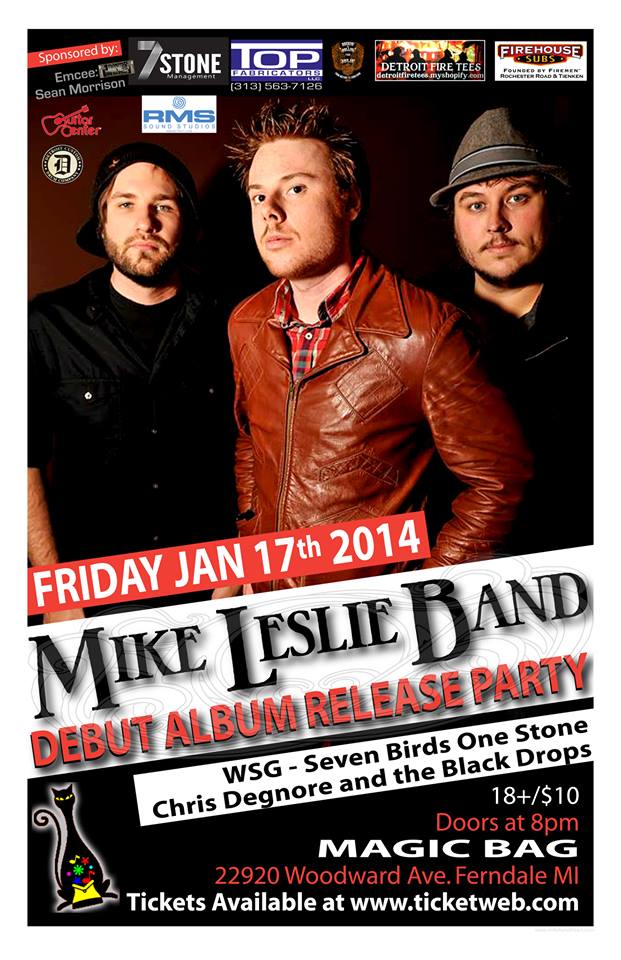 Detroit’s power rock/pop trio Mike Leslie Band will be playing a release show for their debut self titled LP on Friday, January 17 at The Magic Bag in Ferndale, Michigan. They will be joined by Seven Birds One Stone, Chris Degnore and the Black Drops, and emcee Sean Morrison.

Launched in December 2012, Mike Leslie Band took home two 2013 Detroit Music Awards including the coveted People’s Choice Award. This summer saw Mike Leslie Band win the regional crown in DOUG FM’s battle of the bands, heralding their national radio introduction. Mike Leslie Band’s 2013 Thanksgiving Eve show in premiere of the single Weather Vane played to an at-capacity crowd at the historic Magic Bag Theatre and the band shows no signs of slowing down. This band opened for Three Dog Night, Sponge, and Jimmie Vaughn in their first summer and can’t wait to lend their stylistic voodoo to more audiences begging to get amped up for a party.

Listen to the interview with Mike Leslie and Michael Parrot here.

The Mike Leslie Band have been described as the prescriptive result of a peek inside the soul; melodies and harmonies structured with a dash of this and that to mend your heart, with lyrics that get inside your head and let you see yourself from MLB’s perspective. With blues rock jam influences from Government Mule to Stevie Ray Vaughan to Umphrey’s McGee, a splash of velvety blues-soul from Sam Cooke through Gary Clark Jr., the classic bones of John Lennon and Hendrix, and the pop-folk polish of Alabama Shakes, Band of Horses, and Edward Sharpe and the Magnetic Zeros. Over the detailed patchwork brand of rock music to remedy the soul is frontman Mike Leslie’s writing inspiration from classic 20th century American novelists and philosophers. Mike Leslie Band deliver an intelligent and intensely personal debut album.

They will be touring in support of the Mike Leslie Band album in the late Winter and early Spring of 2014.

Tickets for the Album Release Show will be available at The Magic Bag Theatre in Ferndale, MI, and at www.mikeleslieband.com or www.ticketweb.com.