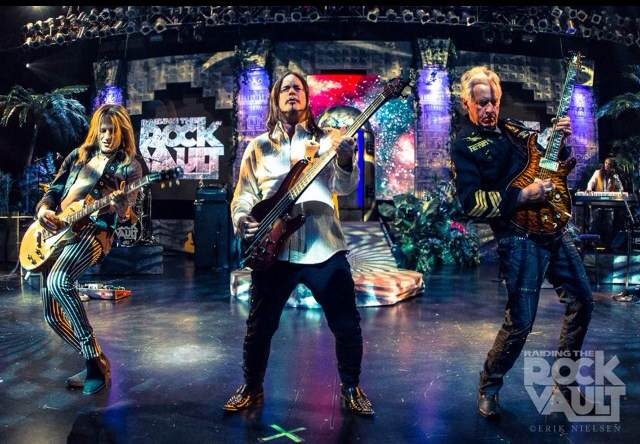 Keyboardist Michael T. Ross has played with rock music icons such as Lita Ford, Hardline, Angel, and Missing Persons. He has traveled extensively playing to countless numbers of fans over the years.Â  Currently, you can find him at the LVH Hotel and Casino in Las Vegas, Nevada performing in Las Vegasâ€™s #1 music production Raiding The Rock Vault.

A virtual time machine of rock classics are delivered, beginning with the Vietnam/tie dyed, 1960â€™s and culminating with everyoneâ€™s favorite Party on the Sunset Strip, 1980â€™s.

From The Doors to Whitesnake and everything in between, itâ€™s all played live; bound together with poignant snapshots of pop culture history, which is performed â€˜Saturday Night Liveâ€™ style by a cast of four actors. Â  You wonâ€™t find lip syncing or backing tracks here. Raiding The Rock Vault is the real deal.

Running five nights a week at 8:00 pm, the guys have a hectic schedule.Â  The night begins with a pre-show gathering in the green room at 7:30 pm for VIP Meet and Greets and photo ops, a quick backstage huddle before the nearly two-hour show, and finally finishes up with a post show autograph session.Â  No rest for the wicked they say and Rock Vault is surely no exception.

It was an adventure just keeping up with Michael, speeding through the underground catacombs and backstage mazes of LVH; immersed in a whirlwind of on the run dining and a quick vapor cigarette before the circus begins. Yet,Â  Michael couldn’t feel more honored or more blessed to be a part of it.

As the show begins itâ€™s second year, I had a chance to speak with Michael about Rock Vault, his career, and what it’s like working with such an amazing group of musicians.

KG:Â  How did you get involved with Raiding the Rock Vault?

MTR:Â  I was working with a keyboard company called Arturia, out of France, and I was performing at NAMM (National Association of Music Merchants) 2 years ago and John (Payne) walked by and I started playing ‘In the Heat of the Moment’ cuz I knew who John was when I saw him because Iâ€™m a fan of his.Â  He kept in touch.Â  He called me andÂ  called me again and then offered me this job.

KG:Â  Did you know any of the other musicians before playing in the show?

MTR:Â  Well Paul (Shortino), cuz he lives in town.Â  I had moved to Vegas 3 years ago from LA and I was writing Carmen, his wife, asking her if I could play with him, she was very kind to me and responded.Â  I was gonna try to play on the King Cobra album, but that didn’t happen.Â Andrew Freeman, a few years ago I approached him to sing on one of my albums.Â  I didn’t know him.Â  He never returned my call! Robin (McAuley),I had met him in the past.Â  He says he remembers me.Â  Jay Schellin, I’ve been a big fan of his, but Iâ€™d never met him.

KG:Â  And everybody gets along?

KG:Â  So, a lot of musicians in general are moving to Vegas.Â  What are your thoughts on that?

MTR:Â  Yeah, I’ve been noticing that.Â  Iâ€™m happy I did it 3 years ago.Â  I feel like I have a little bit of a head start.Â  Thereâ€™s a lot of great musicians from LA that are just now moving here.Â  The LA Guns guys and the list goes on and on.Â  I’ve noticed definitely an increase in musicians that moved out here.Â  I did it too and Iâ€™m happy I did that.Â  I didn’t know I was gonna get Rock Vault.Â  I didn’t know it was going to be here in Vegas.Â  They didn’t know either.Â  We played our first show in November of 2012 at the Mayan Theater in LA.Â  Then for 4 months I didn’t hear anything and then we got the gig here.Â  You know right place at the right time.

KG:Â  And you were already here so you didn’t have to move for it?

MTR:Â  I was already here and looking for a gig.Â  It worked out perfect.

MTR:Â  Yep and LA Guns.Â  I did all that on my month off in December from Rock Vault because we took a vacation. Â  I told myself I wasn’t going to do any gigs!Â  You know, relax.Â  Because we had just finished 200 shows.Â  But, I just want to do it all.

KG:Â  Tell me about your solo album?

MTR:Â  Itâ€™s in the making.Â  I have wished I had a solo album out already.Â  I’ve been playing a long time and playing other peoples music.Â  They say â€œSave it for your solo albumâ€Â  and I did, so itâ€™s definitely time.Â  I have two of them.Â  Iâ€™m in the middle of finishing my piano album right now.

MTR:Â  Itâ€™s all instrumental.Â  And also I have a progressive rock album that I’ve been working on for quite some time.Â  Whenever thereâ€™s a window of opportunity to start working on my stuff I always get booked and contracted for the year.Â  When I left Lita (Ford) in 2012 I said â€˜Ok hereâ€™s a great opportunity to start working on my own stuffâ€™, which I did for a while, but it didn’t last very long.Â  I started getting calls and started going out of state and then I lose sight of it, but itâ€™s something thatâ€™s important to me in my career right now and Iâ€™d like to put that out this year.Â  2 albums.Â  The piano album and the shred album where I can show off technique and my odd time signatures and stuff.

MTR:Â  Yes.Â  I started out for 10 years with a piano teacher when I was 8 years old.Â  From 8 to 18.Â  I studied Chopin.Â  I did a lot of competitions for many years.

MTR:Â  Absolutely.Â  Every day.Â  Almost every single day.Â  Either before work or after.Â  I have to play Chopin.Â  Minute Waltz.Â  Itâ€™s just something that I donâ€™t feel fulfilled at the end of the day if I donâ€™t pay respect to the great composers.

KG:Â  You’ve always played piano and keyboard.Â  Do you play anything else?

MTR: I play guitar.Â  I play bass.Â  I played upright bass for 4 years.Â  One thing I was attracted to playing in Missing Persons was the bass synth.Â  There is bass synth in a lot of songs.Â  I believe in â€˜Armageddon Itâ€™ (Def Leppard) thatâ€™s the bass synth, the keyboard.Â  I wanted to really be strong in my left hand.Â  So I studied bass for many years so I can get in their mind and know how to play great bass lines.Â  Because keyboardists tend to just play high octaves in the left hand.Â  Iâ€™d rather just put my left hand in my pocket at that point and just play with the right hand.Â  The bass is something thatâ€™s most important to me.Â  Iâ€™m a big guitar fan.Â  Iâ€™m a guitarist stuck in a keyboard body.Â  People even look at me and say â€˜ You play guitar?â€™Â  They donâ€™t think I play keyboard.Â  My influences are guitar.Â  I play guitar almost every day.Â  But that is just for my own knowledge.Â  So when I do play with great players Iâ€™m looking at their fret board and I can see what theyâ€™re doing.Â  You know, where theyâ€™re going with it.Â  I can understand it.Â  I can hook up on it instead of going fishing on the note.Â  I just look on the fret board and I can see that theyâ€™re playing a certain chord and I can play that.Â  I did that for my own study.Â  For my own purpose.Â  It helps me in what Iâ€™m doing.

KG:Â  Do you prefer touring or a permanent show?

MTR:Â  I still have the bug in me (to tour).Â  I like to go out and fight for my bunk on the bus and make my claim.Â  Itâ€™s a different way of life and itâ€™s something that I havenâ€™t been on a whole bunch of world tours like the other guys in my band.Â  They’ve been there done that.Â  Theyâ€™ve done it years and years.Â  I feel like I still have some left in me.

KG:Â  Is there a standout moment from the last 200 Rock Vault shows?

MTR:Â  The biggest memory that I have is when we had Lou Gramm with us and Howard was to my left on the keyboards, because â€˜I Want to Know What Love isâ€™ doesn’t have guitar. To my right was Lou Gramm.Â  So between these guys was over 100 million albums sold.Â  It really felt good to be able to stand next to these guys.Â  Itâ€™s an honor.Â  I just really thank John Payne for believing in me.Â  Heâ€™s got great, great musicians in his Rolodex and he picked me.Â  Itâ€™s been working out great.Â  Iâ€™m just really, really happy about it.

KG:Â  What gear are you currently playing?

MTR:Â  Iâ€™m sponsored by Korg, I’ve been with them 10 years.Â  As well as Arturia, from France, that I mentioned earlier.Â  I really love Korg and the history.Â  I have 5 keyboards up there and I run through the history of Korg.Â  I have a Korg Triton.Â  A Korg 01WFD.Â  I have a Korg M3 and the 2011 model Korg Kronos X.Â  You know weâ€™re gear junkies.

KG:Â  When does the show run?

MTR:Â  Yeah.Â  Weâ€™re happy with the addition of Doug Aldrich, from Whitesnake, on guitar.Â  And we give our blessings to Tracii Guns.Â  Heâ€™s amazing and a good friend.Â  But, we do have Doug in the Rock Vault family now and we welcome him.

MTR:Â  Thank you. Enjoy the show!