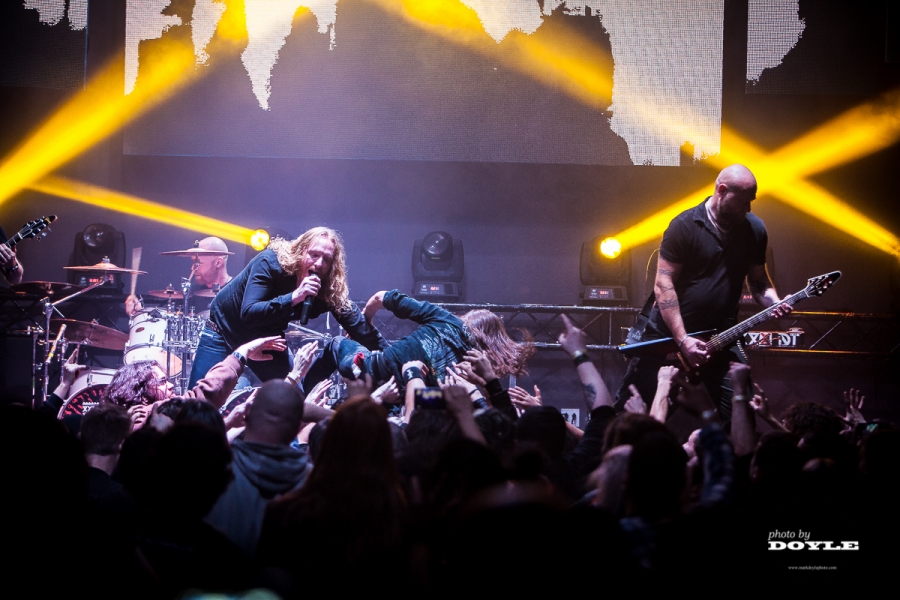 One of the oldest and long lasting melodic death metal bands to emerge from the Gothenburg, Sweden scene, Dark Tranquillity kicked off their North American tour this past week with a stop in New York City, New York at Stage 48. Still riding high on the success of their 2012 release, Construct, they delivered a set list that encompassed their 25-year career.

The music of Dark Tranquillity is that of brutally honest, dark, and insightful honesty, with a powerful wall of sound that layers transcendental melodies and brooding lyrics in a complex formula of music backed by the heavy underlying riffs laying the foundation of their music.

On this North American tour, Dark Tranquillity will be selling a 7″ EP entitled A Memory Construct, which also will be released digitally in the beginning of March. Recorded during the Construct sessions, the 7-inch contains the following two songs and is limited to 500 copies worldwide. Also, it’s on a transparent red wax! The EP includes A Memory Construct and Sorrow’s Architect, previously only available as a limited flexi 7″ released with issue #106 of Decibel Magazine.

The band comments on A Memory Construct single: “This was originally written (as the name implies) as the title track for the Construct album, but was later deemed too different to be included without interrupting the flow of the main record. Sorrow’s Architect is probably our darkest song in a while; a brooding track that gradually builds up to a climatic ending.”

Setlist:
The Science of Noise
White Noise/Black Silence
Monochromatic Stains
Lost to Apathy
The Fatalist
The Silence in Between
Zero Distance
The Mundane and the Magic
Punish My Heaven
The Wonders at Your Feet
What Only You Know
Iridium
Terminus (Where Death Is Most Alive)
State of Trust
ThereIn
Final Resistance
Encore:
Lethe
Endtime Hearts
Misery’s Crown