St. Louis mainstays, Xaemora, look to bring the death metal sound they are known for to Full Terror Assault. We couldn’t be bloody happier.

Dreathus (Vocals, Guitar), HÃ¤rtvaig (Guitar), VonEckhardt (Drums), Vlitir Sarnat (Bass), and Deyanira (Keyboards) make up another great band from St. Louis, Xaemora. Having some good times with the release of Kingdom Venom I and getting ready to play Full Terror Assault 2015, this quintet is ready to unleash some “blazing guitars, shrieking and harsh vocals, atmospheric keyboards, dynamic bass lines, and intensive drums.” Ride along with us as we go over the answers Dreathus was kind enough to give us in a few minutes of spare time he had. Let us know what you think of the piece in the comments below.

NRR: What’s been going on with the band in the last year to catch the Full Terror Assault fans up to speed?
Dreathus: In the last year we’ve released one EP, Kingdom Venom I, got most of the writing done for Kingdom Venom II, opened some cool shows in our local scene, started touring this past spring, and gearing up to hit the road again next month.
NRR: Hopefully you guys have a great time on stage this year. Are you looking forward to anything in particular at FTA?
Dreathus: There are a ton of killer bands on this year, but we’re most excited for our local friends Tyranny Enthroned, Black Fast, and Final Drive.
NRR: Your latest project, Kingdom Venom II, is either done or about to be, right? What makes this album special to you guys and if you will, explain why you choose a two part EP style release?
Dreathus: We chose the route of releasing EPs because we can put a lot more attention and focus into those smaller batches of songs. Since we’re still unsigned it just works out better for us, we can constantly be writing, recording, preparing to release new music, preparing for tours and shows and maintain focus. Most of the writing is done for this next one, after we get home from the next tour we’ll finish it up and start recording either late in the fall or early winter. There’s some fast stuff, some slow stuff, some melodic, some brutal, just black metal as fuck and overall it’s going to be a great representation of who we are as a band right now.

NRR: I can respect that. Talk to me about the band. What does melodic black metal mean, how did the band form, and was is the story behind the name, Xaemora?
Dreathus: Von Eckhardt and I met through a mutual friend in late 2012, I had a handful of songs written and was looking to find some people to help me bring them to life. We emailed back and forth for a week or two talking about what kind of black metal bands we were into and then we just decided to start jammin’, over the next two months Hartvaig and Deyanira joined up and we started working as a four-piece and after a few more months we recorded a demo and then started playing live around St. Louis.
NRR: If FTA rolled out the red carpet, for anyone, that you guys would want, is there anyone you’d love to have onstage for a song or two, and if so who might it be?
Dreathus: Abbath. 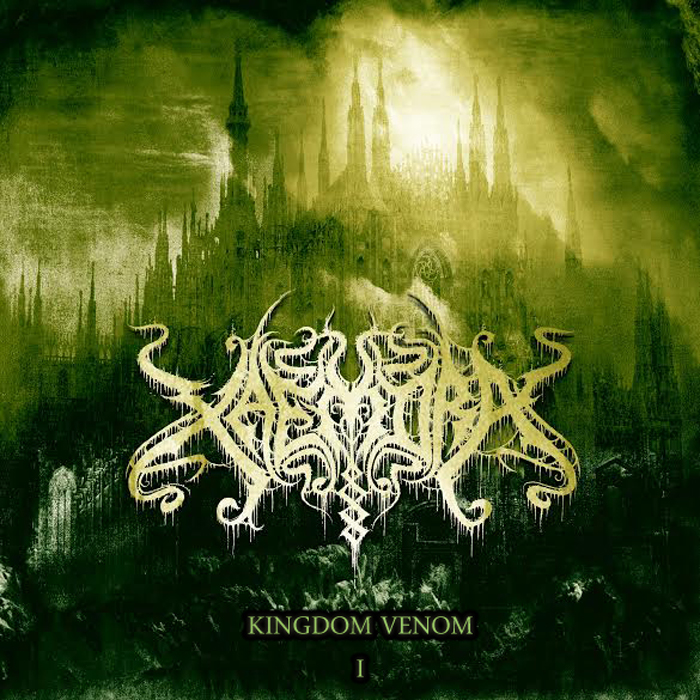 NRR: What can we expect from the band after FTA is a dark, soulless dream of a hateful ex lover until 2016?
Dreathus: Doing a short tour through the southeast and midwest in October, when we get back we’ll get to work recording the next EP, and then I can only imagine more tours after that.
NRR: What exactly is drummer love and why does your photo of it seem like a horrible accident I can’t look away from?
Dreathus: (Laughing), you never know what’ll happen when you run into the Black Fast guys at the bar!
NRR: In your short time as a band, you’ve already seen line-up changes. Does the adjustment to new faces get easier over time?
Dreathus: The only real change has been the addition of our bassist Vltir. We played as a four piece without a bassist for nearly two years so being an addition and not really a change, it was a smooth transition and our sound has improved tremendously with the added low end.
NRR: Ah, got ya. Did the band not rush into playing live purposely, and if so why?
Dreathus: We rehearsed like crazy for nine months before we played our first show, often two to three times per week since we all live so close to each other. It was very important to us to be well rehearsed and prepared before we ever set foot onstage and it worked out quite well.
NRR: How important is the merch table for an outfit like yours, and anything special planned for the FTA legions?
Dreathus: Anymore, everyone is in a band and everyone is selling merch so we try to make our merch table as eye catching as our live show, it’ll definitely be looking especially evil at FTA!