The new album will be supported by a nationwide 8-date UK tour that kicks off at The Stables in Milton Keynes on Monday 20th November.

“You should always get outside of the box,” Samantha Fish says while discussing her boundary-breaking new album Belle of the West. “Challenging yourself is how you grow.” 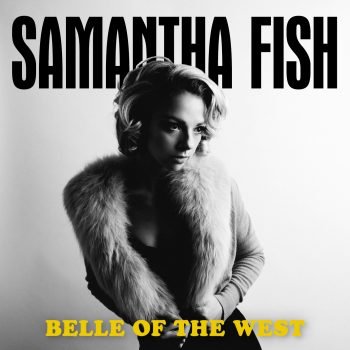 After launching her recording career in 2009, Samantha quickly established herself as a rising star in the contemporary blues world. Since then, the charismatic young singer-guitarist-songwriter has earned a reputation as a rising guitar hero and powerful live performer, while releasing a series of acclaimed albums that have shown her restless creative spirit consistently taking her in new and exciting musical directions.

Having already made it clear that she’s more interested in following her heart than she is in repeating past triumphs, Samantha Fish delivers some of her most compelling music to date with Belle of the West, her fifth studio album. The deeply soulful, personally charged 11-song set showcases Fish’s sublime acoustic guitar skills as well as her roots, emotionally resonant song writing.

Fish recorded Belle of the West in the relaxed, rural creative atmosphere of the legendary Zebra Ranch Studios in the North Hills of Mississippi with producer Luther Dickinson (of North Mississippi All-stars fame), with whom she worked previously on her 2015 album Wild Heart.

“I wanted to do this acoustic-electric record, and tap into the style and swagger of Mississippi,” Fish states, adding, “Any time you dive into another place, another vibe and a new group of people, you’re challenging yourself to grow musically. I felt very at home a Zebra Ranch, and I’ve known Luther and Malcolm for years, so it was a very comfortable situation. When you’re making a record like this, it has to feel natural if you want people to respond to it.