The pounding beats of a demon crazed drum kit echo to the grindcore tempo. Pete “Commando” Sandoval must be in the house to talk Terrorizer.

Pete “Commando” Sandoval (drums), Lee Harrison (guitar), and Sam Molina (vocals/bass) make up this version of Terrorizer. Pete and Lee were good enough to stop by and give National Rock Review some love before hitting Full Terror Assault 2015. They talked about coming plans, fallen comrades, and when enough is enough.

NRR: What’s been going on with the band in the last year to catch the Full Terror Assault fans up to speed?
Pete Sandoval: We’ve toured quite a bit, done some big festivals all over the word and are now working on new material for upcoming Terrorizer album hopefully to come out by the end of this year.
Lee Harrison: Yes, Indonesia was a big trip for us this year. Very cool indeed.
NRR: Hopefully you guys have a great time on stage this year. Are you looking forward to anything in particular at FTA?
Pete Sandoval: Yes! We are so excited and ready to deliver an extreme, brutal, and memorable concert to all fans that are coming to see us.
Lee Harrison: I think this should be a good one since America doesn’t get too many festivals like this. Seems like it is geared for the underground scene too and not over commercialized like some mainstream festivals.
NRR: How did you get “Horde of Zombies” into Rockband 3?
[bandcamp width=100% height=42 album=134743742 size=small bgcol=ffffff linkcol=e99708]
Pete Sandoval: I have no recollection of that, I believe they contacted us during that time and eventually a deal was worked out.
NRR: Does the anniversary of Pintado’s passing, Aug 27, 2006, get easier to deal with over time or does it still feel like it did that day?
Pete Sandoval: Hmm. it still haunts me up to this day the thought that he’s really gone out of this world and it saddens me of how hopelessly, miserably, and horribly it happened. I pray God has mercy on his soul and give comfort, courage, and hope to his still-grieving family. I think that we should all learn from this and other such terrible incidents in life and start doing something about it. Many are the ones heading the same path which Jesse took, unfortunately, but I believe only God can help! Unfortunately they don’t believe, they refuse to, no one is seeking God; therefore the god of this world (Satan) is winning this battle by taking many lives with him and destroying thousands of families each year…. Come on you people, open your eyes, stop serving a god that only wants to destroy you, your family and friends… Well, I’ll keep on praying for you all.
NRR: If FTA rolled out the red carpet, for anyone, that you guys would want, is there anyone you’d love to have onstage for a song or two, and if so who might it be?
Lee Harrison: Too many to list… yet no one in particular…
NRR: What can we expect from the band after FTA is a dark, slithering terror of a sleeping metal monstrosity until 2016?
Pete Sandoval: Hopefully a new album soon.
Lee Harrison: It’s hard to say for sure because time has a way of slipping by before you know it. As Pete said though we have about ten new songs now and were ready to record, almost, just need to work out the business details and it should be happening fairly quick.
NRR: Is there a band or bands on this year’s FTA line-up that you are looking forward to seeing as fans?
Pete Sandoval: Not me, what about you Lee? Sam?
Lee Harrison: It will be cool to see my brothers in Obituary, of course. Other than that I am focused on delivering a solid show and not be distracted by other bands.
NRR: For new fans seeing your set for the first time, what does apocalyptic, brutal, grindcore translate to musically?
Pete Sandoval: Musically I describe it as extremely super fast, hard hitting drumming with down-tuned low, heavy sounding guitars and angry, screaming for vengeance vocals.
Lee Harrison: Brutal, no frills, in your face, heavy, all the good adjectives! 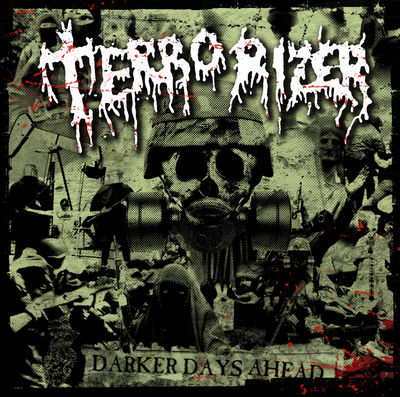 NRR: For you guys, what is the magic between you and the crowd? Is it just the need to have fun, the stage presence, or all that and more?
Pete Sandoval: For me it’s my playing style and the way I play what connects me to the fans.
Lee Harrison: All that and more! Of course. It’s hard to put into words better to just witness the devastation. People love hearing these songs played and so it’s always cool to see the reactions.
NRR: In the many years Terrorizer has been around, what might be the most bizarre, strange, or simply hilarious experience that comes to mind? A Spinal Tap moment if you will?
Pete Sandoval: I don’t have one in mind. I’m sorry.
Lee Harrison: So far it has been the Brazil tour of no sleep. Just going from the gig to the airport to the sound check to the hotel to change and go to dinner then back to the venue for the gig. No sleep. That last a few days and we had to finally say enough. It could have been worse, but it was definitely challenging.