Chunky riffs, anthemic choruses, and a singular focus on getting asses out of seats satisfies the primal thirst. Must be Final Drive up next.

Nathan Easter (Guitar), Chris Nanney (Guitar), Jordan “Break a leg” Gaw (Vocals), Alex Wheeler (Drums), and Ray Tucker (Bass) make up this little spunky five piece from the St. Louis, MO area that has been tenderizing the Gateway To The West since 2002. This Southern groove thrash metal outfit has a bit going on at the time of this interview. Evil fencing, a new No Sleep Til Waffle House Tour, a new album, Lifeswork, and ending this cycle with a Full Terror Assault 2015 appearance on the National Rock Review Stage is a good way to go crazy fast. Well, more so then they are now, but we digress. Enjoy our time with Jordan as much as we did. And do us a favor, if you see him yell out Dave Grohl to him like it’s his name. He’ll appreciate it and maybe even sign stuff!

NRR: What’s been going on with the band in the last year to catch the Full Terror Assault fans up to speed?
Jordan Gaw: Final Drive has been very busy over the last year, mostly extensive touring in support of our latest album, Lifeswork on BloodRed Recordings and came out November 2014, but we’ve also signed with new Management, DME Management out of Connecticut. Which is a pair of managers that include Charlie Bellmore Guitarist for Toxic Holocaust, Jasta, and Kingdom of Sorrow. Charlie will be producing our new record this winter which we’ve already started demoing material for. Very exciting and hard working times in the FD camp, lots more to come!
NRR: Hopefully you guys have a great time on the National Rock Review stage this year. Are you looking forward to anything in particular at FTA?
Jordan Gaw: We’re honored and feel very privileged to be a part of FTA and to grace the National Rock Review stage, honestly I’m just looking forward to the whole experience. It’s gonna be so much fun. We’re absolutely stoked!
NRR: Your latest release, Lifeswork, is out, right? What makes this album special to you guys and what should fans take away from it after snagging their copy of it?

Jordan Gaw: That is correct. Lifeswork is our latest release. Produced, recorded, and released 100% independently by our own hands and is out now. This album feels like everything snapped into place for us. One thing we always strive for is to catch the live energy we have on stage in our recordings. It’s a challenge but with each release we get closer and closer. Lifeswork feels right and we’re very proud of that record. I think the listener will feel the intensity right off the bat with the opening track “Run For Your Life and from there get a new but old school feel of metal that might be missing from new music selections released today.
NRR: I’m going to go out on a “limb” here and guessing the well wishing phrase “break a leg” is banned now? I hope it was done as metal as possible, but how are things besides the show cancellation?
Jordan Gaw: (Laughing), oh boy, talk about a bum deal. I just got a out of surgery yesterday, everything went great, just gotta rest and heal up. Talk about shitty timing though. We’re about to head out on a 30 plus date tour with IKILLYA and just when I was thinking, Hey this tour is gonna be so smooth, Jason from IKILLYA has been so amazing with setting this up, it’ll be such an easy ride” then BAM! Stepping over a stupid temporary fence at a festival we played Aug 22, 2015 everything changed, not metal at all! But I’m staying positive and besides a little less movement on stage I’ll be just fine. Never broke a bone in my LIFE before now and I definitely do not want to experience it ever again but the show must go on. Besides, after a few Dave Grohl jokes I’ll be just fine and dandy. I have metal literally inside of me now, (laughing). Other than Little Rock, AR all other shows will be just fine, we hated to cancel it but for the sake of the tour we had to sacrifice that one show. It’s a bummer but we’ll make it up to them. Lucky our buddies in Red Devil Lies are covering for us, so all is gravy baby! 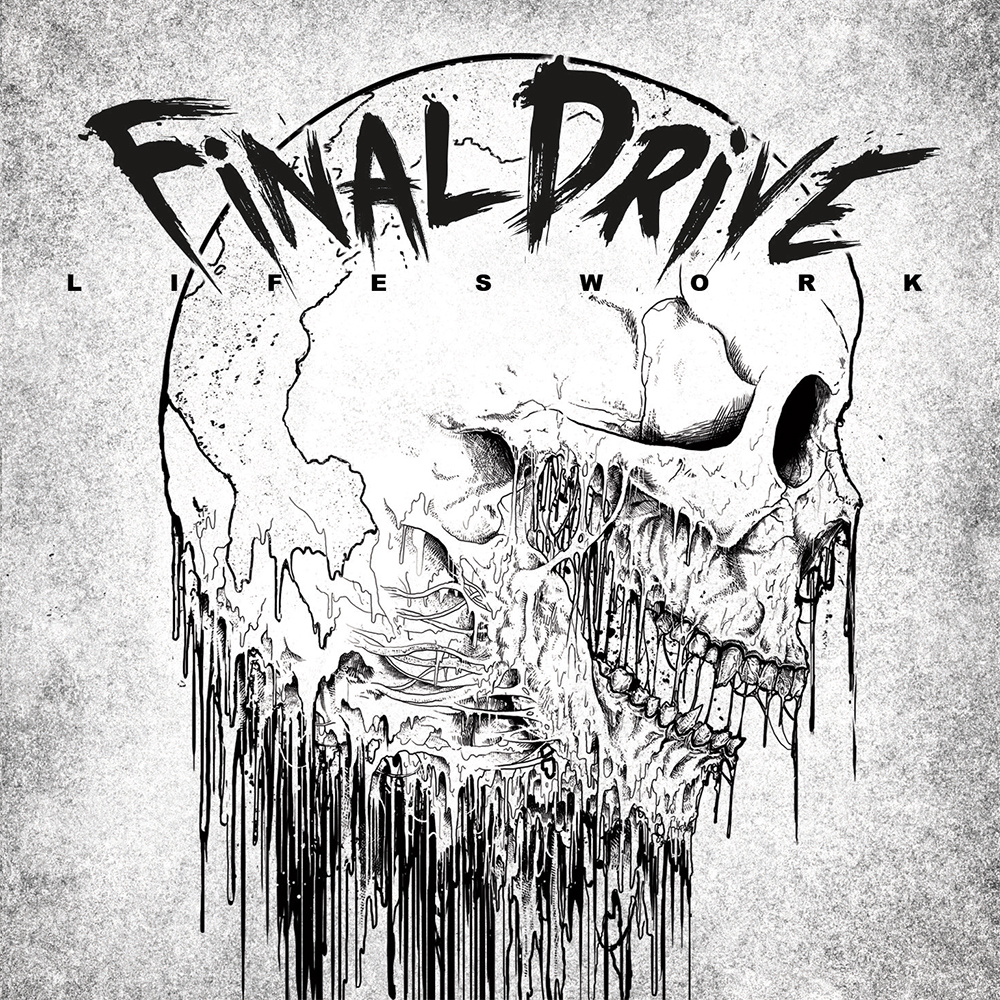 NRR: So, that’s why you stuck with answering these, (laughing). If FTA rolled out the red carpet, for anyone, that you guys would want, is there anyone you’d love to have onstage for a song or two, and if so who might it be?
Jordan Gaw: Oh wow, let me see, what a great question to stir the imagination. Mark from Misery Index would be awesome to have rip it up with us. He’s an old friend of mine going way back in the STL and Columbia metal scene. In my wildest dreams to hear John from Obituary sing with me would rule all things or Jimmy Bower rocking some drums or guitar would kill too. Aaron fellow STL metalhead from Black Fast ripping some leads or Michael Scott from Carnivora doing some vocals. Then a massive bong rip with anyone from Cannabis Corpse, (laughing). Great question man, that was fun to answer.
NRR: What can we expect from the band after FTA is a dark, slithering dream of a sleeping metal giant until 2016?
Jordan Gaw: (Laughing)! More touring! We go from FTA to both east and west coast with IKILLYA through Oct 17, 2015. New Album for sure! World domination, (laughing), and hope to see some overseas touring in 2016 as well.
NRR: Is there a band or bands on this year’s FTA line-up that you are looking forward to seeing as fans?
Jordan Gaw: Man, I love metal, all kinds of metal. A fan I am number one. Looking forward to HELLBENT, IKILLYA, XAEMORA, VALIENT THORR, BLACK FAST, NASHVILLE PUSSY, CANNABIS CORPSE, REVOCATION, MICAWBER, and OBITUARY. Just to name a few!
NRR: Love the No Sleep Til Waffle House tour and artwork that is with it. How did the tour come together, who is going out with you, and is for support of the newest CD? 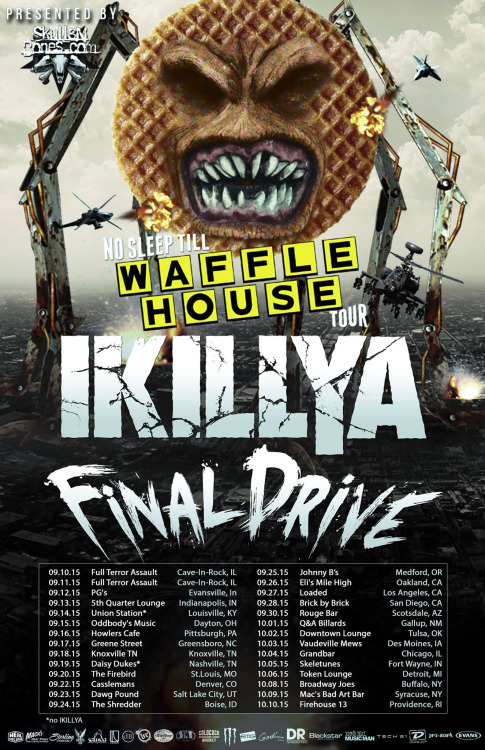 Jordan Gaw: RIGHT! Fun stuff for sure. This tour is really the brain child of Jason from IKILLYA. Ray, our bassist, hooked up with Jason end of last year and got the wheels turning for this tour. I stepped in once we got everything in motion and assisted Jason from there. IKILLYA has a few dates leading up to FTA without us, but then from there it’s just us two on the run utilizing the best local support we can find in each city. Venues and promoters have been great and everything came together really really smooth. Jason has just been amazing to work with and we can’t wait to get out there and kill it with those guys. We are definitely still touring in support of Lifeswork and the set list is comprised of mostly material from that record, with a couple oldies and new demos mixed in.
NRR: What kind of items can fans grab to show support at your merch table and is selling merch a big deal for the band?
Jordan Gaw: Oh yes! Merch! We love our merch and we love our fans to represent us every chance they get. Tees, tanks, hoodies, cooler cups, belt buckles, hats, and more. Bust open the piggy bank and bring those doll hairs people! We want you walking out looking damn good in some new Final Drive swag, (horns).
NRR: Dynamic southern groove thrash metal will translate into what sonically when you’re on the NRR stage for fans?
Jordan Gaw: Pounding drums, grinding guitars, intense screams, a non stop head banging FUCK YEAH METAL moment in time! It’ll trap you in for the duration and leave you wanting more! That’s a promise! We’ll see you there!