It’s good to see 80s era thrash be represented well. The guys in Protest handle the responsibilities well and they have big feels for friends.

So, the current line-up for Protest is Jason Burris (vocals), Jason French (guitar), Ronnie Sterling (guitar), Cebo (bass), and newcomer Michael Arellano (drums). This Dallas, TX five piece has a few irons in the fire. New album(s), The Invisible Hand Part 1, breaking in a new drummer because we all know drummers spontaneously combust, and playing Full Terror Assault 2015 shortly. The Jasons gave National Rock Review some incites into the band, what’s to come, and a good suggestion for when you want a fat chicken sandwich when you’re way out southwest.

NRR: What’s been going on with the band in the last year to catch the Full Terror Assault fans up to speed?
Jason Burris: Around this time last year we had just finished recording 14 new songs which make up three new E.P.s weâ€™re putting out, The Invisible Hand parts 1, 2, and 3. Outside of that, playing whenever we can to pay the bills. Just of late weâ€™ve played a killer string of shows with Crowbar, Lord Dying, BattleCross, Deadhorse and Warbeast. Not to mention the album release party for the first E.P. Oh, and we just picked up a new drummer, Michael Arellano, who up until recently was playing for M.O.D. Mike is the man! Itâ€™s been a busy year.
Jason French: Like Burris mentioned, its been a busy, yet productive year finishing the new album and getting a few shows under our belt. We have a ton of new material weâ€™re dying to play for as many people as possible so the rest of the year and looking forward to next year looks to be very busy.
NRR: Hopefully you guys have a great time on stage this year. Are you looking forward to anything in particular at FTA?
Jason Burris: Weâ€™re super pumped about FTA. Mostly getting in front of some new faces and hopefully gaining some new fans.
Jason French: I canâ€™t wait to play the inaugural show of this festival. It’s about time the U.S. has had a festival like this on our shores. There are several bands Iâ€™m looking forward to seeing. One in particular, is Gruesome who features our buddy Gus Rios on drums. Gus recorded the drum tracks on our previous album, The Corruption Code. Seeing him perform is going to be awesome!
NRR: Your latest release, The Invisible Hand Part 1, is out. What makes this album special to you guys and what should fans take away from it after snagging their copy of it?
Jason Burris: I think for me, this EP and the next two that will follow, really capture our sound. Itâ€™s a little more raw than our first release. Kerry Crafton, who mixed the final Rigor Mortis album, got in there and really helped shape it into something great! And this first EP really sets the stage for the next two which I think are total shredders. So look out!
Jason French: I am personally very proud of this album or series of albums, if you will. It was a tireless culmination of writing sessions spanning 18 months. The band and myself have gone through some tough times the last couple of years and the songs are indicative of that in my opinion. Weâ€™ve evolved in some ways yet stayed true to what we do best which is an onslaught of face ripping metal.
NRR: A lot of bands on this billing have Texas roots. Is it the scene, the fans, or both that make it such a hotbed for metal in all of its forms?
Jason Burris: Texas has always been awesome for putting out some great metal bands. The no brainer being Pantera. But you have a lot of great Texas metal, Rigor Mortis, Gammacide, Crucifix, Deadhorse and ABSU for example. And the newer generation, bands like Warbeast, Chemicaust, Steel Bearing Hand, Electric Vengeance and Kill the Client. The scene may fade out of the spotlight as trends change, but Texas metal fans are super loyal and totally hardcore and never let it die.
Jason French: Texas is an awesome, massive state with a ton of talent; always has been and always will be. Everybody loves Texas and Texans. Weâ€™re a friendly, fun bunch of people that want to rock out and have a good time and no matter where you go youâ€™ll always meet a Texan. The state has a vast and diverse musical history and people from all walks of life embrace that heritage. 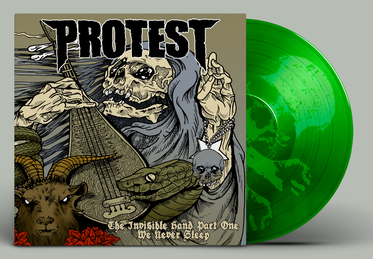 NRR: If FTA rolled out the red carpet, for anyone, that you guys would want, is there anyone you’d love to have onstage for a song or two, and if so who might it be?
Jason Burris: If FTA could make a time machine, then it would be Cliff Burton era Metallica haha. Or the original line up of Sepultura. Oh and pretty much any band fronted by Mike Patton. But FTA has so many bands we love already we ainâ€™t complaining!
Jason French: It would be really cool if Dave Lombardo was with Slayer and they were playing FTA this year. Thatâ€™s as lofty of a dream as having Cliff Burton like Burris said. Being invited to the fest and being able to play it is going to be awesome and we couldnâ€™t be happier about doing it. I hope its full blown success and we get invited back to play next year and the year after that.
NRR: What can we expect from the band after FTA is a dark, slithering dream of a diseased metal rattlesnake until 2016?
Jason Burris: Weâ€™ve got of handful of shows on the books to wrap up 2015. One really important one is for our good friend Bruce Corbitt of Warbeast. Heâ€™s had a bit of a tough time with his health and a bunch of bands are pulling together for a benefit in Fort Worth, TX to help him out with medical costs and such. We go way back with the guy and he and Warbeast have been big supporters of Protest. So itâ€™s the least we can do. We may not have even been playing FTA if it wasnâ€™t for Bruce. So getting on that bill was a no brainer for us. You can also help by going to, here.
Jason French: Weâ€™ll be putting the finishing touches on The Invisible Hand parts Two and Three and release those late this year or early 2016. And with Mike on drums now weâ€™ll be booking a few more shows before the year is over to give him a real Protest-style initiation.
NRR: Is there a band or bands on this year’s FTA line-up that you are looking forward to seeing as fans?
Jason Burris: Iâ€™m looking forward to seeing Gruesome. Iron Reagan also, I missed them when they played Dallas last.
Jason French: Iâ€™m looking very forward to seeing Iron Reagan and Obituary. Iâ€™d love to see Napalm Death but weâ€™ll be playing Little Rock the night they perform. The fest is going to be awesome all all around and Iâ€™m looking forward to taking as much of it in as I can.

NRR: What’s the history on the band? How’d you form, how’d you choose the name, what bands influenced you, etc?
Jason Burris: Mr. French can probably give you the best insight on the band name and formation leading up to where we are now. Influences though are easy. Slayer, Kreator, Napalm Death, early Sepultura and 80s era Metallica. Some of the old New York Hardcore, like Agnostic Front. Kind of all over the map, but mostly metal that came out of the 80s. Thatâ€™s what we grew up on and I think most people will hear the influences right off the bat.
Jason French: I formed the band in late 2003 in Dallas with our bass player, Chuck Miller. From that time, we have had a slew drummers and lineup changes. Jason Burris is the original vocalist and Ronnie Sterling is the original rhythm guitar player. I was the sole guitar player until 2005 when I brought Ronnie into the fold when his previous band, Bloodties, broke up. Ronnie and myself have a very strong musical chemistry thatâ€™s just as powerful as King/Hanneman, Hetfield/Hammett or any other dual guitar attack from any classic thrash or metal band. This is by far the band Iâ€™ve always wanted to be in and its quite an accomplishment weâ€™ve last as long as we have.
NRR: How important is selling merch for you guys and what’s good to buy off your table?
Jason Burris: Iâ€™d say what weâ€™re pushing the most right now is the new E.P. We did a limited edition run on vinyl everyone seems to be digging. But obviously merch is super important being weâ€™re still self financed at this point. Every bit of money goes back into the band, be it for new shirts, recording costs, gas money, the bass player’s prostitute habit, and a steady supply of Williams Chicken, if you ever visit Dallas, get some Williams Chicken.
Jason French: Merch is the single most important part of this band as it it is for most bands. It’s the life line between the band and the fans and its especially important when playing far away regions such as FTA where nobody has ever seen or heard us. We hope people who do see us in other markets will enjoy our show enough to pick up a shirt or CD and turn their friends on to us. I love chatting with new people I meet at the merch booth at our shows and talk about what they thought of the show and what other bands they like.
NRR: What’s one thing the guys would fight to the death to have the last one of while out on the road, (laughing)?
Jason Burris: I think the default answer is the last beer. But, Iâ€™ll say a hot shower.
Jason French: The last piece of chicken from Williams.