Diamonds are precious stones hidden for thousands of years. Death Sweats is a little rock that you shouldn’t overlook, so read on.

War Baby is a Vancouver three-piece made up of nunchuck-swinging, sewer-exploring Canadians. The lineup includes Kirby Fisher (drums), Brock Allen (bass, lead vocals for tracks four, eight, and ten), Jon Redditt (guitar/lead vocals), and special guest Andy Bond (bass on tracks four, eight, and ten). Their latest album is a gem not to miss. While it dropped on Oct 30, 2015, Death Sweats is one of those albums that hasn’t gotten its fair share of the spotlight so far this year since its release.

For those not yet familiar with the band, let me share with you a bit of their bio. “War Baby was born in 2008 in the grimier passes of Vancouver, finally releasing its debut album Jesus Horse in 2013. That year the band was selected for many end-of-year lists (including Huffington Post’s top ten Indie albums of 2013) and War Baby became the 30th anniversary winners of Vancouver’s prestigious Shindig! Contest (put on by CiTR, the home of Nardwuar). That year also saw the band travel to play in China, including a date at Qing Dao’s Intercity Music Festival, as well as a tour throughout Western Canada with Invasives. 2014 was no less eventful, and War Baby crushed audiences at spring festivals such as Sled Island and Canadian Music Week as well as further tours with Invasives. 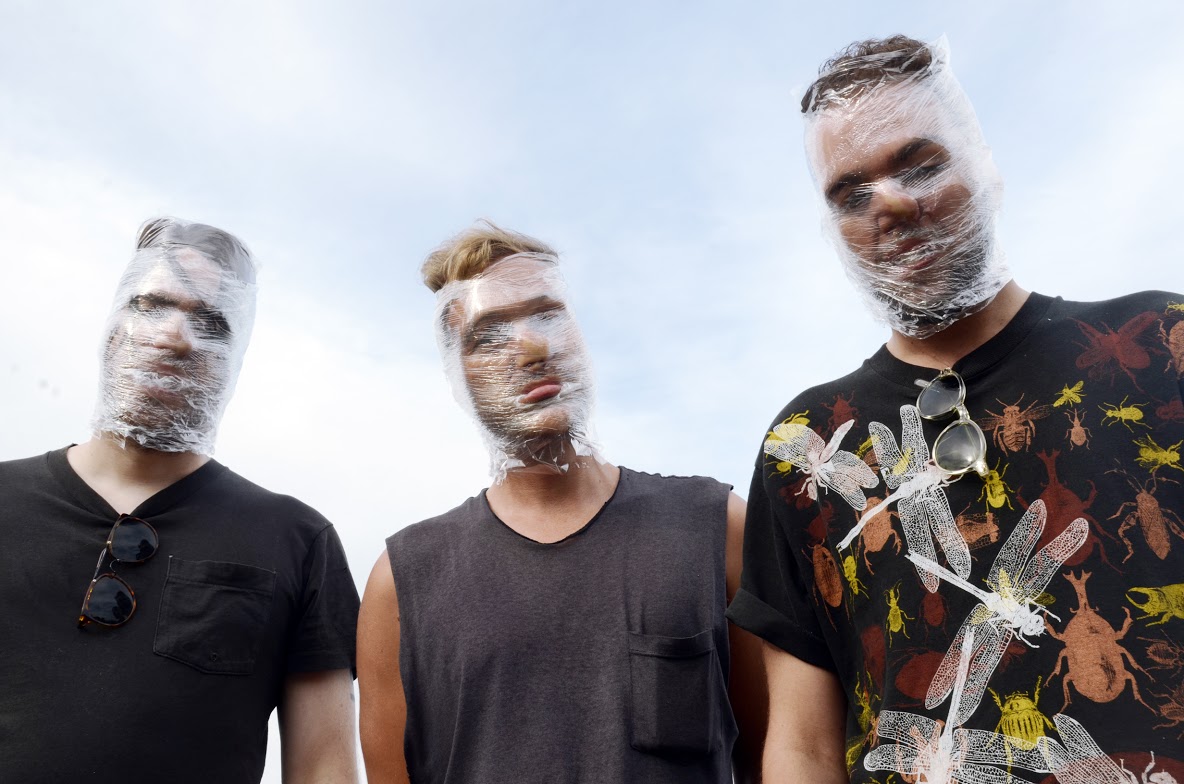 Throughout its history War Baby has been fortunate to share the stage with local Vancouver legends like White Lung, Mystery Machine, and SNFU and out of town greats such as Big Business, The Blind Shake, King Tuff, Helms Alee, The Men, and, most recently, Eagles of Death Metal.”

As a side note, if the last band sounds somehow more relevant, they recently made news when their concert venue was a target of the Paris, France Bataclan theatre 2015 shooting. 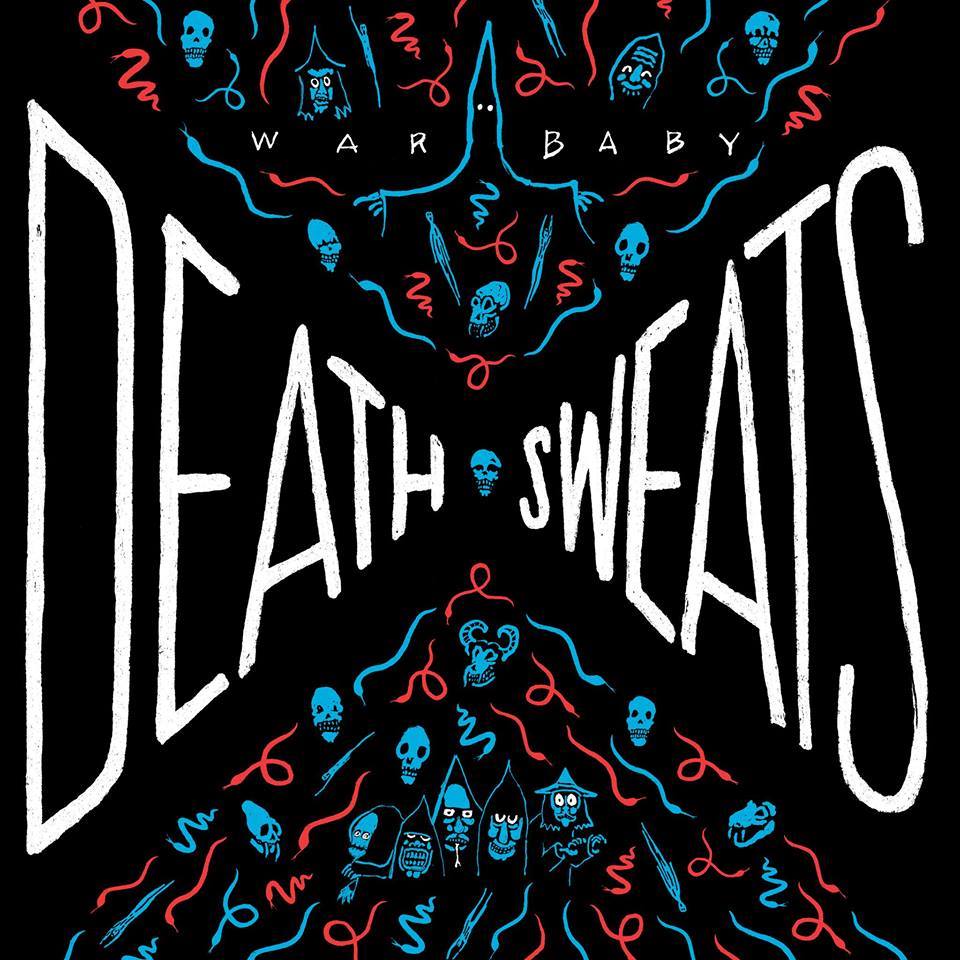 The band recorded Death Sweats at the Noise Floor Recording Studio with producer Jordan Koop and Bob Weston handling mastering. Physical copies of the album will come with the Death Sweats board game, featured on the back of the Death Sweats LP jacket. Players will cut out their game pieces from an insert included with the LP, and a streaming video featuring characters (like the Death Master, Kang – Guru and Machete Man) played by the band will control the game. Twists including a count-down clock, interruptions, and challenges during the game-play will reward or punish players. A video trailer for the Death Sweats board game is available on YouTube.

â€œLyrically, Death Sweats comes from a pretty dark place. All three of us agree that, generally speaking, it’s an album about anxiety. More specifically, I think it touches on personal experiences like poverty, both Brock and I work in social housing in the Downtown East side of Vancouver and are exposed to a lot of emotionally taxing things. In terms of music, I think we stepped away slightly from our last album, Jesus Horse, with the addition of Brock’s playing and three songs penned by him. Also, we wrote and arranged a lot more critically and collectively, which was awesome. Then lastly, the â€˜art directionâ€™ (the Death Sweats board game) was influenced by black humor and just wanting to not take the whole thing too seriously.â€ ~ Jon Reddit

The new album is ten tracks long and comes in at about 36 minutes in length. Besides digitally via download card and other online vendors, this record is also out on a cool vinyl pressing (see below) with an interesting game attached to the LP as stated to above.

This band has seen its fair share of pigeonholing as far as nailing down their sound. To try and do that isn’t necessarily fair, but the band can be summed up with the label of grunge meets mature punk on this CD if you need to know what section to find it in at your local music shop. 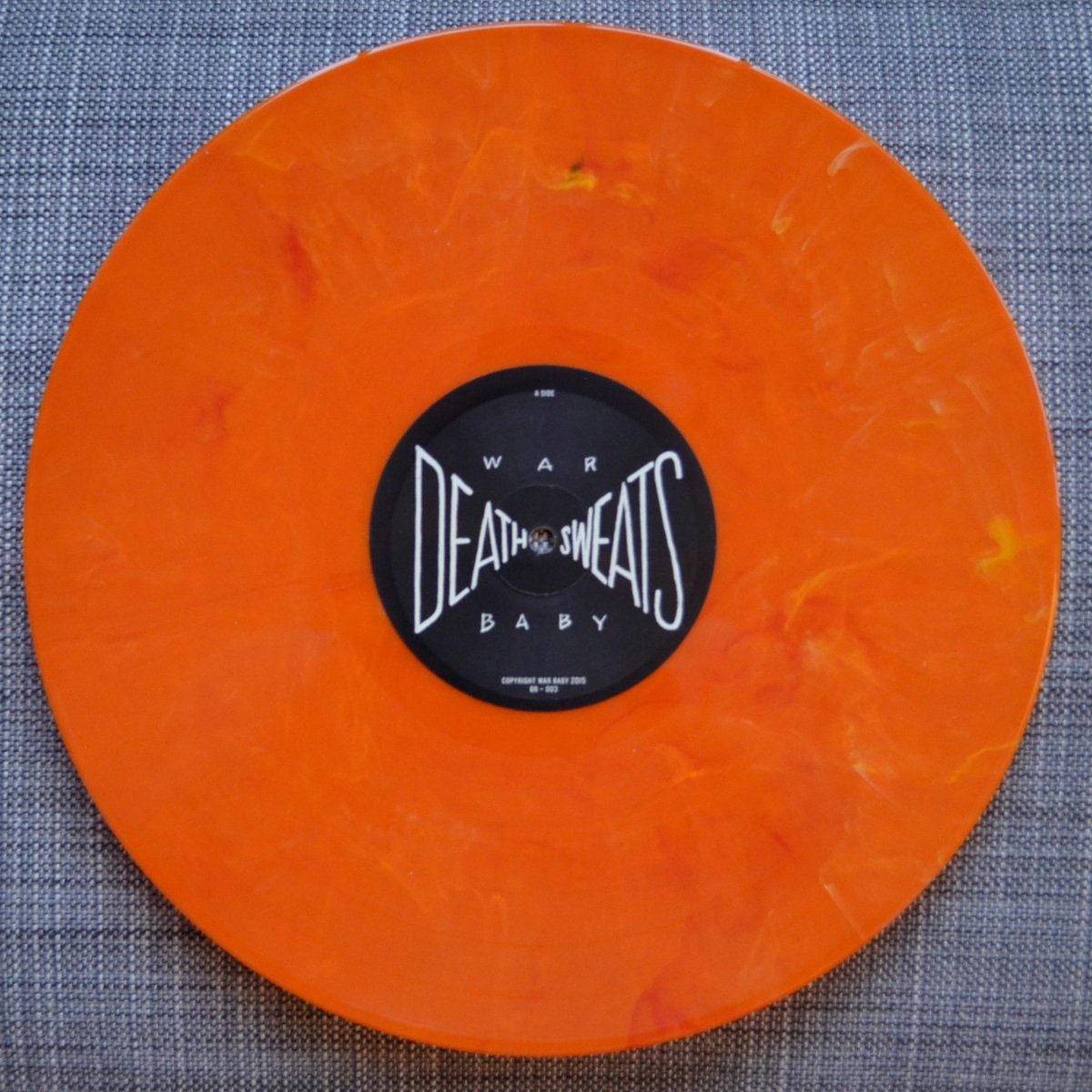 The first track on the second LP is “Master Blaster,” which is presented to you here for your listening enjoyment. Yes, this is a very strong influence of the Seattle grunge sound. Yes, Kurt would feel like this little vibration of sonic noise would fit well next to Bleach on the iPod. And there’s no doubt that saying Lightning Bolt covering a Nirvana cover of a Black Sabbath song is a good way to describe them, indeed.

Brock’s bass lines are fantastic in “Spell.” The mix of three people instead of four or more is apparent because grooves of soul funk are more pronounced with Jon wearing two different hats on this cut. Speaking of which, Jon has that dirty, my-soul-is-tired sound to his vocals. And while it pays homage to a man that killed hair metal almost by himself, the band (with Kirby’s excellent drumming) add a concrete punk infusion that flavors each song to make it a sound wholly theirs alone.

And in the spirit of Ol’ Mister Rotten himself, the more punk side of the band shows itself with “God Is Dead.” Take lyrics sure to send the old fogies into a nosedive, with not the cleanest vocals ever put on a record, and end it with a classic sound tribute to what gave punk its distinctive style; you’ll have a pretty good song if that’s you an arsenic-laced cup of tea.

For those that remember the days of grunge and enjoyed them, we highly recommend this album from our northern brothers. If you’re a fan of the punk sound that still has an edge to it, we think you’ll like this one a great deal. And, if you’re an adventurous type looking for a new place to pick up something different, we mischievously suggest taking that chance with Death Sweats. If you picked up a copy already, played the board game, or have seen the band live in support of this drop, please let us know what you thought about any of it.