When Here Comes Spinal Tap meets Dethklok, you might run into Jani Huttunen. No shame, no regrets, and no signs of slowing down anytime soon.

The current line-up of Inferia is Jani Hude Huttunen (vocals), Kalle Lindfors (drums), Vili KÃ¤hÃ¤ri (guitar), and Sami Heinonen (bass). This Finnish quartet is headed back to the States for mayhem, beer, and naked women. And, maybe to play a few dates starting shortly along with Full Terror Assault 2015, but we have a feeling it’s more for the women and beer. Jani did his best to talk with us and the ensuing interview has to be one of the most surreal ones I have done. It’s graphic, it’s wandering in the wilderness at points, and it is freaking hilarious all at the same time.

NRR: What’s been going on with the band in the last year to catch the Full Terror Assault fans up to speed?
Jani Hude Huttunen: Well, this is our third time this year that we are coming to the USA. In June we played at Las Vegas Death Festival! Maybe there will be the same good people in Full Terror Assault too. Last year was our 25th anniversary and we did a big South American tour for like two months and 33 gigs there. It was awesome! Brazil, Argentinaâ€¦ and more, we saw many fans all over.
NRR: Hopefully you guys have a great time on stage this year. Are you looking forward to anything in particular at FTA?
Jani Hude Huttunen: I’m sure that we have a great time on stage, we will play every time for fans and 110% and we don’t mind if you wanna come on stage with us and jump! Also, beer and naked women.
NRR: In the 25 plus years the band has been together, looking back, would you guys have done anything differently?

Jani Hude Huttunen: Yes, this is our 26 inch and long time. As John Holmes’ wife says when a reporter asked her, “How you get every inch inside of you?” “If I tell you, I have to kill you.” When I was a little boy and got my huge erection I started a band called, Das Reich. We did only one demo in 1986, then in 1989 I put up Inferia to the metal scene. I’m an original member and there has been member changes since then. Our other members have some side project bands like our guitarist, Vili, plays drums in a band called, Cut To Fit. Also, our bass player plays guitar in a band called, Necropsy. Our drummer plays drums in a band called, Plaguebreeder. And Sami Heinonen, our bass player, plays guitar in that band too. Tatu HÃ¤mÃ¤lÃ¤inen replaces Sami Heinonen on Full Terror Assault festival and other gigs we will do there in September with Skinned. We start this tour September 2. The first gig is in Chicago!
NRR: Got it. Fistament, came out in 2014, right? Any chance of new music for fans when you play?
Jani Hude Huttunen: Yes, it is Fistament, Fistress, hhhmm, same year we release a seven inch EP too called, Gloryholes Hallehlujah with Finnish grind act Cannibal Accident. Maybe we will play some new material too. It is always a great time to show your new dick, I’m mean song, I promise! We will play a new song for you at FTA!
NRR: If you had to describe your sound as it is now, how would you do it for someone about to hear you for the first time?
Jani Hude Huttunen: Grind with death balls elements and it depend what The Porn off view your hear it. Good show. Energy. I don’t think we sound like a typical grind band, because of our guitar sounds, it’s all power! And of course we are there in Full Terror Assault Festival and we wanna have good quality of sound as much as possible when we play! So be ready there!!!
NRR: What can we expect from the band after FTA is a dark, glimmering pile of ashes on the metal altar until 2016?
Jani Hude Huttunen: I don’t know, pussy first, then we’ll try to go a studio in 2016 to record new “orgymaterial”. We have spoken with our new friends about coming to USA again in 2016â€¦ Like New York and touringâ€¦. we are ready to come back and we hope that everything is going well on that. Yeah. We have also confirmed a Festival gig in Czech in 2016. It called Nice To Eat You Festival. 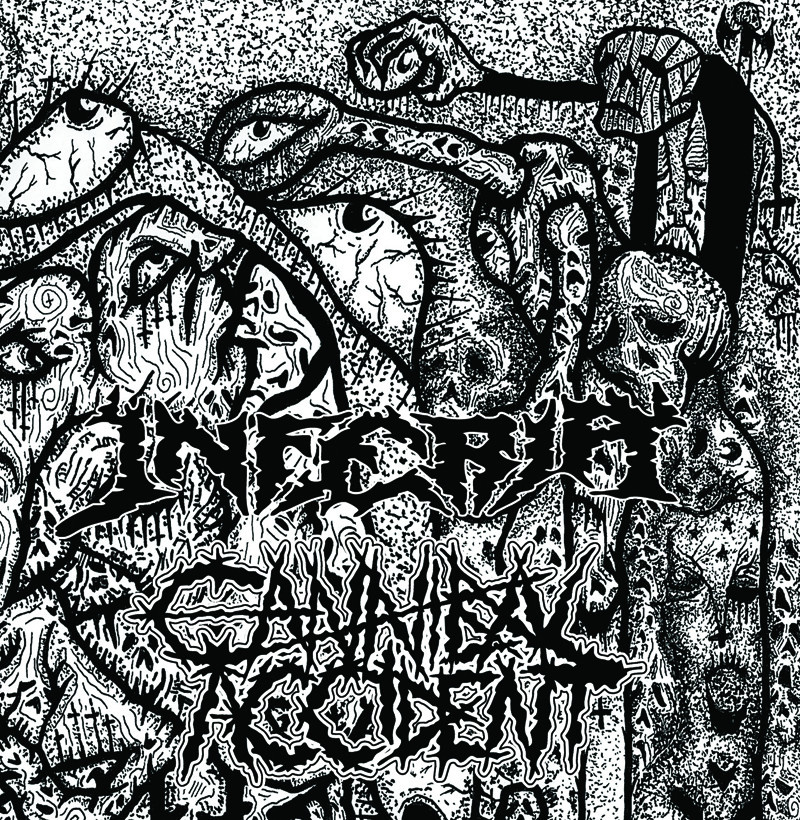 NRR: Is there a band or bands on this year’s FTA line-up that you are looking forward to seeing as fans?
Jani Hude Huttunen: Many good bands this year and we are very happy to be there and play too and meeting friends. Like Internal Bleeding, we been written liken first time like 25 years ago and fi-anal-ly we meet, yeah, of course Terrorizer, Obituary, Murder Construct, Eyehategod, Waco Jesus!, and Jesus Shaves! Our new song, but we don’t play that, (evil smiles). On every stage there are good bands! Great festival! And we are looking toward to coming there! See this mighty open air festival and we are more than happy to come.
NRR: You guys are one of the more established bands playing FTA this year. Is the merch table as important to you now as say the early 90s when you were first starting out?
Jani Hude Huttunen: Huh, really, merch, whatÂ´s that?, (laughing). The scene has changed since early 90s. It is important to sell merch and we only have a CD left, no t-shirts anymore. We hope that people find us and will support us anyway.
NRR: Are there major differences between the metal scene in Finland and the rest of the world or even just here in the States?
Jani Hude Huttunen: As I said before, we did a big tour in South America in 2014, there was a lot of awesome people. We met old fans and got to meet new ones too. We played there also in 2011 and there was people who were waiting for us and our tour there. In Finland we have good bands there. In my opinion, we have good grind, death, black metal acts and good festivals with people coming to weekend shows. In Las Vegas there was a very good time to meet people that like us and when we played in Los Angeles. People should not forget metal and it seems like good!
NRR: In the many years Inferia has been around, what might be the most bizarre, strange, or simply hilarious experience that comes to mind? A Spinal Tap moment if you will?

Jani Hude Huttunen: Yeah, balls nailed to the kitchen table, Nosferatu we are! It has been to me a long time and playing many different line ups.
We don’t take this too seriously, we just don’t risk it, we fist it, and I never change a day off my life. This is what I wanna do and we wanna do. This is the Cockalypse Experience and Inferia is now grindier, faster, and better than in years. We are ready. We are cumming.
Well, we have many stories and I’ll tell you one in a simply way. There was a lot of vodka after a show and we drank a lot of it. Well our guitar player goes to sleep because he was so drunk, but he went to the wrong room of the hotel. So, in the morning we are all looking for him. “Where is our guitar player because we have to go next country?” So we wait a long time and then our guitar player woke up and found us. It was was too late, so we miss that gig. Sorry, (laughing).
The Spinal Tap movie is best, (laughing), what you think about Anvil! The Story of Anvil movie?