On the Heartache & Hilarity tour fans will be given the opportunity to hear many songs from Jaret’s two decades as the frontman of pop punk favourites Bowling For Soup, plus the possibilities of songs from his other projects such as People On Vacation and Jarinus. 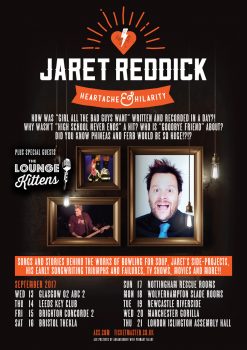 There’ll also be plenty of time for storytelling, as Jaret lifts the lid on the stories behind some of the most successful songs of his career (and some of the deep cuts too). Not to mention the opportunities for Jaret to cover some of the other aspects of his life such as doing voice over work for Disney and running his own wildly successful podcast (Jaret Goes To The Movies). The nine dates across the UK where you can catch Jaret’s Heartache & Hilarity tour can be found below:

Jaret will be joined by the wonderfully entertaining rock and metal lounge cover singing trio The Lounge Kittens on all dates. Tickets for the tour are available now from AXS.com, Seetickets and Ticketmaster.co.uk.

Some of Jaret’s long term fans may now decide to take the opportunity to preserve this tour, and their “BFS fandom” forever in ink form. Bowling For Soup’s long time tattooist in the UK, Old Sarum Tattoo, is offering fans the chance to get a kick ass pop punk or bowling for soup tattoo before some of the shows. This once in a lifetime chance will be available in Newcastle, Wolverhampton, Manchester and London. 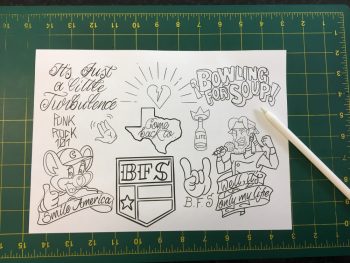 Here’s the word from Darren at Old Sarum Tattoo:

“We’re working on a bunch of cool designs for you and prices range from £40 – £140 but spaces are VERY LIMITED!!! If you want make a permanent memory of an AWESOME night message Darren at Old Sarum Tattoo to grab your spot!”

As well as Jaret Reddick’s acoustic storytelling tour, Bowling For Soup have recently released another track from the live acoustic DVD/CD, Jaret explains why Turbulence is such an important song in the history of Bowling For Soup:

“Turbulence is one of those special songs that goes through life with me. The “bumps in the road” are different, depending on the roads…but I always have this one to come back to remind me that life is awesome…even the fart joke guy needs a boost from time to time.”

Anyone who would like to pick up a copy of Acoustic In A Freakin’ English Church can do so from Amazon, with both the DVD version and CD versions available.