Dirt Fest is once again in a state of suspended animation. We go over one last time, the spiteful dreams of a resting, metal juggernaut.

When the fans look back at the behemoth that was Dirt Fest 2015, we hope they look back at it as fondly as all of us at National Rock Review happen to. We would like to thank all of the sponsors and all of the bands that played all four stages over the length of the festival. So please, let the US Army, Lasco Ford, Arnar Clothing, Black Forest Brew Haus and Grill, Banana 101.5 FM, Omega Enclosures, InkAddict, Electric Chair Tattoo, Red Bull, National Rock Review, and anyone else not listed here know you appreciated them as much as we did for helping make this year’s show such a wonderful event.

Photo above: Down, taken by Chuck Marshall from the main stage with the crowd in the background. 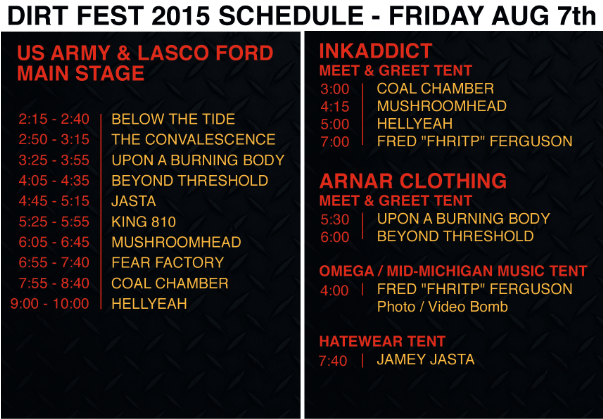 At the start of a concert, you can only hope that when it’s an outdoor show, the weather gods are music fans. The day started off perfectly for a festival and managed to hold off on the rain until the Friday line-up had finished up for the night. The US Army and Lasco Ford stage had the privilege of being the only place to focus on for music. A total of ten bands would play the main stage and each band was either intriguing, energizing, mesmerizing, or a small mix of all of the above.

The first three bands to have the pleasure of playing were Below The TideÂ (BTT), The Convalescence, and Upon A Burning Body (UABB). BTT had quite a bit of crowd support for having the early slot on the billing. The energy was fantastic and when the band comes close, we’ll definitely be giving them a closer look while they’re out on tour. The Convalescence had been on tour for over a 100 days straight, had crippling bus problems, and were close to heading home for some well-needed rest. None of this stopped the spectacle that they put on from the music itself to the stage show that went along with it. In their trademark make-up with hair flailing around, the band gives everything they had in the two spot. UABB played their crowd favorites ending with the collaboration song with Ice-T, “Turn Down For What.” Even ending their set about fifteen to twenty minutes early didn’t dampen the crowd’s thirst for more great music.

The next three bands to follow happened to be Beyond Threshold, King 810, and Jasta. Beyond Threshold took up the crowd after the early departure of UABB and had a great set full of energy and movement. Some of the dance moves were really quite special by Erik Virgin.Â Even though Jasta hasn’t been in the forefront of Jamey’s plans of late, he brought the band out for support of Coal Chamber and Fear Factory. The set was loud, fun, and full of good music from the boys. From his own birthday announcement, to the juicy tidbit of new Hatebreed coming, and finishing his set with “I Will Be Heard,” it was truly an early highlight of the whole Dirt Fest 2015 campaign.

The bad boys out of Lansing came next. Like them or hate them, King 810’s set was anything but boring. Starting off with a smoke grenade, having “armed” soldiers to open the set, and ending it with the merciless beating of a keyboard, the show was one to remember. When your last words on stage have to deal with your cousin being arrested backstage, that’s metal.

With the clock-like efficiency from the stage and sound crews, the next three big boy bands came up right on time. Mushroomhead is a band that needs no introduction. The boys from Cleveland came armed with their signature water drums, masks, hits, and even a surprise cameo from Jackie LaPonza of UnSaid Fate. Next up was a much anticipated performance from Fear Factory. Not only were they playing in support of the latest album, Genexus, but the guys managed to hit songs from all of the records in their catalog. Much respect goes out to the guys when members of other bands were singing songs word for word with Burton C. Bell from side stage.

With only one more band before the first-day closers, Coal Chamber came out with everything they had to make sure the crowd was ready. Dez Fafara came out like a mad bull with vigor and trademark nose ring and never really let the crowd catch their breath. Even admonishing a couple of poor photographers into the deeper part of their set didn’t slow things down. Touring in support of their new album, Rivals, as well the Dirt Fest faithful were treated to older favorites and a few new tunes as well. Mixed with a sweet stage setup, Mikey’s insane drumming, the great play of Nadja with hair uncontrollable, and Meegs’ mesmerizing axe play the entire time they were on stage was a true treat to see in person.

With the light fading over the Birch Run Expo Center, there was only one band left for Friday night and the crowd was more than ready and primed for Hellyeah. Coming on stage right at nine o’clock the guys made the most of their hour in front of the rabid fans. Starting with the wave from Vinny to Chad’s signature jumps, the horses of Hellyeah spirited out of the gates and never slowed down. They played the biggest hits, came out into the crowd, spit blood, and rocked the people of Dirt Fest to their very souls. While many had wished to see Down and Hellyeah on the same night for a possible reconciliation, at the end of this night, people were simply blown away by what they witnessed from just one of them.

The rain mainly stayed away from Dirt Fest 2015 on Saturday as day two cranked up into high gear with four stages going all out with hard rock and metal music. Along with vendors, band meet and greets, and plenty of food and beer, an experience of festival proportions had awoken.

The Arnar Clothing stage and Black Forest Brew Haus and Grill stages featured some top notch bands including Hell Rides North, Cadre, Vicariant, Saint Ridley, Reign, and Harlow. These bands were diverse and drew many folks over to check out their music. You could easily see these bands moving up to the bigger stages at future festivals. Highlights included the virtuoso progressive metal of Reign, the animated stage show of Vicariant with guitarist Matt Gilson bouncing around in the crowd, and Cadre vocalist Johhny Mascioli swinging from the front of the stage rigging.

The National Rock Review stage had an outstanding array of talent. Kaleido was off the hook with a lively show that showcased the bandâ€™s hard hitting music. Red Sun Rising was impressive with their compelling hard rock sound. Critical Bill won the award for best crowd participation by having a bevy of adorable ladies from the audience join them on stage for their final song. There was no pretense, just great hard rock from Eyes Set To Kill. The stand-out event for Day Two was easily the set of manic music generated by Child Bite. They have been on tour with Down and their performance was hair-raising and intense.

The US Army and Lasco Ford stage gave the fans nearly nonstop action from a host of talented bands during Day Two of Dirt Fest 2015. Michiganâ€™s Beast In The Field got things moving with their thunderous sonic treasure. It Lies Within drew a huge crowd to start the day off on the US Army and Lasco Ford Stage. Their legions of fans grooved with every breakdown. The set by Murder FM was inspiring in that they got their fans involved and really played for the audience. The theatrics of Blue Felix combined with massive metal grooves were a big hit.

The evening got even better with the hard rocking of We Are Harlot on the US Army and Lasco Ford stage followed by the hilarious antics of Psychostick. This was Psychostickâ€™s fifth Dirt Fest appearance and their 1,000th show. There was a distinct note of herbal essences during the performance by the Kottonmouth Kings. With their first appearance in two years, Taproot showed they are still in charge with a break neck set of music. Vocalist Stephen Richards even got into the pit to mix it up with the fans.

Dirt Fest 2015 began closing down with Pop Evil. The band unleashed rocking set of music dedicated to their Michigan fans who have faithfully followed the band since their inception in 2001. They played with passion and a real love of music.

The night came to a climatic end on the US Army stage with an epic performance by Down. These guys came to throw down and the crowd matched every bit of the intensity. With monster riffs and stellar leads from Bobby Landgraf and Pepper Keenan, whiplash bass playing by Pat Bruders, pulverizing drums by Jimmy Bower, and the vocals from Hell of Phil Anselmo, their set delivered pounding waves of heavy metal infused with a straight-up no bullshit attitude.

We’d love to see the photos and hear the stories of you wonderful metal fans that came out to support the festival. Find National Rock Review on Facebook and let us know about them!