The biggest names in rock and country release the single “Blue On Black” today. All proceeds from the song to benefit The Gary Sinise Foundation.

The multi-platinum rock group Five Finger Death Punch has teamed up with the legendary Brian May of Queen and two of the biggest names in country and blues rock, Brantley Gilbert and Kenny Wayne Shepherd to record a special version of the song “Blue On Black” mixed by Kevin Churko (Ozzy Osbourne, Shania Twain, Disturbed). Titans in each of their respective genres, the artists came together to merge country and mainstream rock to re-create the classic song originally recorded and co-written by Shepherd. Taking Country Rock to the next level, “Blue On Black” is out today worldwide via Prospect Park (North America) and Eleven Seven Music (ex. North America). The song is available here. The artists also premiered an official music video, showing the creation of the song.

The artists and their respective labels are donating all proceeds from the collaboration version of “Blue On Black” to the Gary Sinise Foundation which honors America’s defenders, veterans, first responders, their families and those in need.

Five Finger Death Punch guitarist Zoltan Bathory states: “To raise awareness for and support First Responders is a cause that’s always been close to our hearts. These brave men and women leave their homes every morning not knowing if they’ll ever see their families again. Yet they make a conscious choice to do so for the greater good. What better way to make a difference than to join forces with some of our friends in country, blues and classic rock who happen to be some of the biggest names in those genres and together celebrate these heroes.”

“Blue on Black is a song my band and I have covered off and on for years… songs are certified timeless when you can come back to them,” says Brantley Gilbert. “It’s always a staple each night and one of my favorite songs to perform. When the opportunity came up to sing on Five Finger’s version, with both Kenny Wayne and Brian May of Queen, I jumped at the chance… Who wouldn’t?! It incorporates so many different musical perspectives, but our collaboration just works brilliantly.”

Gary Sinise, the Golden Globe and Emmy Award winning actor and Founder of the Gary Sinise Foundation expresses his gratitude to the artists saying: “I want to send my thanks to Five Finger Death Punch, Brian May of Queen, Brantley Gilbert and Kenny Wayne Shepherd for their support of The Gary Sinise Foundation and our efforts to give back to our Nation’s First Responders. I’m so grateful to have all of these incredible artists from different genres coming together to support our mission with this great song, ‘Blue On Black’. I believe while we can never do enough to show our appreciation and gratitude to our Nation’s defenders and the families who sacrifice right alongside them we can always do a little more. And you all are doing just that. So I salute you, and I thank you all. God bless.”

Blues rock legend Kenny Wayne Shepherd adds: “When Five Finger Death Punch approached me about teaming up with them to do a special version of ‘Blue On Black’, I was thrilled to do it. When they told me Brantley Gilbert and Brian May were also going to be part of it, I was honored. This is a powerful collaboration of rock, country and blues artists and a true testament to the commonalities these musical styles share, and I think the fans will appreciate and enjoy it as much as we do.”

Allen Kovac, CEO of Eleven Seven Label Group, Tenth Street Entertainment and Five Finger Death Punch’s manager for close to a decade adds: “From Johnny Cash’s ‘I Walk The Line’ and The Rolling Stones’ ‘Honky Tonk Woman’ to The Eagles and Willie Nelson, country and rock have shared an audience, and created some of the biggest and most successful records of all time. It’s time to bring it all back again for First Responders. Let’s tear down the walls!”

“We are proud of our nearly 12-year legacy with Five Finger Death Punch,” adds John Bowen, General Manager of Prospect Park, the band’s North American label. “We are excited to release a single that will open new eyes and ears to what we believe is an incredible song, interpreted with phenomenal skill by all of the artists involved. We are also proud of the conscientious nature of this release, in support of the Gary Sinise Foundation. Rock is dead? We don’t think so.” 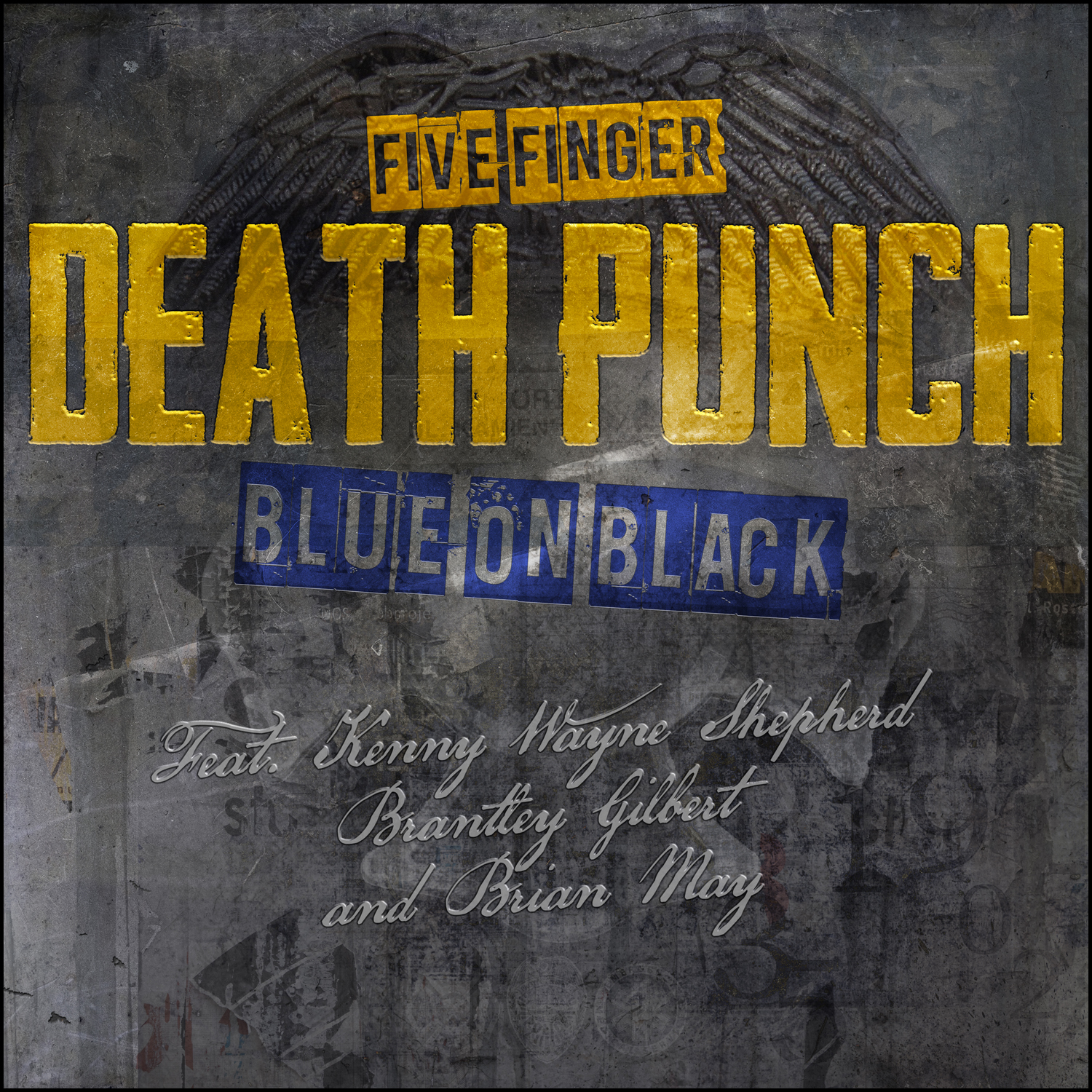 Big Machine Label Group — home of country superstar Brantley Gilbert and one of the biggest labels in country music — is also fully supportive of the country-rock single. Founder and CEO Scott Borchetta offers: “Maybe you didn’t see this coming… or maybe you did… Two American super-powers come together to create a megaton track that will have both the Brantley Gilbert Nation & Five Finger Death Punch Fans screaming for more. Unleash the beast.”

Brian May loved the song “Blue On Black” and set up a special recording session and video shoot to be featured on it all in between his work as a producer and executive music producer with Roger Taylor of the Queen biography film Bohemian Rhapsody. Brian and Roger are responsible for one of the highest grossing films of all time ($900,000,000+) across the world and the winner of Oscar, BAFTA and Golden Globe Awards. Brian May will perform with Queen + Adam Lambert throughout 2019 and 2020.

Additionally, Five Finger Death Punch’s original cover version of “Blue On Black” has already generated over 50 million on-demand streams in the U.S., and is one of the most-consumed songs on the band’s current album (averaging over 1 million U.S. streams per week). The song features distorted guitars, pummeling percussion and a swaggering chant that marks a surprising outlier on Five Finger Death Punch’s current and seventh studio album, And Justice For None. In the U.S. alone, the band have sold 4.5 million albums, 10 million digital songs and over 3 billion streams total. 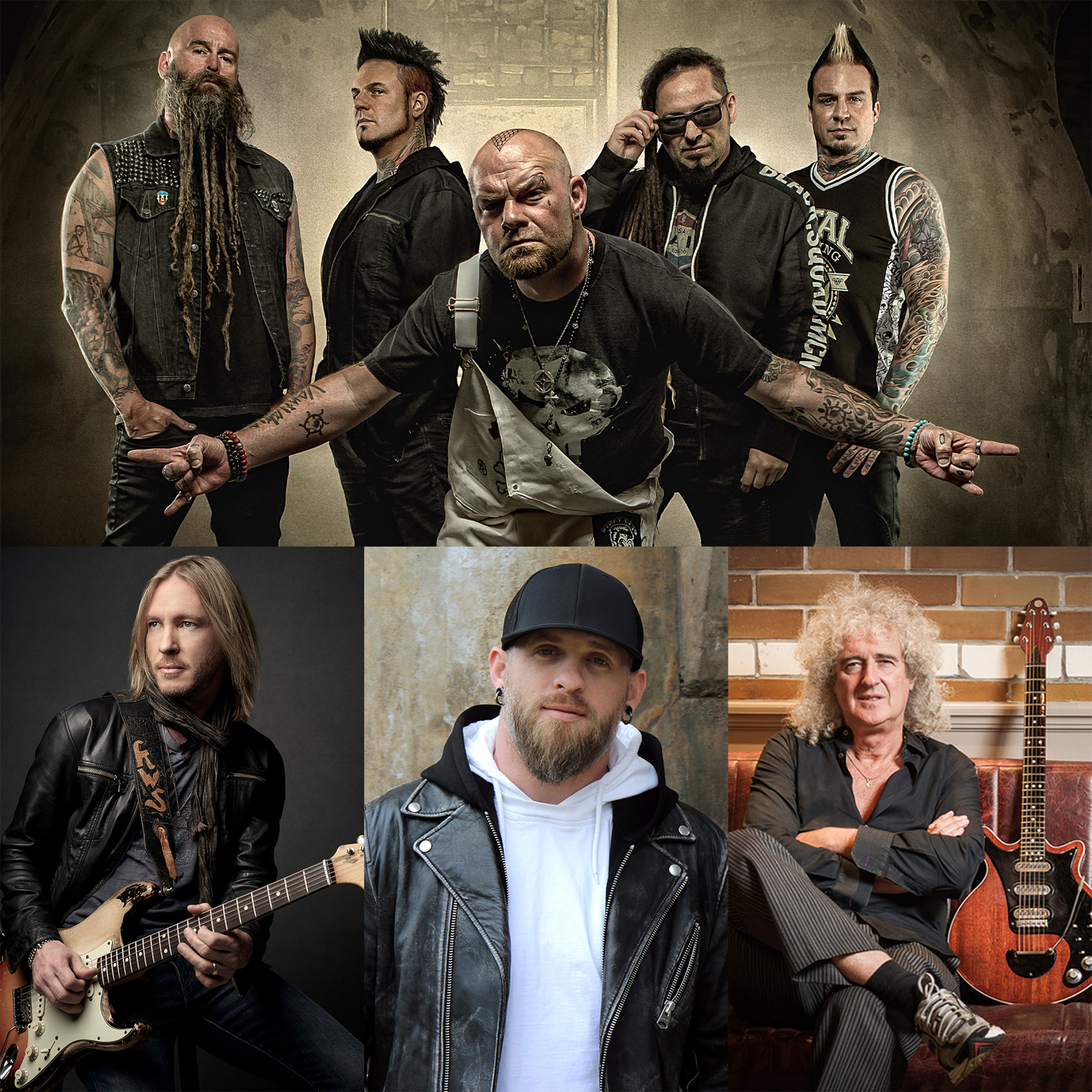