We were proud to cover the great benefit show known as Rockers Against Trafficking, and were fortunate to speak with the ‘First Lady of Metal’, Ann Boleyn. The exclusive interview includes Ann and some of the new members of her band, Hellion, as they were preparing to take the stage in support of this great cause.

The Rockers Against Trafficking organization was created by veteran rock photographer Kevin Estrada to raise awareness of human trafficking. It was great to see so many legendary musicians coming together to support this cause.  The all-star benefit show was held at Paladinos in Tarzana, CA on April 11th, 2014 and included performances from members of Helmet, Megadeth, Stone Temple Pilots, Fear Factory, Slayer, Ministry, Armored Saint, Quit Riot, Rik Fox and Ann Boleyn with Hellion.

With two young girls of his own, Estrada says that human trafficking has been on his radar as he hears about more young girls, the same age as his own daughters, falling victim to this tragedy every day. He goes on to add that human trafficking is the second largest criminal industry in the world today, second to drug activity and is happening to nearly two million girls worldwide with some of these girls as young as 7 years old. One of the hotspots is right here in Los Angeles as well as San Francisco and San Diego. The proceeds from the show will help to re-build the lives of these young victims with housing, medical assistance, legal aid and job placement. The donations will also be used to set up monitoring stations between countries known for human trafficking. 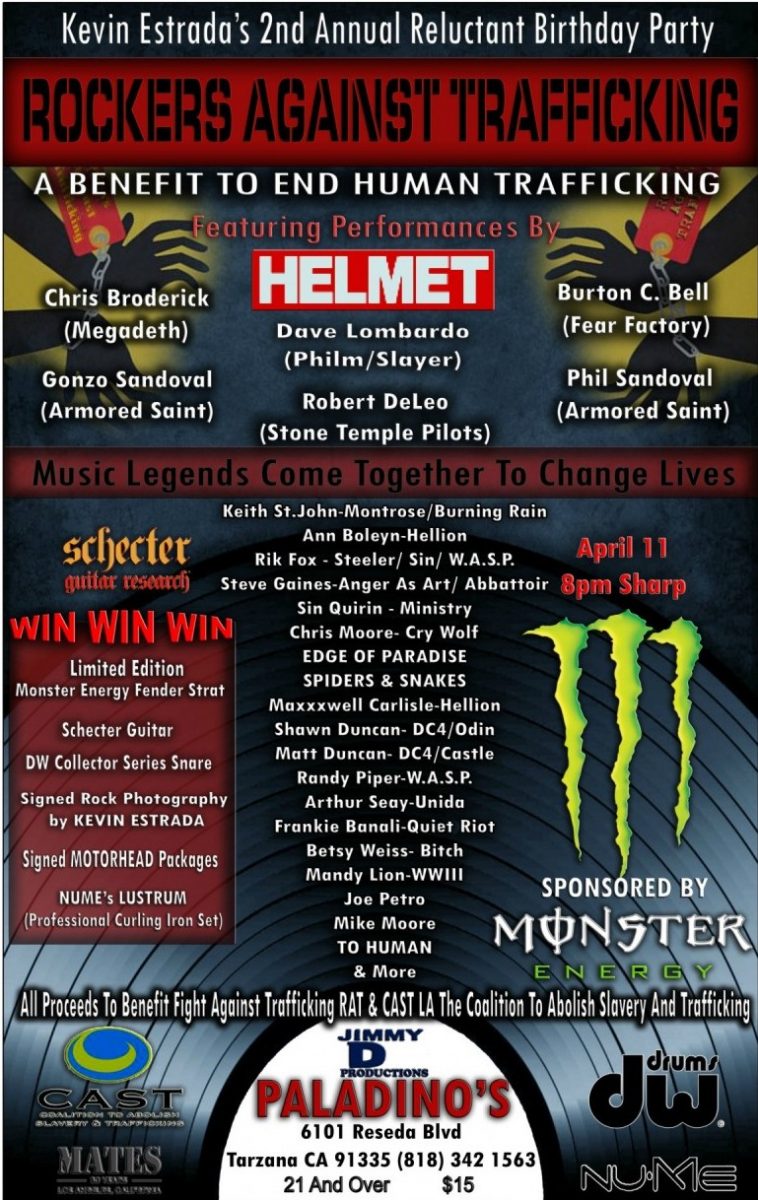 The evening included incredible performances by all the musicians as well as the true stories by parents of actual victims that reminded us of the reality and horror and the reason we were all here supporting this great cause.

Hellion tore up the stage with their unrelenting energy and made it clear to everyone that the name of their new To Hellion And Back 2xCD anthology collection is the perfect name, because they have indeed returned.  This amazing collection chronicles the bandâ€™s beginnings from 1982 to the present and features new music from them.

Ann talked to us about being involved with this great benefit. She also told us how difficult it was to select a collection of songs for To Hellion And Back when there is so much history. She also tells us about the two songs on the collection that were produced by Ronnie James Dio.

Check out the Live Video Interview with Ann Boleyn with Hellion, and the pictures from this great benefit show.