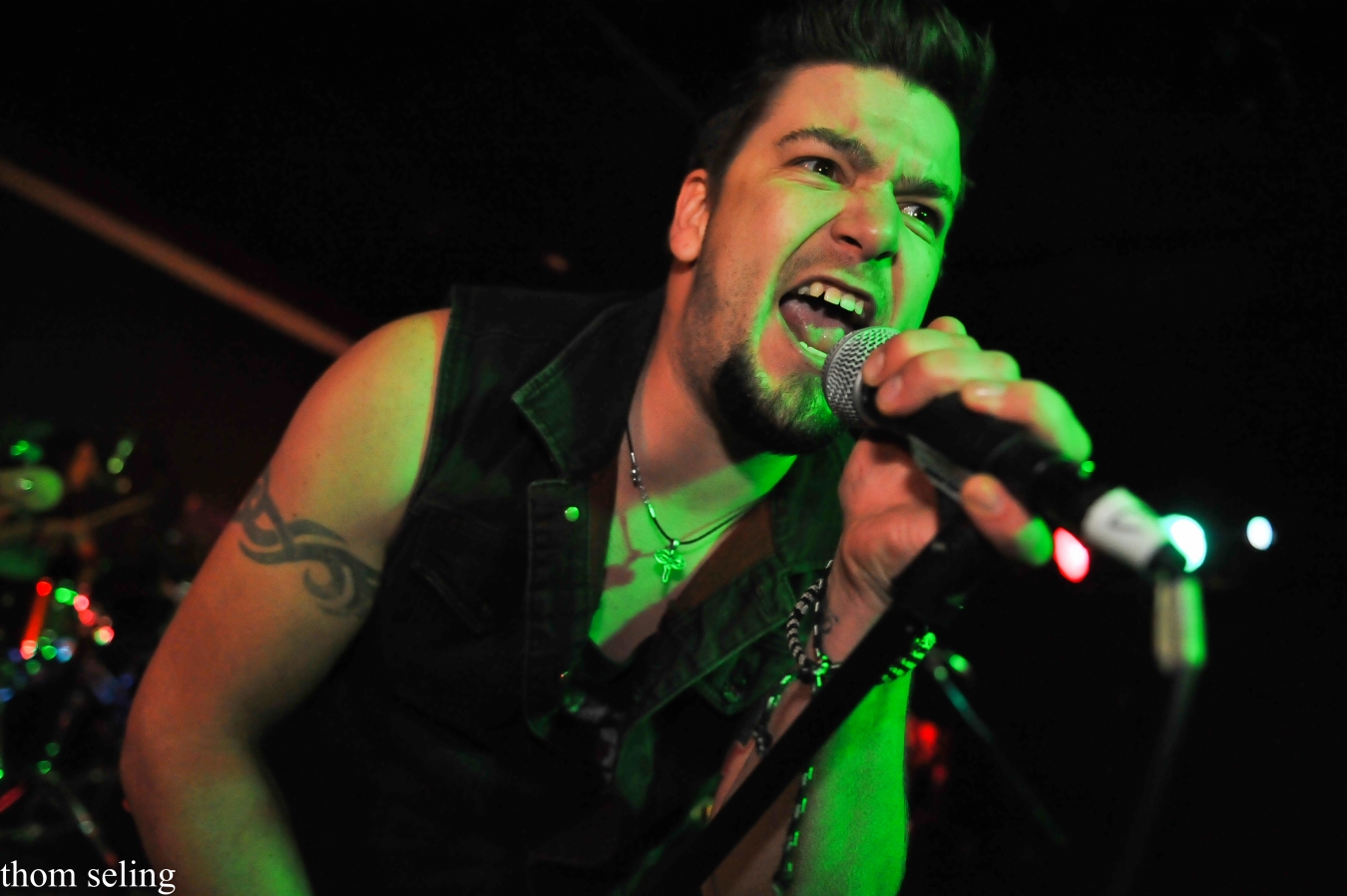 On a cold night in Taylor, Michigan, the Red Light Saints rolled into town and heated things up with their blistering live show. On April 15th, 2014, these guys put on an outstanding in-your-face rock â€˜n roll show at the Perfect Pitcher. The band played their hearts out to the 150+ crowd gaining a slew of new fans along the way!

The band unleashed a dynamic set of high energy rock â€˜n roll with a set that intermixed songs from their debut EP, The Legend of Jasper Pipestone, with a few unreleased songs and an incredible rendition of Man In The Box by Alice In Chains.

Their setlist included: On The Pavement, Let It Go, Ur Not The One, The Plan, Long Way Home, Dag Bag, Long Night, Man In The Box, Anything Anymore, and Say What You Will.

Schinke took no time introducing himself to the crowd while belting out â€œItâ€™s Nice To Meet Youâ€ with On The Pavement. Schinke is a very energetic frontman who appears to truly love what he is doing. Backed by heavy instrumentals and mammoth drumming, this was the perfect song for them to open up their set with.

Heckel shined during The Plan showing that he is an amazing drummer who has the capability to play alongside seasoned drummers who have been in the business twice as long as him.

The band seemed to really find their â€˜grooveâ€™ during Long Way Home (a personal favorite of mine). Bashaw and Opperman played off each other during this song. Opperman was all â€˜smilesâ€™ and would engage with the audience when he caught them singing along to the chorus.

During Dag Bag, both Nader and Bashaw, smiling and laughing, appeared to have fun playing their guitars while leaning on each other during this song. It was as if they were both trying to support holding each other up.

The guys were â€˜spot-onâ€™ with their rendition of Man In The Box. This was an excellent choice for them as a cover song. They played with the same power and passion that Alice In Chains put into the original version making it a highlight for many who were in attendance.

They ended their set with their recently released single, Say What You Will. This song has a â€˜punchâ€™ to it. It is a great song for them to release as a single. With its overall aggressive vibe, it makes a statement to the listener as if saying to them, â€œHere We Are!â€

There was a small crowd up front when the band started their set but most everyone had made their way up to the stage as the area was full to capacity by the end of their set. Red Light Saints found new group of fans this night here in Taylor, Michigan. The band came back, later in the night, to play with Faster Pussycat on the song Pretty Fucked Up. The crowd absolutely LOVED it! Together, these two bands had hit a home run.

After having recently reviewed The Legend Of Jasper Pipestone EP, and really enjoying it, I was looking forward to checking out their live show. These guys did not disappoint me in the least, and made it worth the two-hour drive it took to see them. Red Light Saints play like seasoned musicians and appear to be in it for the long haul. After watching their performance, I see them only getting bigger and bigger. I am definitely looking forward to seeing them on their next tour.

After the show, I had the honor of sitting down with the guys to ask them a few questions. Here is that interview: 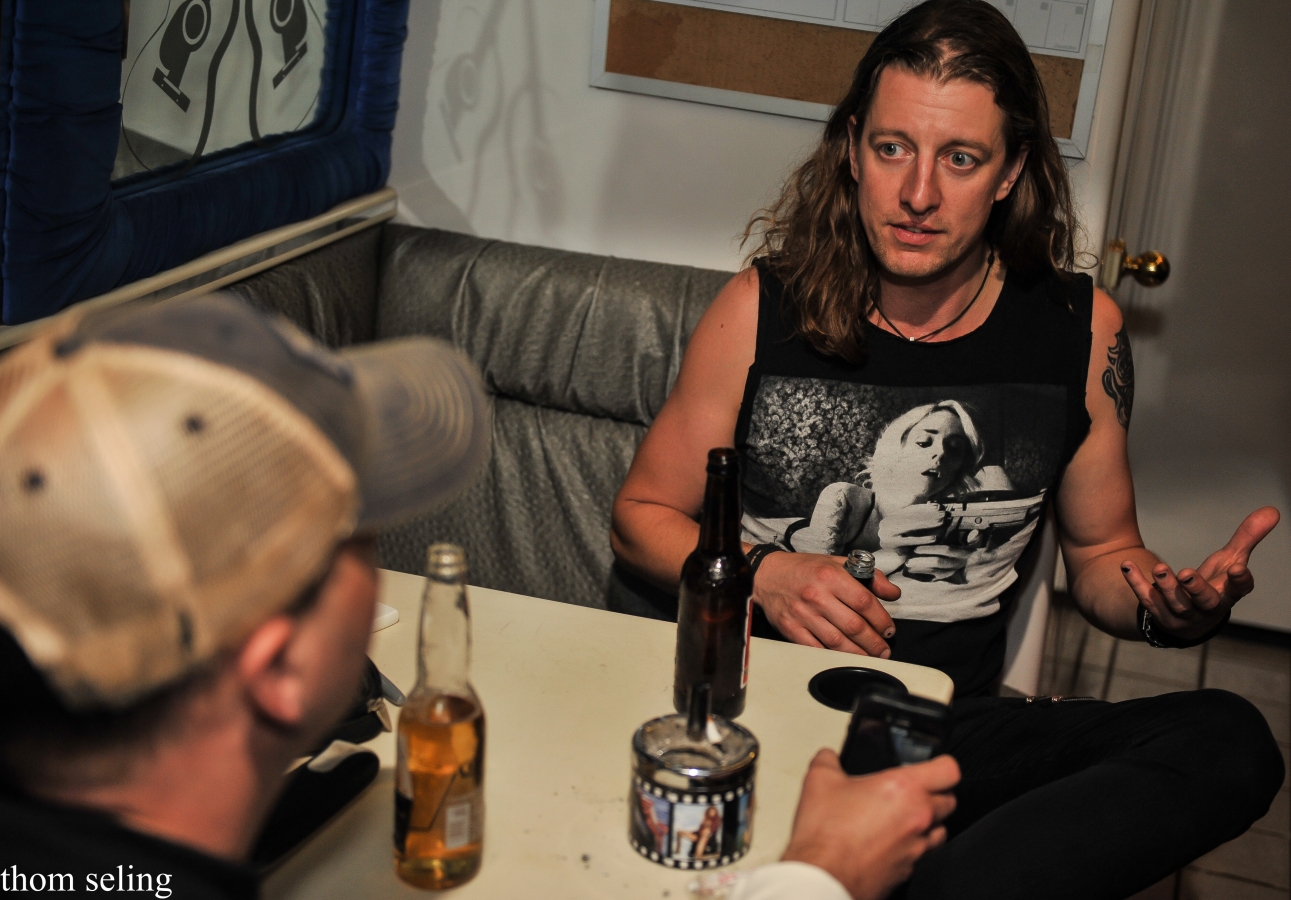 At that point, before the first tour, we had done some Midwest runs but we had never done anything that was a full-fledged national tour. So, we did it and, honestly, when you have 13 people on a bus for 6 weeks at a time, you either love each other or you hate each other or maybe a little bit of both. They (Faster Pussycat) became, well their not even friends at this pointâ€¦ their family. We had Thanksgiving at a couple of their houses with their families.

When it came time for us to tour again, we had our publicist put some feelers out for us and Faster Pussycat said “come out with us?” We said “hell yes”, again, because we seriously love these guys like family. We know that their audience isn’t necessarily 100% our demographic or listening to new modern active rock radio but we had so much fun with them the first tour that there was no way we could say no. So that’s how we ended up on this tour. It’s a way for us to get out nationally and hitting some of the same venues again, or at least hitting some of the same markets again, and just getting our name out there so we can hopefully get a little name recognition for the next time we come back through.

This tour also really helped us spring-board some of the stuff that we needed to do such as playing some show cases for labels as well as some media, like rock publications or blog writers. It got us out there, to put our show out there to get people, like you, to review it and tell people about what we’re doing. Because, us, we believe in what we’re doing.

LANE: And it seems like a few other people do too with the reviews that we are getting and the really good response from them.
LUKE: I’m really proud of the response we are getting from people who aren’t necessarily there to see us or who aren’t even really into the new modern rock sound.
TRAVIS: My favorite thing is when people who don’t know who the fuck we are see us for the first time. Their standing there in the back then halfway through the show their saying “who the fuck are these assholes?” and then their scurrying up toward the stage and then we’re all friends and we have drinks with them.
LUKE: That’s true. You might think that this isn’t necessarily the right crowd for us to play to but we have made so many genuine friends on these two tours that we will know these people for as long as Red Light Saints is around.
TRAVIS: But, what’s the right crowd? People are people everywhere. I like all kinds of genres of music. I like country and pop and all kinds of crazy music. People are going to like us or they’re not going to like us.
LUKE: In all sincerity we are just playing rock ‘n roll and if people are liking Faster Pussycat’s brand of rock ‘n roll then we hope they will like ours as well.
LANE: I have to share the best thing that has happened to me on this tour. A few nights ago there was this 12 or 13 year old boy there with his father because his father obviously grew up listening to Faster Pussycat. Here this father brings his kid with him to his first concert and the kid loved us. He came back to our booth at least ten times to hang out. That took me back to when I was a kid just getting into music and going to my first concert. And, believe it or not, those early bands that I listened to I still love now. Hopefully this kid will love our music years from now.
TRAVIS: Yeah, this kid’s father put a post on our Facebook wall and it really meant a lot to me. It is something I will never forget. This is from Raymond. This is from Ohio. He said, “I was at the show with my sons. It was the first concert for my 15 year old. You guys rocked us. Kick ass show. We got you to play one more and you didn’t disappoint us one bit. You guys are going places. We love the CD and thanks for signing it for the boys. You guys are all class acts on and off the stage.”

That last sentence really got to me because we’re all good old boys from Wisconsin. We play for the hard working families. We’re all hard working guys. We all have jobs at home. The best thing about all of my favorite musicians is that you can talk to them. And that’s me. I want to be that guy that you can come up to and talk to. This is the kind of stuff that I live for. Dave Grohl is my favorite musician. I want people to think of me as they do of Dave. He is the nicest guy in rock ‘n roll making him the coolest guy in rock ‘n roll.

We kind of found Nader the same way. We had to play a gig. We needed a bassist. Our singer, at the time, said I know a guy. And, so we called him and said, hey, can you play a show on Friday? And, he said yes. We probably jammed with him for about an hour before the show then played this three hour show with him. So, an hour of the show he kind of â€˜knew’ but then we just winged it for the other two hours. When we got done playing, Lane was like, what do you think of Nader? And, I was like, He’s in the band. I want him. I want him, now! As a drummer, I am really particular about the bassist and then the bassist is probably the same way about the drummer and we just clicked immediately.

For me, growing up, Live was and still is my favorite band and Ed is my favorite front man, ever, so I fell on the floor then freaked out then passed out then said yes! We had six days to take the show that you just saw, and figure out how to make it an acoustic one. We were going to be playing a few shows with Ed that would literally be sit down shows at dinner theatres and wineries.

LANE: There was the Meyer Theatre, the City Winery in Chicago, and the Dakota Jazz Club in Minneapolis.
LUKE: The first show was the Meyer Theatre. We spent six days trying to figure out how to take our set, which is very rock n roll, very high energy jumping off of bass drums, or whatever, and make it acoustic. Make it classy. So, we re-worked it and we did it. We didn’t really know what to expect but the response was overwhelmingly positive. And, then Ed invited us to join him on a few other shows. That’s kind of the thing that kick started us on deciding to make the jump to tour nationally.
NRR: So here you are, then, taking it one day at a time, trying to take your career to the next level?
TRAVIS: Exactly.
NRR: Well guys, thanks for your time. It was an honor speaking with you.
TRAVIS: Thank you man, for coming to the show and for everything else.