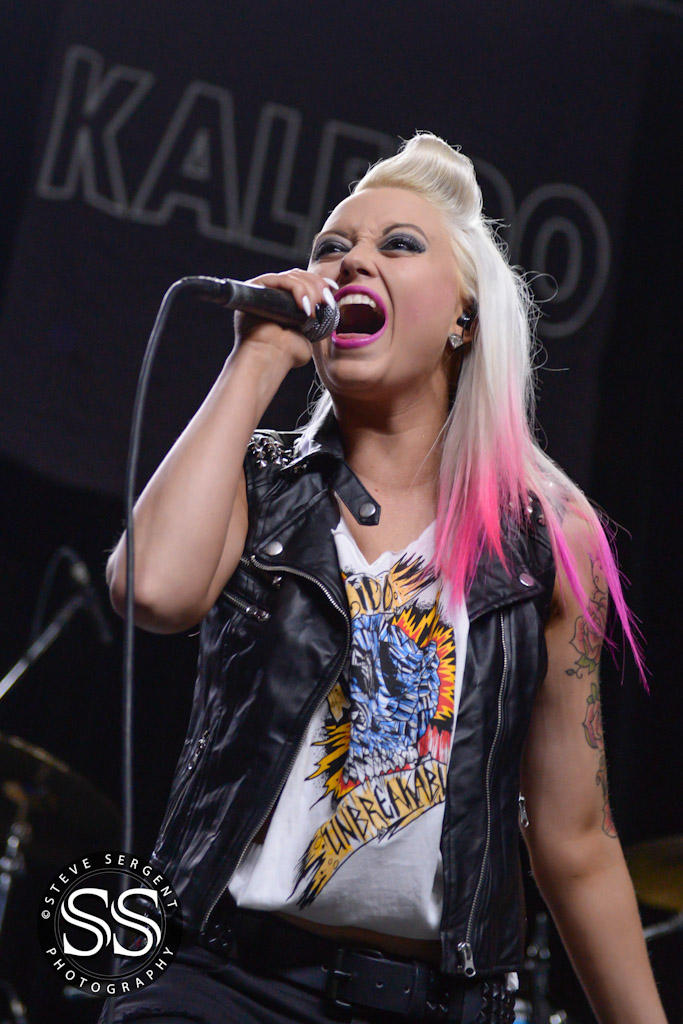 If you follow Detroit music, there’s no doubt you’ve heard the phrase “Ain’t no party like a Detroit Party”. But if you were at the Kaleido show on Saturday, you got to experience one. Kaleido revealed their new record, Unbreakable, to a packed house at the Majestic Theatre in Detroit.

The show featured a mix of Detroit talent featuring DJ Godfather (who is a legend in Detroit), Reverse Order, Half Light Music, and Flint Eastwood. They warmed up the crowd and provided just the right mix to have everyone ready to rock and dance for Kaleido.

Christina Chriss fronts the band and brings a stage presence that’s unmatched here in Detroit.  Her beautiful personality of part girl next door, part bitch next door, forms the perfect combination for one energetic show.

Their set started with the title track to the new record, Unbreakable, quickly transitioning into the always popular, Chasing Stars, and Open Your Eyes off of their first record. Open your eyes was the ‘Peoples choice champ’ eleven nights in a row on local Detroit rock station 89X beating out big name acts Blink 182, Muse, and Jack White.  That’s about all it took for the crowd to be immersed into the show, dancing and singing along with every single song right into Gimme Your Love, which features the perfect mix of pop and rock to dance to.

Just before a moment allowing guitarists Jamie Allen Burnham and Ronnie Rosolino to showcase their shredding skills, the band unleashed a breathtaking cover of My Michelle from Gun’s N Roses, whom the band is heavily influenced by. The guitar solos led into one of their heavier songs off the new record, Anything For You.The show then toned down a bit as Christina showed off her full range of vocal abilities with the song Under the Covers, a song surely to eventually have lighters ( well cell phones these days) waving through the air at future shows.

Drummer Joey Fava next took over the show with a well deserving drum solo which fit the big stage perfectly. Situated high above the crowd, he went into a zone of his own with bassist Cody Morals scratching in some DJ mixes. The solo led perfectly into My Rock and Roll, which surely could hold its own against any hard rock song these days.

Watch Me Walk Away was next and unless you live under a rock in Detroit, you’ve heard this song recently. The first single off Unbreakable, the song has gotten airplay on 89x recently and the station received so many requests, it crashed their server! Behind the request blast surely were Kaleidos biggest fans, part of the internet group called Kaleidofam.

The band left the stage only to quickly come back thanks to the screaming crowd who were not going to let the party end.  The encore began with Goodbye (One Last Time), an emotional song for the band which brought tears to the eyes of some fans. The show concluded with Jane. This is the song where Christina, well Jane, shows off her bitch side. It also the song the crowd enjoy most and was a perfect ending to the party.

With the release of Unbreakable, the band has stepped up to the next level.  They fit in perfectly on the big stage at The Majestic and no doubt left their mark on everyone in attendance.

We will soon have a full interview with Kaleido covering their whole story from the beginning all the to their future plans.   Don’t wait though grab yourself a copy of Unbreakable on iTunes right now! itunes.apple.com/us/album/unbreakable/id844970259

Article and Photos by Steve Sergent