Howie D. from Hard Edge Radio catches up with Chuck Billy from Testament.

Howie D. from Hard Edge Radio and National Rock Review recently got the chance to chat with Testament front man, Chuck Billy. They talked about him passing 30 years in the metal scene, being acknowledged by the Smithsonian Institute, his thoughts on the current state of metal, updates on the new album, hitting the road with Slayer and Carcass, and more. He also took a few minutes to answer some fan questions.

Testament got its start back in the mid-80s and was a major part of the Bay area metal scene as it was first beginning to emerge. As with many great 80s and early 90s metal bands, Testament seems to be more popular than ever and continues to put out music that’s still faithful to the band’s roots.

A new album is currently in the works and should available later this year. They hit the road starting February 19 as direct support for Slayer’s US tour for the Repentless album. The band has also been confirmed to headline this year’s Maryland Death Fest on May 28th in Baltimore. 2016 is looking to be another great year for both Testament and their fans.

The interview with Chuck Billy from Testament:

Dark Roots Of Earth, the latest CD from Testament: 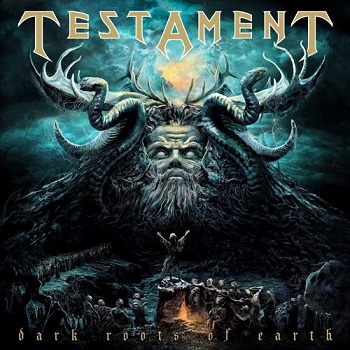