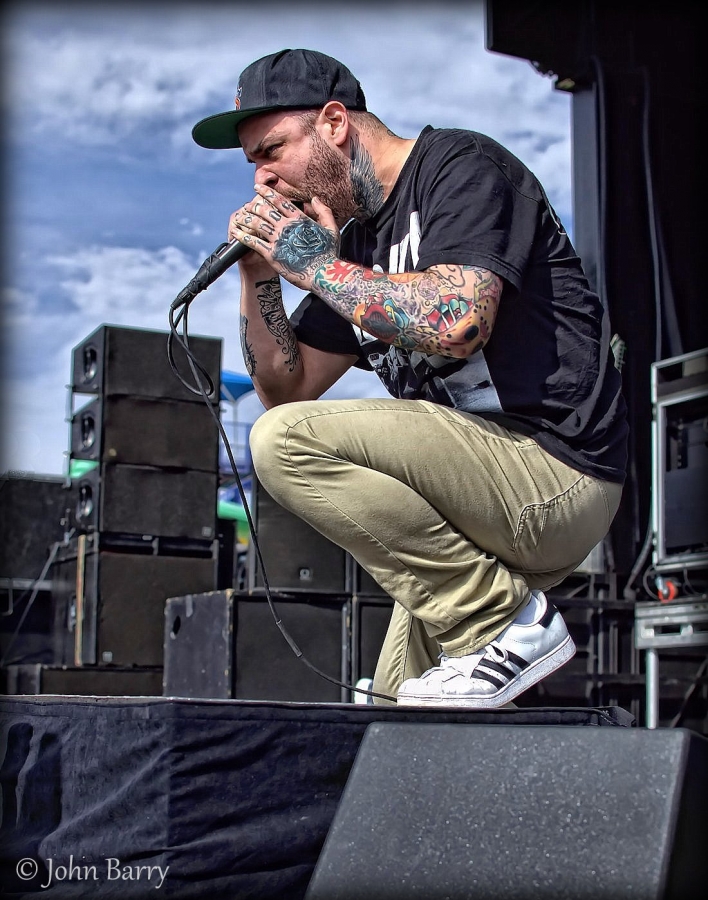 The most amazing thing that I witnessed at Extreme Thing 2014 is that rock is alive and well for the youth of America.  Hell Yes!  Itâ€™s all too easy to feel that radio, what used to be â€˜music televisionâ€™, and pop culture in general, just doesnâ€™t support rock.  Or that shows like â€˜American Idolâ€™ and â€˜The Voiceâ€™ have watered down music to the point of no return.  Not so.  Attending Extreme Thing 2014 at Desert Breeze Park in Las Vegas, Nevada has given me hope.

The same teenage angst and craving of intense, loud, emotion driven music that once spawned bands like Led Zeppelin and the Who in the 70â€™s, or Motley Crue and Metallica in the 80â€™s, lives today through Of Mice and Men, Bring Me The Horizon, and Killswitch Engage.  It isnâ€™t always music to my ears, but it does feed my soul.

The eleven-hour festival came complete with four stages and 32 bands/techno performers, a pro wrestling ring, BMX track and competition, and a skateboarding/scooter competition.  Multiple food court areas and retail booths rounded things out for a literal teenage dream.  Not the Katy Perry, bubblegum dream.  This is the Scene Dream; complete with hair in every color of the rainbow and gauges you could throw a baseball through.

Of course with bands playing continuously throughout the day it was impossible to catch every one.  I found myself drawn to the IADT stage, located on the upper field of the park.  I saw incredible sets by Sleepwave and LetLive here, but the standout performance for me was a band I had never heard of.

Tonight Alive, a five-piece out of Sydney, Australia, had a fairly early time slot, from 3:15 to 4:00.  Not a problem. They had a huge crowd.  Screaming and moshing were the activities of choice and this band extracted an intense amount of energy for a mid-afternoon crowd.

Tonight Alive has been together since 2008 and released their dÃ©but album, ‘What Are You So Scared Of?â€™ in 2011 and the follow-up â€˜The Other Sideâ€™ in September 2013.  The band features Jenna McDougall (lead vocals), Whakaio Taahi (lead guitar/backing vocals), Jake Hardy (rhythm guitar), Cam Adler (bass/backing vocals), and Matt Best (drums).  Hands down my favorite performance of the festival.

After checking out some gravity defying BMX stunts, a bit of wrestling, and a solid hour of people watching, it was time for the headline acts on the main stage.  The Hard Rock Live stage, on the lower field, brought We Gave it Hell, Volumes, Issues, Thy Art is Murder, Emmure, Of Mice & Men, Killswitch Engage, and Bring Me the Horizon.

I was most looking forward to Of Mice & Men and they did not disappoint. Raging, screaming, harmonizing, and generally blowing the crowd away, they proved unstoppable.  The fans were in a crowd surfing, mosh pit inducing frenzy, and the energy was contagious all the way to the back.  Pulling songs from all three of their studio albums, â€˜Of Mice & Menâ€™, â€˜The Floodâ€™, and 2014â€™s â€˜Restoring Forceâ€™, kept the army of fans jumping and singing along from start to finish.  As it was still daylight out, there was not a light show.  No pyro.  No video images.  Of Mice & Men killed it in the stripped down way that only a solid rock band can.  An impressive performance all around.

Killswitch Engage and Bring Me The Horizon closed out the main stage with increased intensity.  The mosh pits were bigger (â€œI want to see the circle pits that Vegas can put up!â€), the crowd was louder, and the screams were even more piercing, both on stage and in the audience.  Itâ€™s amazing the crowd had this much stamina, but the bands brought it out of them. BMTHâ€™s Oliver Sykes (lead vocals) is a powerhouse with a stage presence to match.  He commands his followers to sit cross-legged on the pavement before instructing everyone to jump up.  When Oliver speaks we listen.  The visual was inspiring.  Urging fans to â€œPut your damn cell phones down and live in the momentâ€ proved only moderately successful though. But, the guys were tight and the set was powerful.

All in all an absolute achievement as far as festivals go.  Seasoned rock fans and new rock fans alike, were treated to an entire day of music and extreme sports.  In ten hours, I didnâ€™t see one fight.  There was a strong police presence, yet I didnâ€™t witness any use of force.  The lines for food were manageable and the overall feel throughout the day was uplifting.  And the music?  The music was genuine, industrious, and not to missed.  Canâ€™t wait for Extreme Thing 2015!