After years of rumors and well over a decade of fan outcry, Slash, Axl, and Duff are finally playing together again, and it’s everything you’ve hoped for and more.

Guns N’ Roses, for the most part, are back together, and itâ€™s every bit as amazing and epic as we had all wanted.

Originally booked without a full tour to back it, GNR took to Las Vegas to usher in the opening weekend of the newly christened T-Mobile Events Center, adjacent to New York-New York and the Monte Carlo Hotel and Casino.

On a rare rainy and cold April night, things started off a bit shaky. Opening act Alice in Chains was set to go on at 9:00 pm, with doors scheduled to open at 8:00 pm. By a quarter after nine, fans were still huddled under awnings and grouped inside the parking garage, cold, wet, and confused.

Doors were still not open, and things were looking a little too familiar. Hushed whispers contemplated whether the show would go on at all.

Only hours before, news had been released that Axl had broken his foot at the â€œsecretâ€ Troubadour show in LA six days earlier. That show took place on April Fools Day, but it wasnâ€™t a joke. All reports suggested the band was in top form and sounded amazing. But, as thousands stood in the rain approaching two hours past the time we shouldâ€™ve been in, it appeared the joke may be on us.

Thankfully it was just a production delay and, around 9:30 pm, the crowd rushed in.

First off, the new T-Mobile Arena is gorgeous. Well done in every way, even with a sold out show, there was little to no wait for restrooms, merch, or cocktails. The flow of people through security and access to everything from floor seats to VIP Suites was flawless.

The sound? The best you can get in a stadium. Where other large venues fail with too much concrete and steel to properly absorb sound, the T-Mobile Arena excelled. Itâ€™s top notch. Catching a show at this venue should be on every Vegas to-do list. If your favorite band is playing at T-Mobile, then get to Vegas, because you will not be disappointed.

As for Guns N’ Roses; they nailed it. Even with Axl confined to Dave Grohl’s infamous â€œbroken leg throne,â€ he still exuded his undeniable stage presence and sounded like the Axl we know and love. His vocals were strong and on point. Despite a few missed lyrics at the beginning of the set, the performance as a whole was fantastic. There was not an inkling of the childlike behavior we once saw on the Use Your Illusion tour or throughout the band’s well-documented and sordid history. This Axl, was together, professional, and humble. He even managed a few costume changes, exiting the throne by way of crutches, and returning pushed in a wheelchair by a very sexy and scantily clad â€œnurse.â€

The rest of the band immaculately gelled together as well.

Slash and Duff together are dreamlike.

Match that to our curly mopped, top hat crowned, bronzed and beautiful, Slash. There arenâ€™t too many musicians you can immediately recognize by just a note, but Slash, of course, is one of them. To see him live is a treat in any incantation. To see him live with Guns N’ Roses is historic. Heâ€™s a living legend. 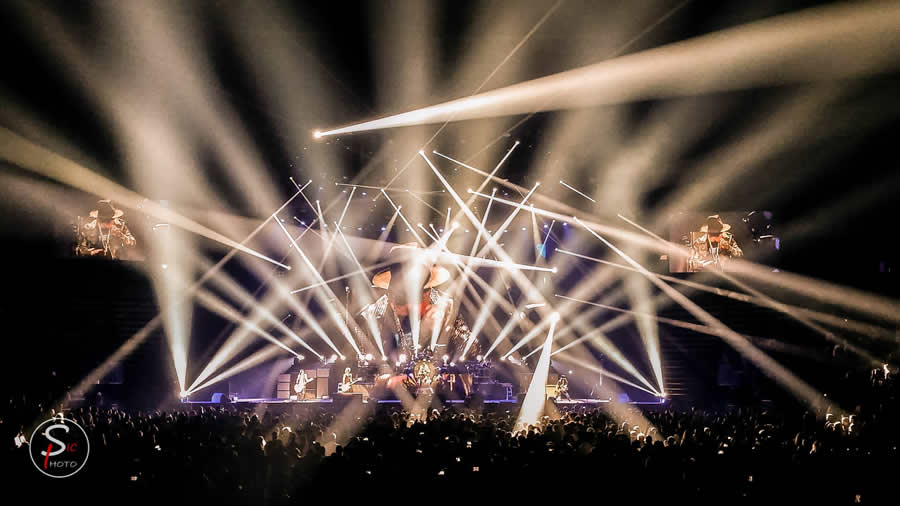 As for the remaining members of GNR, this is where the controversy lies. Who should play? Is it right to call this a Guns N’ Roses â€œreunionâ€ tour without Izzy? Gilby? Adler? Sorum?

The pros and cons are many. There are camps dedicated to each of these past members. The truth is easy. It is what it is. The guys decided on this lineup for reasons that fans may or may not ever know. All that can be said after seeing them play is that it works. Itâ€™s good. Fans will hopefully accept the band as is because itâ€™s excellent.

Rhythm guitarist Richard Fortus is everywhere. Heâ€™s great at what he does, with a stage presence to match his musical talent. His apparent camaraderie with Slash, Duff, and Axl appears genuine and sincere. Heâ€™s been playing these songs for 15 years, and it shows.

Drummer Frank Ferrer is a beast. He is flawless in his execution of the down and dirty raw tracks off Appetite for Destruction, as well as the more complex and intricate work involved in the Use Your Illusion cuts. Covers, Chinese Democracy, Lies; this guy kills it on every single song.

When Axl introduced Ferrer, there was a mix of cheers and â€œboos,â€ which was embarrassing and unfounded. Ferrer is a powerhouse and should be applauded. Itâ€™s not his fault there is so much controversy surrounding his position. In all honesty, for as much as fans love Adler, itâ€™s not hard to imagine that this set may have proved too difficult for him to pull off. Adler has a particular raw style, that is well-known and well-loved, but may not easily translate to much of GNRs recordings past Appetite.

Again, it is what it is.

Sorum could very easily have taken this spot, but again, for whatever reason he isnâ€™t and Ferrer is well suited and more than capable of taking on the tremendous undertaking that the drummer for a 2016 Guns N’ Roses needs.

Dizzy, the longest continuous member of the band after Axl, is always copacetic to have on stage, and Reese is an exciting addition that seems to give GNR a modern sound, filling in beautifully.

All in all, the set list was flawless. Opening with â€œItâ€™s So Easyâ€ and â€œMr.Brownstone,â€ Guns killed it right out of the gate. They seemed to hit it all in the two and a half hour set. There wasnâ€™t a dull moment, even if there was an occasional off note or missed lyric. Doesnâ€™t matter. That is what makes a live show a live show. If you want perfection, listen to the album.

As if that werenâ€™t enough, the stage set, backup dancers, pyrotechnics, and video graphics were impeccable. Just enough of everything without being cluttered or overdone.

Of course, it will be nice to see how it all comes together when Axl is back on his feet, but for now, post-Vegas kick off, itâ€™s safe to say that Guns N Roses is back and better than ever.