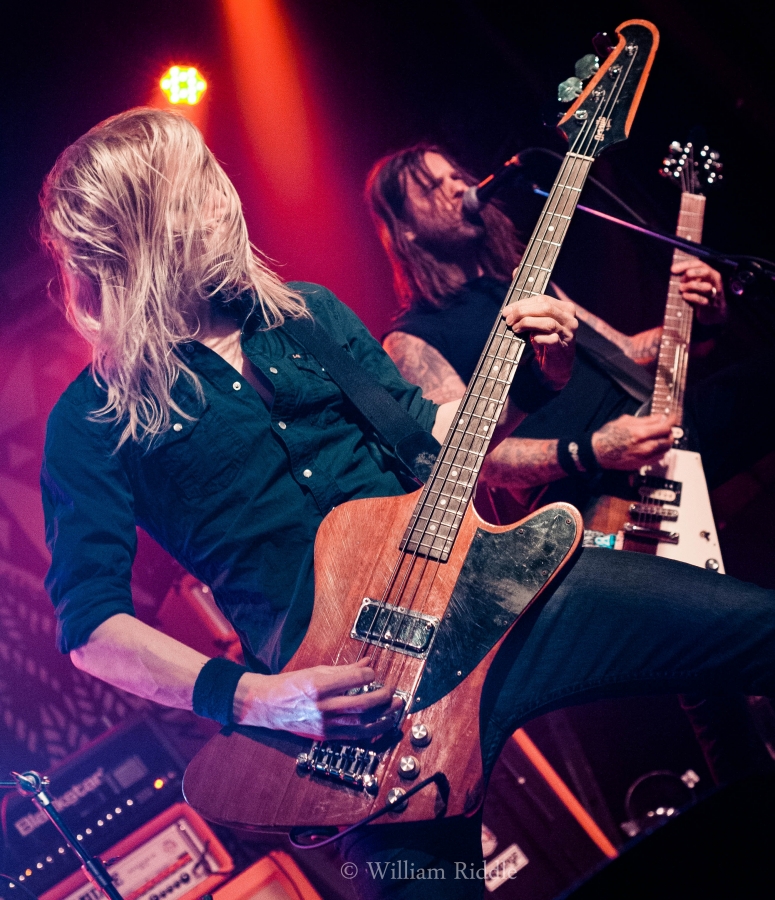 Enter The Swedes! From Gothenburg Sweden, metal band Bombus took the stage at the Wonder Ballroom in North Portland, Oregon for the first time in the US. They are on a North American tour with Graveyard and, in this reviewer’s opinion, blew the doors off the club!

With a sound of their own, albeit comparable to Motorhead, these guys leave some very big boots for the headlining act to fill. I was impressed by their performance, light show and megastar stage presence. This is ‘the time’. The time when you have heard your new favorite band. Bombus is it! It was my honor to have seen them in this jammed packed venue with their amazing light show.

They are on the road with a killer new disc; The Poet and the Parrot. I picked up a copy last night, at the show, and have not stopped listening to it. With the first song on the disc Enter the Night being my favorite, the rest of the disc keeps getting better. They have a new fan!

Check out my photos below of the show and be sure to check Bombus out while they’re on the road and while you’re still able to in a small(er) venue. You will not be disappointed!

More about Bombus
Bombus (Latin for â€œbumblebeeâ€) are a heavy metal band from Gothenburg, Sweden. They started in 2008, as a two-piece, by Feffe (guitar, vocals) and Matte (guitar, vocals). They would eventually evolve into a four-piece in 2009 when Ulf Lunden (bass) and Peter Asp (drums) joined the band.

They are heavily influenced by Motorhead, The Melvins, Black Sabbath, Metallica, Slayer, Poison Idea and The Jesus Lizard although morphed into their own sound after playing their first live gigs.

Official Video for Let Her Die

Bombus released three 7â€ singles (Bring Me the Head of Your Dog/Deep River in 2009, The Slaughter/Und So Weiter in 2009 and A Safe Passage/Cult Leader in 2011) and their self-titled dÃ©but (Bombus in 2010) on their own label Mourningwood Recordings.

In 2012, Ulf Lunden stepped down from playing the bass and was replaced by Jonas Rydberg. Ulf now helps out behind-the-scenes where he takes care of the bands artworks and video clips. Bombus refers to Ulf as the ‘fifth member’ of the band!

The band continued on with a vigorous live schedule hitting the road with such bands as The Sword and Danko Jones. In 2012, they signed to Century Media Recordings releasing a single (Apparatus/Biblical in 2013) prior to their dÃ©but full-length for Century Media (The Poet and The Parrot in 2013).

Metal Hammer Germany says, â€œIf Motorhead had a rocking child with Entombed and Venom, it would sound like Bombusâ€. This spring, Bombus will be supporting Graveyard on a tour of the U.S. which will make a pit stop at the Shelter in Detroit, Michigan on April 27th, 2014. This is your chance to see Bombus in a small, sweaty, stinky rock â€˜n roll club before people see how great a band they are and elevate them to headlining their own theater shows!

Also from Gothenburg Sweden, the three-piece Graveyard (whom played Club Nokia with Motorhead a few days earlier) headlined this bill on a dimly lit stage and a room full of fans. If I had to describe their sound, and I do, I would have to say they have a 70’s hard rock doom influenced psychedelic swedish metal meets stoner blues groove going on. With the fog rolling in to the audience, the Wonder Ballroom erupts as Graveyard comes to life!