Saint Judeâ€™s Lynne Jackaman returns with her new solo project and the release of her debut solo EP NO HALO.

National Rock Review recently caught up with Lynne to talk about her new project Jackaman and EP release, the current state of play with Saint Jude, and her encounter with Jimmy Page.

NRR: Thanks for taking the time to speak to us hear at National Rock Review. We appreciate you taking the time to talk with us today.
So you are just about to release your new EP NO HALO and you had the launch last week in London. How did the show go?
Jackaman: The show was a roaring success. It just was incredible. I am very fortunate that I have incredible fans. Having just done three sell-out acoustic shows whilst I continued to write, which were more like an evening with me singing some Saint Jude songs and some songs that have inspired me. They’ve just been incredible and it was great during the acoustic songs you could hear a pin drop and during the really up stuff everyone was just going for it. 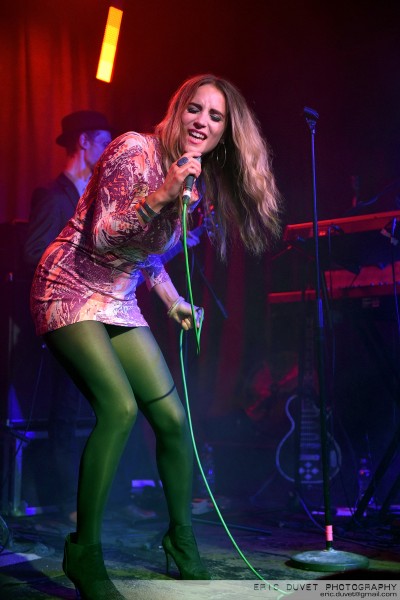 I always completely lose myself in the music and lose myself on stage, so it’s just great. As the last note happens you look up and hear this crowd going crazy and it’s what you do it for you know. So I feel very blessed and very, very positive about the future. I’m really deep in with the new album as well and that’s something that’s going to be pushed quite hard in relation to the EP. The EP I guess is a little teaser if you like.
NRR: You worked on the EP with Guy Griffin from the Quireboys. What was it like working with Guy and how did you two meet?
Jackaman: Guy is one of the good guys. He’s just great and we literally had a mutual friend who introduced us. I’ve done a lot of writing on my own and they are mainly slow songs on piano and stuff. So we just met in a bar in Camden and drank way too much alcohol (laughing) and just said ok, we get on … I like your stuff and you like my stuff and that’s great, but letâ€™s see what actually happens when we sit in a room sober and if anything comes out â€¦ and it did.
There’s a fantastic writing chemistry there. I had a very, very strong idea of what sound I wanted and what I wanted to do hence the fact that I co-produced the EP. I was a bit worried because I’ve got a lot of classic soul, blues, funk influences. I was worried that Guy would be all about rock and he’s just not, he’s a very musical person and we just felt very much at ease with each other. He’s like a brother to me now, I just constantly take the piss out of him (laughing). So yeah, he’s a very, very talented man.
NRR: You recently released your new video for “You Can’t Take Back” and that’s got a really soulful, almost Stax kind of sound with Booker T-esque keyboards and Sax going on. Where you trying to go for a more soulful sound with this project?
Jackaman: I wasn’t really trying to do anything. I didn’t sit there and say ok I’m going to try and do this. I just sourced it completely from the influences that I’ve absorbed over the years. For example “You Can’t Take Back” we got a drum sound and a beat that we wanted and I literally sat in the room and just ad-libbed that melody and those lyrics and then went back and just tidied it up slightly. We went in the studio and did it in one take and that’s how I wrote most of the songs. 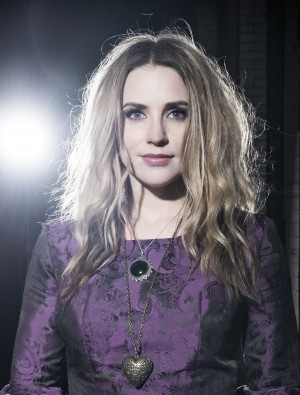 We would get the beat and the tempo that I want and then just literally ad lib over it. It’s exactly the same with “Honesty (Can Be So Cruel)” I just got behind the mic just ad-libbed it, in the same way I did with the middle eight for “No Halo” whilst we were in the studio.
I was just like actually if I just quickly pop in there and whack some lyrics on to that …that’s pretty cool, I love that and that’s why I do it. So I wasn’t sitting down and listening to anything then. I wasn’t listening to any Stax or Motown stuff it’s just a complete release of everything I’ve grown up listening to.
I grew up listening to Sam and Dave, Etta James, Aretha Franklin, Sam Cooke, Donny Hathaway and I’m just a sucker for melody. Obviously lyrics take a bit more time, but I just find if you can get a good title the song tends to tell you what it’s going to be about. If you tend to have a slow vibe it’s going to be slightly melancholy but if it’s up-tempo it’s going to be feisty you know. So yeah, all these people it just came out really.
NRR: So a lot of people have said you’ve put your heart and soul into this new EP. Where do you find your inspiration for your song writing?
Jackaman: I find it from people, when I listen to them it takes me somewhere else. I get Goosebumps, It makes me cry, It makes me want to dance, It makes me want to go and tell someone what I think of them, it gives me courage you know.
I find it from everyday life with lyrics as well. So basically I live my life day to day and I’m a complete slave to music. You know some days you have money and things are great and other days you don’t have money and things aren’t so great, that kind of stuff. For me it’s a release, it’s like my therapy.
If I feel down and I don’t feel quite right I will go upstairs and sit in front of the piano and I will write a song. When I’m not singing and I’m not writing and I’m not performing I just don’t feel right.
NRR: I made a comment in my review of NO HALO that “Honesty (Can Be So Cruel)” deserves to be heard in grand concert venues like the Royal Albert Hall. I can visualize it being played there.
Jackaman: Thank you so much for that. What a wonderful comment.
NRR: I know you’ve played the Royal Albert Hall before with Saint Jude when you were touring with the Waterboys. What was that like? 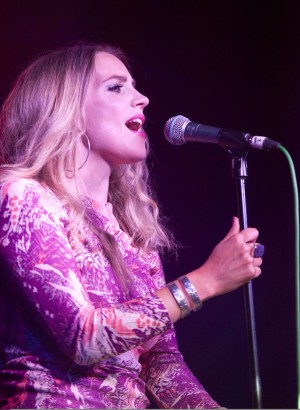 Jackaman: It was incredible. I mean I’ve told this story before. The sound is ridiculous. When you sound check you hear the bass and kick drum echoing off the back wall, which obviously feels like its miles away and you think oh this is going to sound terrible. Then the bodies come in and the sound in there is just incredible.
After the show some of the band were saying â€˜you’ve got to go up there to one of the boxesâ€™ and I said ‘why?’ and they said ‘oh because Jimmy Page is up there’ and I said ‘yeah of course he is’ and I just expected that when I got up there they would try and lock me in the room, but they didn’t and Jimmy Page was in there.
He had come to see me sing and that just absolutely blew me away and my dad hadn’t seen me sing for a long time and that was a very big thing. It was just a very, very emotional night to get to say you’ve played the Royal Albert Hall.
NRR: Obviously the EP is just about to come out. What are the plans to release a full length album? Do you have plans to do that any time soon?
Jackaman: Absolutely, I’m working on the album now and that will be released as soon as possible. Obviously, I want to make sure the songs are there and I want to make sure that the team is there. There’s been lots of things that I really, really want to put in place. Yeah, absolutely envisage all going well that it gets released this year, completely. 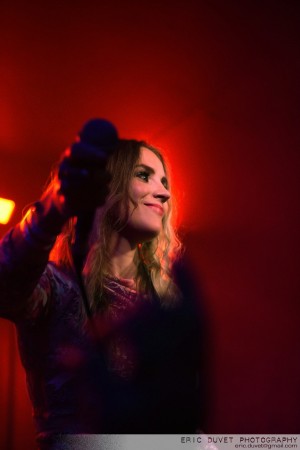 The new four-track Jackaman EP NO HALO will have it’s official physical release on July 10th. The EP is currently available digitally via Amazon, and will be available on iTunes imminently.

An exclusive pre-order is underway whereby fans can purchase a signed copy of the EP directly. Details can be found on Lynne Jackaman’s Facebook fan page.