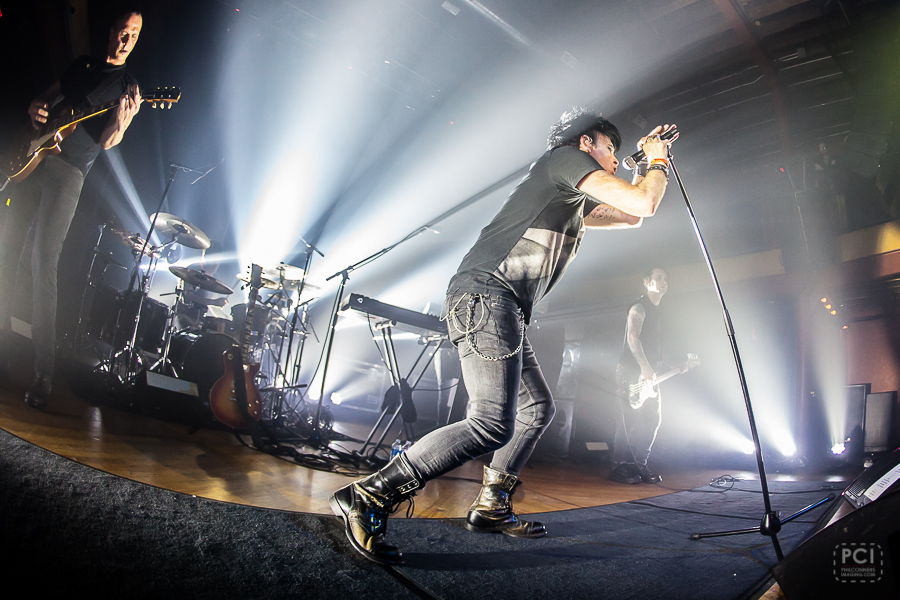 He achieved his peak of mainstream popularity in the late 1970’s with the chart-topping hits, Are ‘Friends’ Electric? (recorded with Tubeway Army) and Cars, but maintains a loyal cult following.

His latest studio album, Splinter (Songs From A Broken Mind) returned Numan to the UK Top 20 for the first time in 30 years. This isn’t the Gary Numan you might remember from the 80’s…

Numan maintains his relevancy in the music industry with his latest release. His innovative, modern approach to crafting this latest collection of songs has melded into a style of cutting industrial tapestries of angst with heavy, thick guitar tracks.

Numan is currently out on his 2014 Splinter tour which made a stop at the Crofoot Ballroom in Pontiac, Michigan on March 28th, 2014. Playing to a near sold-out crowd, Numan enthralled and captivated the audience throughout his entire set. He blended in new songs with selections from his past. This kept the crowd engaged and anxiously awaiting to see which song he was going to perform next.

The audience spanned a wide range of generations, from people in their early 20’s all the way up to baby boomers in the their 50’s; some of which even brought their children with them!

There was not a moment of down-time during Numan’s set. He was very focused on the crowd and loved and showed appreciation for their applause and uproaring reception. He would break from his dark and personal lyrics to even crack a smile, make eye contact and acknowledge the fans.

Highlights included the newer tracks, I Am Dust and Love Hurt Bleed along with the classics, Cars, Metal and Are ‘Friends’ Electric?, although he performed these classics in the updated style of his newer, heavier, darker sound.

Numan has transcended and evolved into a musical style comparable to Nine Inch Nails with a splash of the darker side of Depeche Mode.

Set List:
Resurrection
I Am Dust
Metal
Everything Comes Down To This
Films
Here In The Black
The Fall
The Calling
Down In The Park
Lost
Cars
Pure
Splinter
When The Sky Bleeds
Weâ€™re The Unforgiven
Love Hurt Bleed
A Prayer For The Unborn
– Encores –
I Die You Die
Are Friends Electric
My Last Day

Our photographer, Phil Conners, was on hand to catch Numan’s set. Here are his images from the night.