PREserker offers extreme music fans a taste of things to come at Berserker III with a free show at Small’s in Hamtramck.

The close quarters of Small’s main music room were a tad closer than usual. The room was split between the main stage and a temporary side stage set up near the soundboard for the Berserker III preview party dubbed PREserker. This free event gives fans a taste of things to come with an assortment of Detroit talent.

Pandemonium starts things off with a youthful dose of punk rock on the main stage. This young crew is exuberant as they play a couple of originals and then a series of covers including a lost track by Devo and an impressive cover of “The Trooper” by Iron Maiden.

As the first band finishes, we turn to the side stage. In swirling electronic drum beats layered with clouds of electrical static and droning chords, a voice howls from the void as Plasticizer starts their set. It is as if the screams of a world shrink-wrapped in hyper-sonic guitars and beats is hurtling through a wormhole in space and time. It is a mesmerizing spectacle to behold.

Low and terrible in the certainty of the grave comes the doom metal of Stone Ritual. Three guitars work together to create a soup of thick and gritty riffs that pours over you in a lava flow of cavernous sound. Ageless talesÂ of Nordic gods toying with the lives of mortals would best describe how this music feels.

Switching over to the other stage, Gore hits the venue with a buzz saw of old school punk. Thirty years in the Detroit scene has sharpened this band into a razor. Some of the audience can’t contain the energy and get a pit going as the band plays a great cover of Motorhead. Gore plays punk with hardcore gusto.

Reverend is up next on the main stage. The band takes us onÂ a journey with strangely seductive music. The drumming is hypnotic with demanding runs that compel the audience and fix their attention on the stage. The guitar and bass are left to wander fertile fields of riffs which go from sublime to a maelstrom in the skip of a beat. This music is experimental and very satisfying.

Packed on the other side of the room and flanked with light cubes and amplifiers, The Armed exploded with chaotic noise and rock fury. The lead singer grabs a fan from the audience and starts to slam into them. This lights the fuse and the audience tear into the band and each other in a beautifully violent dance. Shawn Knight (Berserker promoter and Child Bite vocalist) gets into the mix and ends up carried about like a sack of potatoes. Now this is how you engage your audience.

Cloud Rat takes the main stage and instantly whips into a set of blistering grind. This music is feverish with chilling speed and ferocity. The vocals at times are reminiscent of Tomas Lindberg from the first At The Gates full-length album. This final act puts a feather in the cap of a great evening of music and sets the tone for more things to come at Berserker III in Detroit. 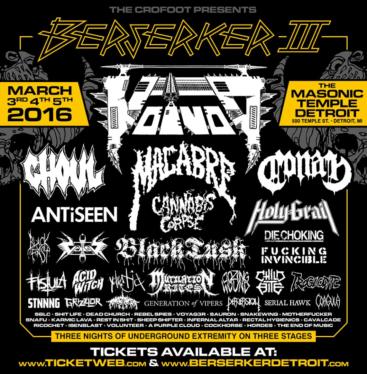