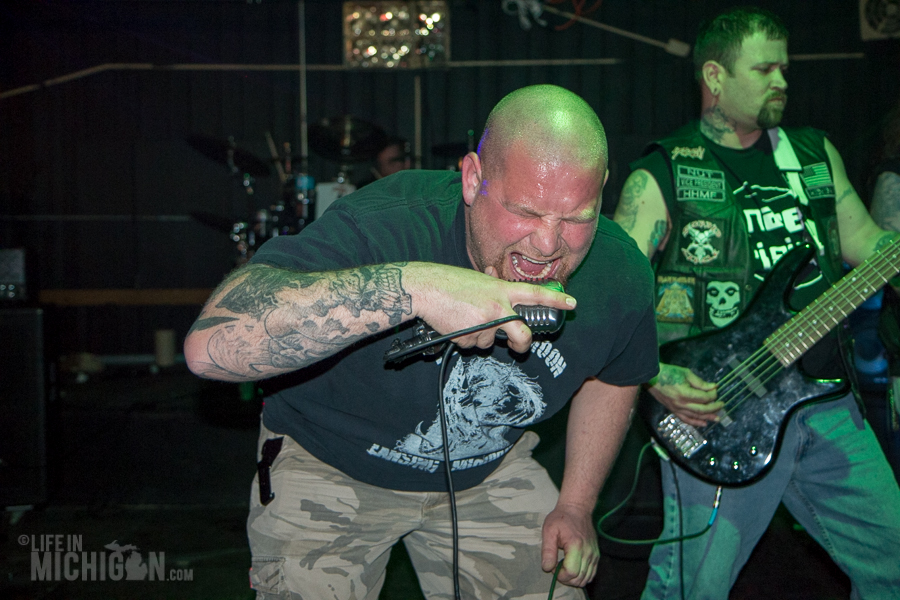 On Sunday, March 23, 2014, I attended a cancer fundraiser concert for local music fan and promoter Staci Burke at the Maidstone Theatre in Ypsilanti, Michigan.  Staci has been embattled in a fight for her life for some time. Just as she thought that she had it beat, she was informed that the cancer was back and will require more surgery.  Even though the Affordable Care Act provides some relief, it doesn’t cover installation of a wheelchair ramp, which will be needed after the next round of surgery.   This is where the local music community enters to help Staci cover the costs!

The evening of music at the Maidstone Theatre started out with a little bit of classic rock from Anonomous Biznezz. They laid down some classic jams which featured the stellar vocals of Maggie Cocco (daughter of band leader and guitarist, Nic Cocco).  Her vocals were spot on during the cover of Bonnie Rait’s ‘Something To Talk About’.  The band also did a couple of Maggie’s original tunes which will be on her upcoming debut release.  Keep an eye out for Maggie Cocco, she is a very talented young lady.

Talk about “and now for something completely different!”  Transcending Fate calmly took the stage and then tore it into pieces!  Crafting songs that had depth and power, these guys were explosive.  At times I was reminded of Lamb of God and at others like the glory days of Pantera.  Dan (didn’t catch his last name) on vocals was a commanding presence taking the band through a blizzard of pulverizing tunes.  He has an excellent range in his vocals.  With great dual guitars, a fantastic bass player, and an awesome drummer (who I learned just turned 17), this is a band to watch out for!  Go see them live.  You will not be disappointed!

I have heard about Banned From E.A.R.T.H., the Black Sabbath tribute band covering the Ozzy years, for a while now.  They have been terrorizing the Detroit area for a few years already.  I’ve wanted to check them out, but the timing of their gigs never worked out for me until now.  In one word, they are AWESOME!  Wow!  I’ve seen Sabbath with Ozzy, Dio, Ian Gillan, and even the dark days with Glenn Hughes.   I can easily say that seeing Banned From E.A.R.T.H. is like seeing the original Sabbath.  They played some of the standards such as ‘War Pigs’ and ‘Black Sabbath’ to perfection and dug into the Sabbath archives to polish up such gems as ‘Hole In The Sky’, which holds a special place for me since  the first Sabbath album I ever bought was Sabotage.  Phenomenal!  The guys in the band were very cool and are big supporters of good causes, such as this cancer benefit concert.  If you love Sabbath and seriously, who the hell doesn’t, then you must see this band live!

Anyone would love a good screw after listening to Sabbath, right?   Detroit punk band Screw can definitely put it to you!  I don’t know about you, but I love straight up punk music in the vein of The Misfits, Social Distortion, and The Sex Pistols.  Screw drove it home with a great set of jumping music that included some Social Distortion and a great Iggy and The Stooges cover in honor of the late Scott Asheton.  The whole band is fantastic, but I really dug the guitar playing of Rod Tusek.  That man can play!  If you are looking for a good time with a lot of pogoing fun, be sure to check out Screw.

Last, but far from least, Howell, Michigan’s Severing the The Need demolished the stage with a megaton of death.  These guys love what they do and it shows.  Their music defines the word brutal.  Dual vocalists provided the guttural intensity, hell bound screams, and a barrage of stage presence.  Dueling guitars (7-strings tuned down to low G for the love of Satan!) combined with death defying drum work and fearless bass runs, encased the crowd in a seething wall of metal.  Oh, and if you ever want to hear the most extreme version of Prince’s ‘When Doves Cry’, then you need to go see Severing The Need.

All in all a great night of music and all for a very worthy cause.  If you are interested in helping out, you can make a donation here