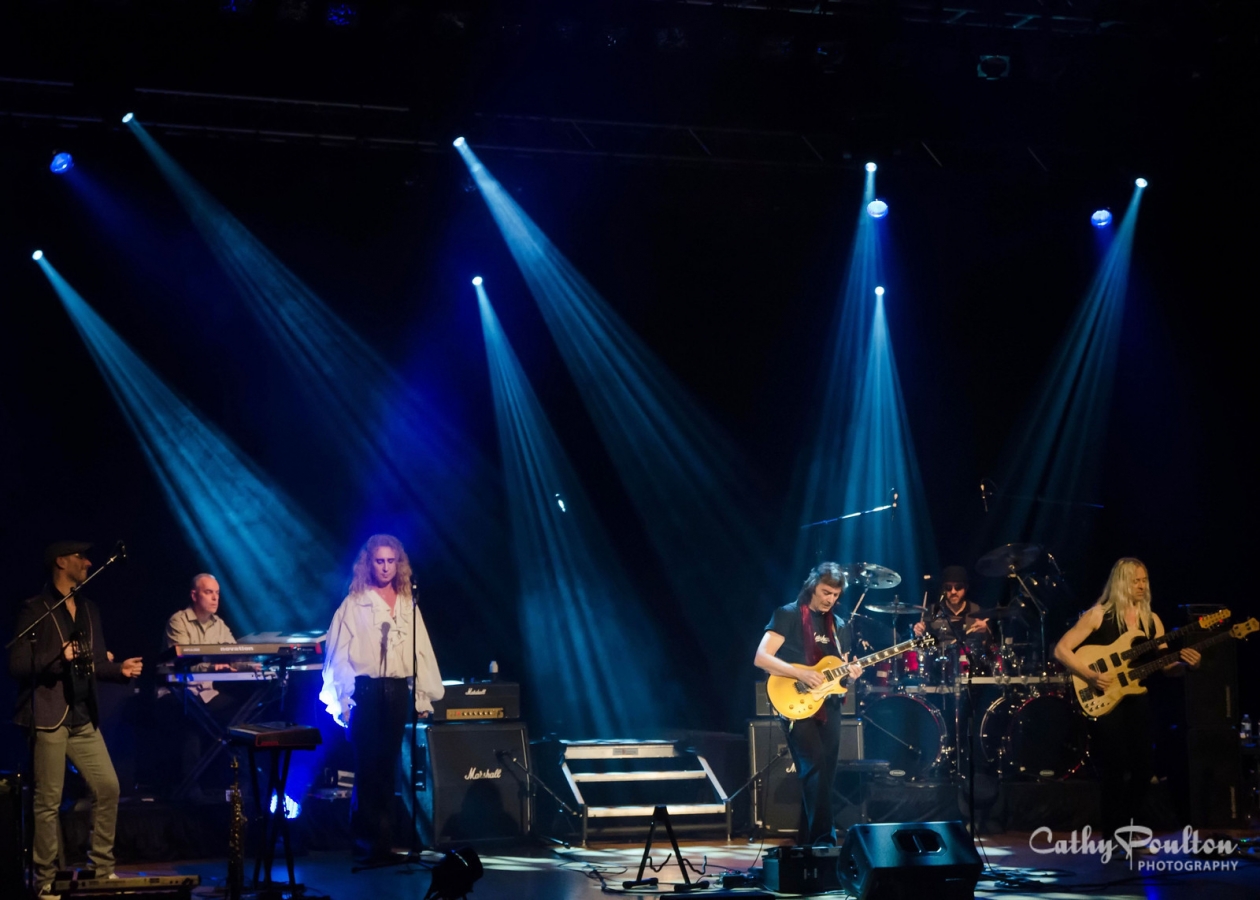 Legendary guitarist Steve Hackett brought his Genesis Extended Tour back to the Scottish Rite Auditorium in Collingswood, New Jersey for two sold out shows. Having just mesmerized audiences here in October, it was a welcome return for his fans in the Philadelphia/South Jersey area.

This area offered early support for the progressive rock movement in the 70’s and bands like Genesis and Yes haven’t forgot it. They loved playing here. The fan base for Genesis, particularly the earlier version of Genesis (with Hackett and Peter Gabriel) is beloved in this region. They have a very loyal following and there is no doubt some of the audience members in attendance tonight were also here the following evening as well.

Having seen their show back in October at this same venue, I wondered if Hackett would be able to reproduce the same vibe that was in the building that night. Hackett and band members had recently expressed how special the crowd and venue were that night. Â I’m happy to say it was no different this evening.

This ‘magical’ night began with Dance on A Volcano, from the album A Trick of The Tail. The songs played on this tour are mainly from the Genesis albums 1971-77. The two-hour forty-minute set list included numbers from such classic albums as Nursery Cryme, Foxtrot, Selling England by The Pound, Trick of The Tail, and the epic The Lamb Lies Down On Broadway.

Hackett was backed by some really talented musicians, Roger King (keyboard), Nick Beggs (bass), Robert Townsend (flute, sax), Gary O’Toole (drums). Singer Nad Sylvan was the perfect front man and sang lead on most songs. He was no Gabriel impersonator. Sylvan had his own sense of style and provided the somewhat campy theatrics that songs like The Musical Box and Supper’s Ready required. His voice was the perfect compliment to this type of music. He had multiple wardrobe changes and it felt at Â times that he was possibly trying to channel an 18th century aristocrat. It was a part and he played it well. The audience really responded to him.

The band (especially Roger King)Â played a stellar version of Firth of Fifth, which ended with a very recognizable Hackett solo. Dancing With The Moonlit Knight just solidified how truly wonderful this backing band was. New band member Beggs was a nice addition. Robert Townsend was amazing on the sax and flute and often times played the parts that Tony Banks (Genesis keyboard) had played on his keyboard. Using the sax and flute instead gave the songs a new refreshing sound. Not that they Â really needed it. These songs are timeless and people never tire of hearing them.

Gary O’Toole sang lead on a handful of songs and got a great response on Carpet Crawlers. The audience also joined him somewhat with their air drumming on the song Squonk….always a fan favorite! There were numerous standing ovations throughout the night and many sing-alongs with such numbers as I Know What I Like In Your Wardrobe, and the slower Afterglow.

The biggest surprise of the night is when Hackett announced they were playing a song that was rarely played live, Lillywhite Lilith. The crowd responded with enthusiastic applause. The show slowed down a bit when he played Horizons. It was just him and his guitar. As loud as this place had been all night, you could hear a pin drop.

A few times during the evening Â a fan would scream out something to him, sometimes during an integralÂ part of a song. Nobody was bothered by it though, especially Hackett as he just looked up and acknowledged them with that wonderful trademark smile of his. You could tell he was really enjoying himself.

The two song encore started off with Sylvan appearing on stage in a full length coat, and telescope in hand. He proceeded to scan the room with it, backedÂ by the haunting opening chords to Watcher of The Skies. The show ended fittingly with Los Endos, an encore staple.

This was a great show. The fans walked away very happy as they were still singing the songs in the parking lot. There is no doubt that this area has a love affair with the music of Hackett and Genesis. I walked away hoping he feels the same.

Set list:
Dance On A Volcano
Dancing With The Moonlit Knight
Squonk
Fly On A Windshield
Broadway Melody Of 1974
The Lamia
In The Quiet Earth
Afterglow
The Musical Box
I Know What I Like In Your Wardrobe
Horizon
Firth Of Fifth
Lillywhite Lillith
The Knife
The Carpet Crawlers
Suppers Ready
Watcher of The Skies
Los Endos