The Answer return in 2016 with Solas, their most personal, emotional, thought-provoking, and possibly strongest album to date.

After ten years, five albums and countless live shows, The Answer returned home from their 2015 Raise A Little Hell US tour battered, bruised, and emotionally drained. Wondering what could come next creatively, things got even worse personally for vocalist Cormac Neeson and family. Neesonâ€™s newly born son arrived three months premature and would spend the next four months in hospital fighting for his life.

“I look back at that time of my life as a darkness I didn’t know existed. It felt like all the lights in the world had been dimmed and weren’t ever coming back up again”, explained Neeson. “I emerged from that whole experience a different man”.

For Neeson, Solas was the vehicle for expression during a turbulent time in his life. “I had a lot to say and to get off my chest.”

Guitarist Paul Mahon recalled wondering if the band would ever play together again. 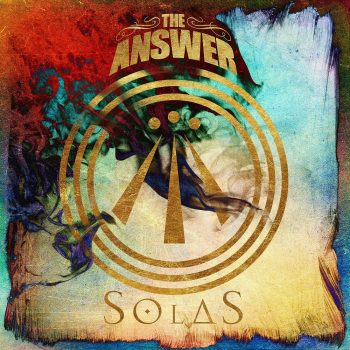 Solas, the Gaelic word for “light”, is an apt title for the band’s sixth album. Out of the darkness comes the light, and this is the verdict:

Solas opens up with the dark and brooding, atmospheric track, “‘Solas”. The song slowly gathers momentum as it rumbles along. With slow to medium paced, but ever driving drum rhythms from James Heatley, and smooth atmospheric bass grooves from Mick Waters, the music builds and progresses to a choral climax that sounds haunting, enchanting, and epic.

The dark atmosphere continues with “Beautiful World”. Co-written with Neil Davidge (former Massive Attack producer). This number starts slowly, with a haunting fragility in Neesonâ€™s voice as guitar and string effects build toward the chorus picking up pace with classic guitar work from Paul Mahon, which compliments Neesonâ€™s wails beautifully.

The dark character of the first two tracks lift and the band stick to their Celtic roots with the beautiful and uplifting acoustic led, “Battlecry”. There are Gaelic chants of “Seo An LÃ¡ A Thainig Mo GhrÃ¡” (“This Is The Day My Love Arrives”), accompanied by additional layers of beautiful guitar from Mahon and pounding rhythms, which build as the song progresses.

“Untrue Colour” is a throwback to the eighties, with an unforgettable Thin Lizzy-style guitar riff that grooves along with synthesised elements and an immense chorus hooks this is difficult to get out of your head. This track would be an excellent choice for a single release.

The band pay homage to their Northern Irish roots for “In This Land”, and give a huge nod to some of the fighters in music and sport from Northern Ireland, and the struggle to do what one believes and trying to make it during difficult times. Van Morrison, Rory Gallagher, and Alex “Hurricane” Higgins all get a mention, as do the Troubles (also known as the Northern Ireland conflict). It is a beautiful piece of music with acoustic guitar, mandolin, and strong underlying rhythms that entwine and embrace accompanying clever songwriting from Neeson.

The Celtic influence continues with the quiet “Thief of Light”, before the haunting and cinematic bluesy southern rock vibe of “Being Begotten”. This track could easily fit on Sons of Anarchy episode or in a film.

After the slower middle of the album, the pace picks up again for the classic rocker, “Left Me Standing”. This song is probably the most typical of The Answer on the album, one which wouldn’t have seemed out-of-place on their previous releases. Again, memorable guitar play from Mahon and the drums of Heatly drive the song along with solid bass from Waters.

“Demon Driven Man” mixes funky rock grooves with a subtle background of mandolin and other layered elements. The track feels like it could have fit with The Answerâ€™s previous album, Raise A Little Hell, and, although it is might not be the strongest track on Solas, it certainly isnâ€™t weak.

“Real Life Dreamers” is another classic rock track, closer to some of The Answer’s older material from the likes of Revival. The song also features beautiful, strong vocals from Irish singer-songwriter Fiona Kane.

In summary, Solas is a beautiful piece of The Answerâ€™s history and one of their strongest albums to date. There is a lot of personal thought and insight from the band members, none more-so than Neeson. Solas captures some of the darkness, fragility, frustration, and uncertainty that surrounded the band for a while, but it also enlightens hope, peace, joy, and the positive light that comes from surviving lifeâ€™s struggles and challenges. Solas is dark, brooding in places but also joyous and uplifting in others and provides a link to The Answer’s Northern Irish roots musically more than any other previous album.

Solas is available via Napalm Records on 28 October 2016. Check out the album today; you can listen to samples from Solas (available for pre-order) and Raise A Little Hell on Amazon.