King King unleash Reaching For The Light, which is one of the most eagerly anticipated blues-rock albums of 2015.

After a very successful 2014, which saw the band sweep the boards at the British Blues Awards and tour extensively across Europe, King King got 2015 off to a flying start with their incredible latest offering Reaching For The Light. You would think the band had made a rod for their own back after the success of 2013’s Standing In The Shadows, but Alan Nimmo challenged the band to go into the studio and up their game even more, and they have delivered. 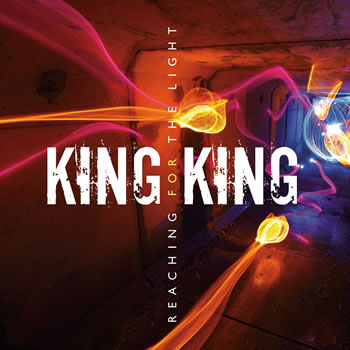 The album has that unmistakable King King sound, and everything you would want from one of their records. Heartfelt tracks like “Lay With Me” alongside up-tempo numbers like “Crazy” and the incredible “Hurricane,” which is the opening track. With “Rush Hour,” you get a gently building blues rock number which develops into a roaring crescendo. It is one of the standout tracks on the album and a song which Nimmo first wrote when he was 16 that is now getting it’s a chance to shine.

It has become customary to have a cover song on each King King album, such as “Jealousy” by Frankie Miller on the band’s last album, Standing in the Shadows, and Eric Clapton’s, “Old Love” on Take My Hand. With Reaching For The Light, the band turn to Paul Carrack with an excellent cover of his track “Just A Little Lie.”

Alan Nimmo is well known for his captivating guitar solos, and Reaching For The Light is jam packed full of them. The album is oozing with incredible Hammond riffs as Bob Fridezma is channeling his inner Booker T Jones. This album is most certainly blues rock with a lot of soul.

Is it too early to call this album of the year? King King are no longer standing in the shadows.