The much anticipated record All or Nothin’ by Chrome Mollie has arrived with good feeling hits and a touch of throwback Rock n’ Roll.

Detroit Rock City is alive and well with Chrome Mollieâ€™s newest slab of 80â€™s inspired honest to goodness rock nâ€™ roll. Released by the band on their own Chrome Mollie Music label, All or Nuthinâ€™ quickly sold out of its initial first pressing. The band has heated up stages around the Metro-Detroit and Flint areas and demand has them pressing another batch for the fans.

The beginning of Chrome Mollie dates all the way back to 2008 when Danny Justice (guitar) and Dave Stroud (bass) got together with the idea of building an energetic hard rock band that played with power and intensity. Justice and Stroud spent a couple of years gigging with different band members until Eddie Golatka (drums) and Tim Smith (vocals) joined in 2010.

The seedling of this union of exceptional musicians was planted years prior when Golatka, Smith and Stroud had previously played together in a band called Catz Ass. These four musicians made an instant connection and saw the potential in Chrome Mollie.

They hunkered down in The Bunker (Danny’s basement) while getting to know each other as â€˜Brothers in Armsâ€™ and started busting out hard-hitting â€˜in your faceâ€™ original songs. By 2011, Chrome Mollie, emerged from the basement like a blast from a sawed off shot-gun.

A few months later, the band released their dÃ©but EP titled Sumthinâ€™ You Need. They recorded, produced, and distributed it on their own. A strong classic 80â€™s rock sound similar to Bon Jovi, Tesla, Great White, Y&T and John Cougar. Sumthinâ€™ You Need quickly sold out within a month forcing them to release it digitally on iTunes, Amazon, and other digital retailers.

Mollie kept working on new material and released three digital singles in 2013, Dreams, Free Me, and Shake It. Free Me was voted the #1 song of 2013 on Tap Detroitâ€™s TapTopTen list. The band was also featured in the Artist of the Month campaign in the summer of 2013 on ReverbNation and voted a ‘Fan Favorite’ in the summer of 2013 on Flint Rock Radio Banana 101.5 while many other internet radio shows added them to their playlist, worldwide, including Hair Metal Mansion.

In 2014, the band was nominated for Best Hard Rock/Metal Group in the Detroit Music Awards. Their hard work has paid off as the band has played for packed houses on their own headlining shows as well as festivals such as the Uncle Sam Jam in Woodhaven, MI. They have also been building friendships/relationships with Kip Winger, John Corabi, members of Y&T, and Cinderella and landing bigger shows with Stryper, Collective Soul, and Sebastian Bach. 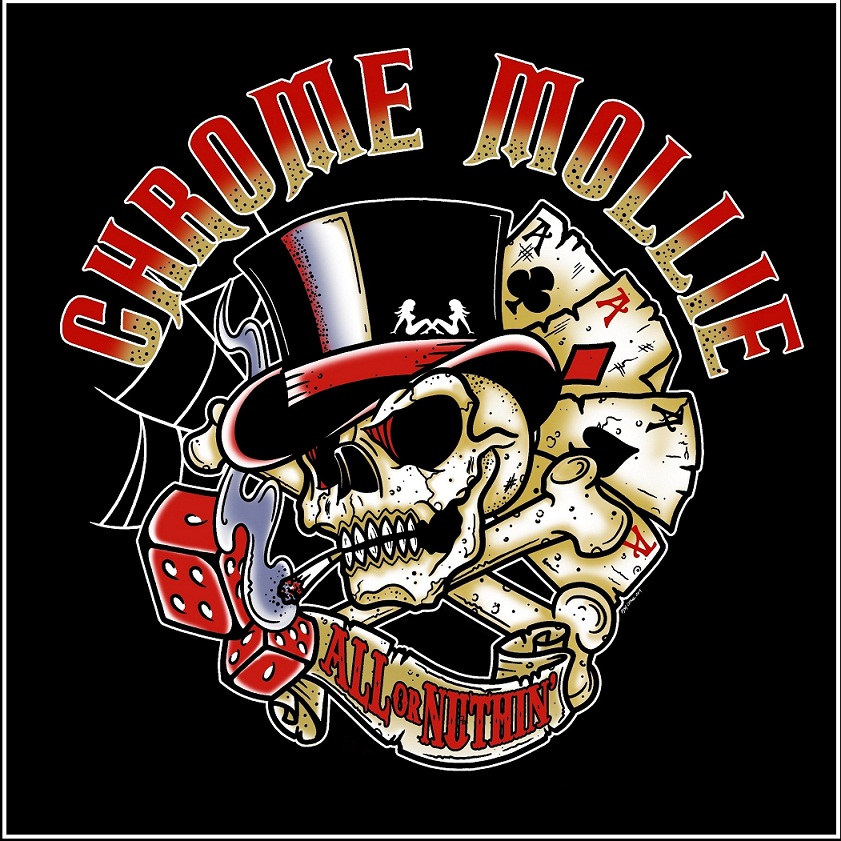 All or Nuthinâ€™ was recorded at Metro 37 Studios in Rochester Hills, Michigan. They locked themselves away for about five months. The album was recorded, mixed, and mastered by Kevin Sharpe, Ryan Arini, and Chrome Mollie.

All or Nuthinâ€™ was released on June 7, 2014 and the demand for it has been overwhelming. The band has already sold out the first two pressings and the third pressing is in the works. The album has been released digitally and sales through iTunes are impressive. Sales are not only in the United States, but also global including England, Japan, and Italy.

The first single, Loud and Clear is taking off. It is being requested on the TapTopTen countdown and received global airplay on internet radio. There are plans for a video release to accompany it. Musically, it reminds me of Dokken with a touch of Saving Abel. There is a line in the song which sums up the feeling of the whole CD, â€œCan you hear what Iâ€™m saying, cuz rock nâ€™ roll is such a sweet sensation.â€ Smith hit the nail on the head singing this line. They are not trying to reinvent the wheel but play down home feel good rock nâ€™ roll.

Ainâ€™t No Doubt shows us the extraordinary playing of guitarist Danny Justice it does the record justice.

Down Low has a Ratt feeling to it ala Robbin Crosby and Warren DeMartini style. Itâ€™s sleazy, the type of song you would expect to hear at a strip club while the stripper slides spread eagle down the pole.

Straight for the Heart has a modern punch to it, similar to that of Black Stone Cherry. Their southern roots pop out on this one. The beginning of the song gives you that, â€˜playing the acoustic guitar on the front porchâ€™ vibe.

All In The Name Of reminds me of Bon Joviâ€™s Slippery When Wet era. It is a song about love not being easy but giving it a chance, a ‘tryin to get the girl’ song.

Spread Love is a ballad and has a feel to it similar to the softer side of Tesla. It is the only ‘serious’ song on the record, deep meaningful lyrics, it is Chrome Mollie’s ‘give peace a chance’ song.

Writings on the Wall is an old track the band wrote when they first formed. It reminds me of Faster Pussycat with a touch of Buckcherry.

So Special has an L.A. Guns mixed with Hinder feel and has some excellent blistering guitar work.

Whereâ€™s The Dog is a song about Mo Doggieâ€™s Bar & Grill which was located in Fenton, Michigan. The bar was a hot spot for local entertainment and was one of the first places they played. Mo Doggies was very supportive of Chrome Mollie and the band wanted to pay tribute to the club which closed its doors last year, R.I.P.

If you are into straight forward hard rock with a passion for volume and an energy that will slap you in the face, then Chrome Mollie is for you. Danny Justice plays his guitar with the rhythm of Warren DeMartini mixed with the craftsmanship of George Lynch and the animated theatrics of Eddie Van Halen, Dave Stroud plays his bass guitar with the charisma of Nikki Sixx, Eddie Golatka plays his drums with the same intensity as Nicko McBrain, and Tim Smith sings the words in a way which reminds me of Jeff Keith with just a hint of Chris Robertson. This record will kick your ass and rock your world.

Our photographer, Thom Seling, was on hand to catch these boys at the Uncle Sam Jam on July 11th, 2014. Here are his images from that night.