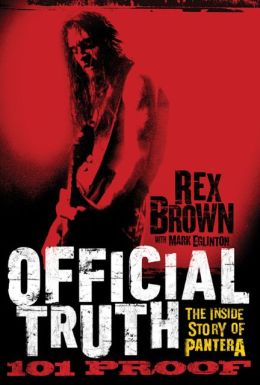 For anyone that has followed Heavy Metal Icons, Pantera, from their humble Texas beginnings to the stratosphere of a Billboard Number One Album and through the untimely and horrific murder of guitar hero Dimebag Darrell Abbott one thing has remained clear- bassist Rex Brown has never said too much of anything.

Until now.  With the recent release of â€œOfficial Truth, 101 Proof, The Inside Story of Panteraâ€ written with  biographer Mark Eglinton, Rex finally gets his say.

Although the story begins with a 2003 phone call between Rex and Dime, the majority of the book follows a set chronological order thatâ€™s easy to follow and makes perfect sense.  Of course there are the secret little nuggets of information on Rexâ€™s life before Pantera, (Rex played tuba?! Who knew?!) to the inevitable destruction of the band, itâ€™s all in there.  And from all accounts Rex has a phenomenal memory.

Rexâ€™s tales of his time in Pantera focus mostly on his role as the â€œmiddle manâ€ for basically every band dynamic, most notably the he said / he said of Drummer Vinnie Paul Abbott and Vocalist Philip Anselmo.

Although there is the ever pressant undercurrent of alcoholism and Texas sized partying, this book lacks the fireworks of bios such as Nikki Sixxâ€™s â€œHeroin Diariesâ€ or Anthony Kiedisâ€™s â€œScar Tissueâ€.   It didnâ€™t draw me in relentlessly as other books of this nature have (even though I have spent many a time in a head stomping Pantera mosh pit) I still found it to be a poignant and heartfelt account of life in a monstrous heavy metal band.

Maybe itâ€™s just a little more sad since you know how the story ends?

But seriously, read the book. Itâ€™s like finally getting the quiet kid in class to open up. You may not like everything he has to say, but as Rex repeatedly states â€œâ€¦I felt that the real story of this band â€“ at least from where I was standing â€“ needed to be told.â€