Portugal is known for many wonderful things. With the upcoming release from dark goth rockers, Moonspell, great music is again one of those things.

Napalm Records is bringing out a welcomed present for the cold winter months, check your local listings. On Mar 17, 2015, for the US, Moonspell will be back with the Extinct LP. This five piece formed in Aug 22, 1992 and is Fernando Ribeiro (vocals), Ricardo Amorim (guitar), Pedro PaixÃ£o (keyboard), Aires Pereira (bass), and Miguel “Mike” Gaspar (drums). Don’t be afraid of this being a foreign release. The post production is fabulously done and you would be hard pressed to think it wasn’t a native English speaking band if you weren’t already a fan. 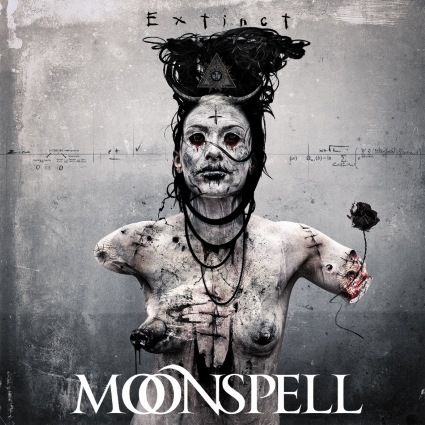 There is a definite Type O Negative feel about the band that comes mainly from Fernando’s position behind the microphone. As stated above, the mixing is on par with a top flight production. The guitar playing of Ricardo, both electric and acoustical, has well done solos, “Medusalem,” and showcases his ability to help tie the group’s sound together. Pedro treads well with the duty of sampling and adding the keyboards giving the feel in certain songs, “Domina,” without going too far and making them stand out. Miguel’s drumming is very well done. It doesn’t need the thundering double bass kicks to hide what may be deficiencies in his playing. He is a very smooth musician and keeps the rest of the guys moving along nicely. Aires with his bass playing helps to lend the vibe of the doom metal sound that would make Peter Steele smile, such as on “The Last of Us.”

The is a planned tour in support of the release starting in March. While there are no scheduled US dates at this point, when we hear something, we’ll be sure to pass it along to you.