British firebrand singer-songwriter Louise Distras gives the music community their first taste of her forthcoming album, scheduled to be released in the fall of 2018 and the much-anticipated follow up to her 2015 debut album, Dreams from the Factory Floor. 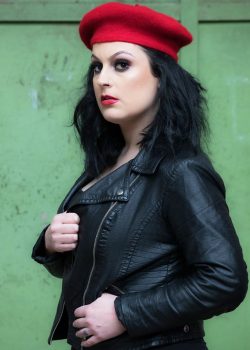 Titled “Land Of Dope And Glory”, Louise returns with two-minutes-and-eighteen-seconds of buzzing anthemic punk rock that is a fired-up two-fingered salute to consumer manipulation from big business and state, it’s words delivered directly with an infectious chorus designed to spread the message far and wide.

“G.O.D. stands for gold, oil and drugs,” states Louise. “Because in a world where God is money, it feels like the constant consumer manipulation that we as people face on a daily basis from big corporations and government stands against everything we value as human beings; peace, love and understanding.”

“Land Of Dope And Glory” is the perfect teaser of what to expect come from the new album, recently recorded in Oakland California with Ross Petersen (Bruce Springsteen, Goo Goo Dolls, The Vamps) and Steve Whale of The Business. Louise’s talent for crafting powerful and direct messages with addictive melodies over righteous punk rock hooks has really come to the fore more than ever before. Hold tight.

23 April Stoke on Trent, The Underground

10 May London, The Underworld