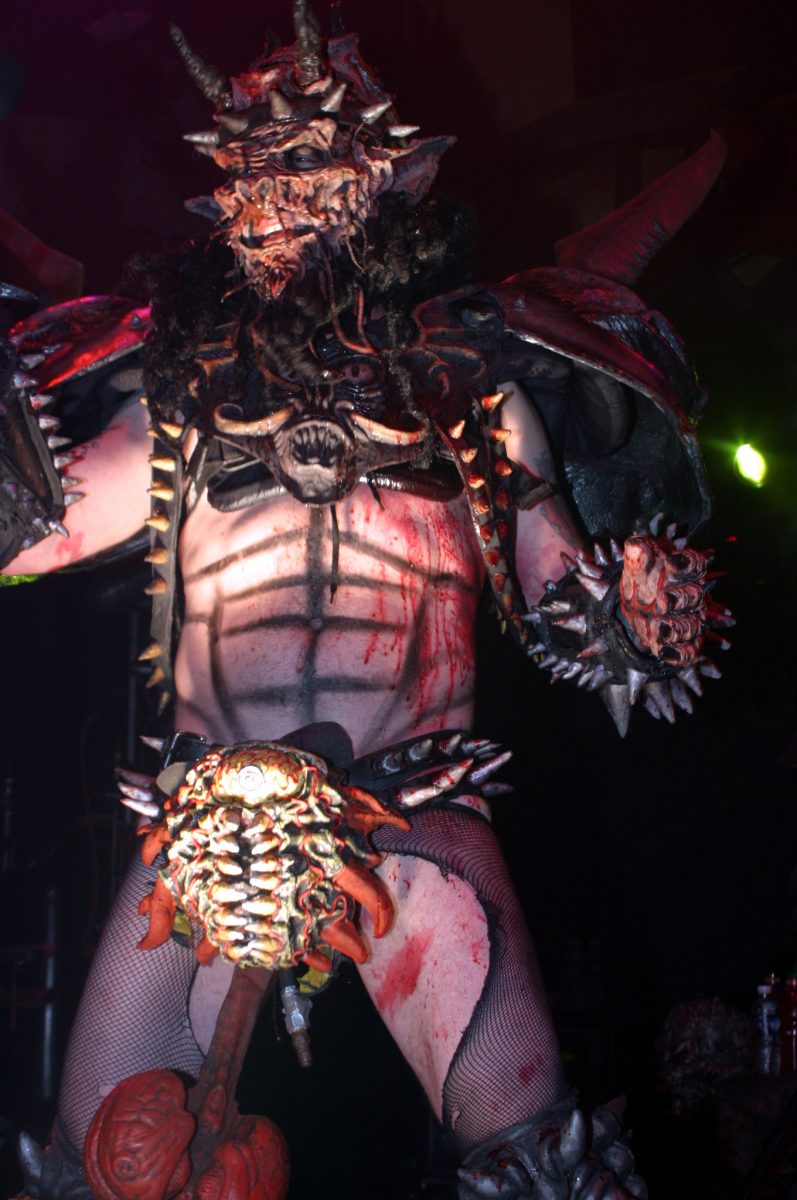 Nothing can strike fear in to the heart of a city like the announcement of the intergalacticÂ juggernaut GWAR bringing their dreadnaught of blood, guts and sonic mayhem to town.Â Led (poorly) by pig-nosed lead singer Oderus Urungus, they began wandering the world, where they were quickly discovered by music mogul and mob boss Sleazy P. Martini. Transformed into the ultimate heavy metal band, they set about the business of destroying the human race with this savage sound, throwing great â€œconcertsâ€ where thousands of humans would be lured to their deaths.

But this commotion would not go un-noticed in the vastness of the cosmos, and soon GWAR was under attack from a huge variety of both super and not-so powered adversaries. A GWAR show will see slaughter wrought upon anything within swordâ€™s reach as GWAR defends their blood-soaked crown of metallic opulence from the legions of the lame that would seek to sully such things, and deprive YOU of the sick fun you so desperately need, need to make existence in this diseased and miserable world somehow bearable, even with an axe through your skull.

Supreme leader Oderus Urungus channeled his voice in to my skull today and had this conversation with me while the Cuttlefish of Cthulhu had it’s way with my physical being.

“Madness at the Core of Time” Tour Kicks off October 2nd

After a week and over 35,000 signatures, Antarctic overlords GWAR finally have officially reacted to the petition started by Jeff Cantrell of Morehead, Kentucky on Change.org to have GWAR play the Super Bowl Halftime Show. The petition can be signed at Change.org/GWARBOWL.

“It has long been the joy of GWAR to submit the human race to any number of hideous tortures, and I can’t think of anything more horrible than you having to watch acts like The Black-Eyed Peas and Bruno Mars perform. So the temptation to ignore this is great! But then you start thinking about all of the people that who have never experienced GWAR before, and will be forced to do so if we do get the gig, well, at that point my colossal mega-ego kicks in and I am all over it.”

After a long and wet fart, Oderus continued…”I really don’t think we should be limited to playing the halftime show…I am offering GWAR as an actual team that could complete in the NFL. Think of the titanic struggle involved as the NFL submits their best players, hell, we could play against all the teams at once and still emerge victorious. For too long has the NFL ignored the obvious fact that the players should be naked, blind-folded and armed with battle axes, that land mines should litter the field and whalers should hurl harpoons randomly from the stands. GWAR is throwing our entire cosmic weight (and we are fairly hefty) behind this petition, and command all of our followers, their families, and indeed anybody who has ever existed to sign this fucking thing, and in fact for those who have already signed it to create multiple fake email addresses and sign it again!”

And now to top it all off, today GWAR is ready to bring everyone a little holiday cheer with a select number of shows this December. That’s right it’s Christmas Time with Santa Oderus. These three shows are set for December 27th in New York at Irving Plaza, December 28th in New Haven, CT at Toad’s Place and finally a show in Richmond, VA on December 29th at The National. Tickets for all three shows go on sale this Friday.

In support of Battle Maximus, GWAR will be heading out this fall on the “Madness at the Core of Time” tour. The tour, which features a completely brand-new show full of slavering creatures and deserving victims, is set to kick off October 2nd in Columbus, Ohio and runs through November 17th in Washington, DC. GWAR shall be joined by deathcore heavyweights and label-mates Whitechapel, Richmond, VA thrashers Iron Reagan (featuring Municipal Waste singer Tony Foresta) and A Band of Orcs (who are actually a band of Orcs).

GWAR’s Battle Maximus features twelve brand new tracks that not only honor their departed ally, but tells the story of GWAR’s latest struggle against what may be their greatest enemy yet…the insidious “Mr. Perfect”, who has travelled through time itself to steal the power of GWAR–the power of immortality, and use this power to mutate the human race into his twisted vision of what the “perfect” human should be. Once again GWAR finds themselves as the only thing standing between the human race and the latest super-powered shithead bent on the destruction of GWAR and the enslavement of their worshippers.

The title track from Battle Maximus is streaming HERE.

Check out a stream of the song “Bloodbath” HERE.

Battle Maximus can be ordered from Metal Blade Records HERE, Amazon and iTunes.