Columnist Mike Leslie talks with up and coming Canadian country artist Hayley about her album and music career.

Its sounds like a love song, but donâ€™t call it Pop-country just yet.

Vancouver B.Câ€™s Hayley has recently burst on the scene with the bite that comes with the bark. She has the look and feel of young pop-country contemporaries, such as Taylor Swift and Miranda Lambert. However, spin her first album I and youâ€™ll get a different story of an old soul. The first track, Sounds Like a Love Song, sounds like a well-crafted Sheryl Crowe/Bonnie Rait inspired Pop-Country single. Listening further into the song, you will hear masterful Stevie Ray Vaughan and The Eaglesâ€™ Joe Walsh inspired guitar licks. But make no mistake, this isnâ€™t a Nashville hired gun on the track. This is Fender sponsored Hayley behind the production, songwriting, and lead guitar.

Hayleyâ€™s first LP, I, is one of those records you put on put on repeat, get in your Chevy, and just start driving. Aside from the virtuoso guitar work, the album is a roller-coaster of hauntingly relatable lyrics, enchanting melodies, and rocking jams. With highlights like Sounds Like a Love Song, Huckleberry Summer, and Names in the Summer, youâ€™ll get a good feel of a consistently honest dÃ©but album.

If seeing is believing, check out Hayleyâ€™s live show. The combo of her signature fender guitars, outstanding band, and delivery make Hayleyâ€™s performance very pleasing to the ears and eyes. Including the album cuts, she performs amazing original covers of Emmylou Harris, Golden Earring, and Hendrix. She makes Hendrixâ€™s Little Wing look easy, and trust me as a guitar player, it is not.

I had the pleasure to sit down with the future guitar goddess and discuss all things currently Hayley.

Mike Leslie: So this album is called roman numeral one?
Hayley: Yes itâ€™s my first effort, everything on this album was a first. I wrote a lot of songs about my first love. It was my first time co-producing. It was a great experience and I couldnâ€™t think of a more appropriate name.
Mike Leslie: How long did it take you to get here with a dÃ©but album?
Hayley: Thereâ€™s some songs in there that are 4 years old. With â€œBreaking up with loveâ€, I had the melody in my head since high school. Then there are some songs that are a few months old. You can really here the evolution of where it came from. Looking back, there are some songs that I wouldnâ€™t do right now if someone asked me to pour my heart out on a guitar with a song, but at that moment it was very real. My goal for the record was to make sure it was 100 percent me at that moment.
Mike Leslie: For somebody having a first listen, they pop in the CD and hear â€œSounds Like A Love Songâ€. You here some pop country influences ala Sheryl Crow and Bonnie Rait. Then in storms this bitchin SRV-esque guitar solo.
Hayley: Thatâ€™s a huge compliment. You pretty much named my influences. I love pop music, love alt country. Sometimes people get a little confused put me. You can put me in the genre of pop country or not. But right now, what is the real definition of pop country? I donâ€™t think I really fit into it.
Mike Leslie: people always say â€œyou gotta find your nicheâ€. Sometimes you have so many different influences itâ€™s hard to find a set style. But I believe if you write from the heart that is essentially your niche because itâ€™s honestly you.
Hayley: If you try to be someone youâ€™re not, itâ€™s not going to come through. Itâ€™s a fruitless effort so why spend time doing anything but yourself. I grew up on a lot of different influences and I think you are a product of what you listen to.
Mike Leslie: How long have you been performing professionally?
Hayley: About 5 years, but I started playing when I was six
Mike Leslie: So for you when you start doing music when you are 6 years old do you jump into it full force or is it more gradual?
Hayley: It was never a question of â€œifâ€ I would do music as a career, it was â€œwhenâ€. Living near the Pacific Ocean I spent a lot of time growing up as a competitive sailor which help fund my guitars. So musicâ€™s been something I would do either way. I went to college for a few years and when I was done I realized it was time to do music full-time.
Mike Leslie: So whatâ€™s next??
Hayley: Everything is next. What I love about music is that there is no limit. Thereâ€™s no genre I donâ€™t want to get into, and thereâ€™s no tool I donâ€™t want to learn and experience. Iâ€™d like the freedom to get up every morning and create. Iâ€™m looking forward to more U.S tour dates and experiencing new towns. Why not chase your dreams and what is life if not a daring adventure…

Do yourself a favor, buy the ticket and take the ride with Hayleyâ€™s â€œIâ€

I and I am Hayley are available from Amazon 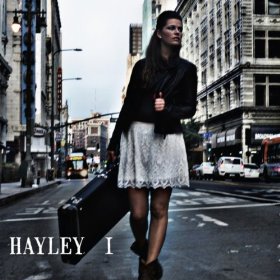 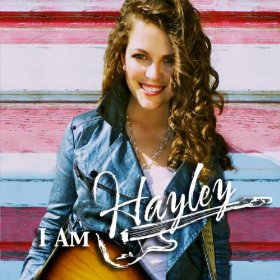 I Am Hayley EP