Blues maestro Joe Bonamassa continues to exceed the exceptionally high standard he has set himself with his new album Redemption.

It goes without saying that Joe Bonamassa has been far from resting on his laurels in recent times. The Grammy-nominated artist continues to fly the blues flag high across the globe with his relentless touring schedule. Besides his hectic solo career, in recent years JB has also managed to fit in further collaborations with the likes of label mate Beth Hart and also rock supergroup Black Country Communion. 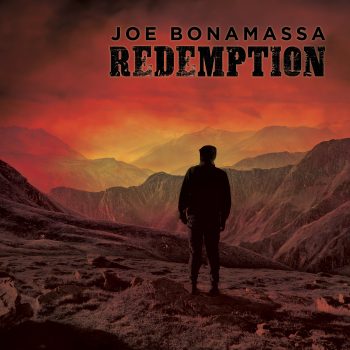 Bonamassa’s already stellar and somewhat extensive discography has been further embellished with his 13th solo studio album Redemption. This being Joe’s third consecutive record of all original material and sees Bonamassa reunite with some of Nashville’s finest music minds such as Tom Hambridge, James House, Gary Nicholson, Richard Page and Dion Dimucci.

During Joe Bonamassa’s recent UK tour, he previewed both “King Bee Shakedown” and “Evil Mama” and both of these incredible cuts feature at the top of the album.

A hard-hitting drum intro akin to Led Zeppelin’s “Rock And Roll” ushers in the opening bars of “Evil Mama”. With its pulsating rhythm, soulful horn infusion and catchy hooks, this track is without a shadow of a doubt a future Bonamassa classic in the making, and the perfect way to start the record.

Bonamassa picks up the pace with “King Bee Shakedown”; a frantic, foot stomping, blues-rock number with a joyous, gospel-tinged chorus that simply sweeps you away. The track features some slide fuelled fretwork and mesmerising guitar tones from Joe.

Redemption traverses the full spectrum of the blues-rock arena. “Pick Up The Pieces” illustrates a jazzier side of Joe’s repertoire.  With the likes of “Self-Inflicted Wounds” and “Stronger Now In Broken Places,” Bonamassa delivers a pair of beautiful, heartfelt and emotive slow blues numbers. The personal nature of many of the tracks featured on Redemption further exemplify the fact that Joe Bonamassa is not just an exceptional guitarist but also an equally gifted songwriter.

Throughout Redemption, there are many stand out tracks. During the country-tinged blues number “The Ghost of Macon Jones” Bonamassa teams up with Nashville’s Jamey Johnson, who adds some beautiful vocals to the track that perfectly accompanies Joe’s blistering fretwork. Whereas “Just Cos You Can Don’t Mean You Should” has a distinctly Albert King vibe to it, much in the same vein as the classic “Born Under A Bad Sign”.

Redemption concludes with “Love Is A Gamble”; a traditional blues number that perfectly suits the big band sound which Bonamassa has been honing in recent times.

Once again Kevin Shirley has worked his magic in the control room. Each of the intricate musical elements and tones featured on the record come together seamlessly and with crystal clarity.

One thing is for sure, Joe Bonamassa is never happy to stand still, and with each and every release he continues to push himself further and harder than before. This approach has certainly paid off with Joe’s most ambitious and diverse studio album to date.

Redemption by Joe Bonamassa will be released via Provogue/J&R Adventures on 21st September. A supporting UK tour that includes a three-night run at the prestigious Royal Albert Hall in London will follow.