May 3rd was a night to remember with international blues sensation Joanne Shaw Taylor on stage with local musician Mike Leslie of the Mike Leslie Band. The sold out crowd at Callahanâ€™s in Aubirn Hills, Michigan had only a slight idea of what was to come for the evening.

A little after 8pm; Mike Leslie hits the stage. He is armed with a Stratocaster and a Bass drum, stomping a driving rhythm to his songs. No Acoustic guitars tonight, his songs are dirty, bluesy, and electric. After three original songs, including a brand new dÃ©but and a few from Mike Leslie Bandâ€™s recently released album, he plays outstanding versions of Fleetwood Macâ€™s The Chain and Creamâ€™s Crossroads.

For the finale he tells the audience heâ€™d like to try something brand new. He quickly sets up a small drum kit. Hey playâ€™s his version of Patsy Clineâ€™s Walkin’ After Midnight while sitting on the kit, drumstick in one hand, guitar in the other. After a shredding guitar solo he sits back down to finish the song, which becomes hard to here at times over the audienceâ€™s screams and whistles. The audience is thoroughly stunned and entertained.He steps down to a long line by the merch table for a meet n’ great. 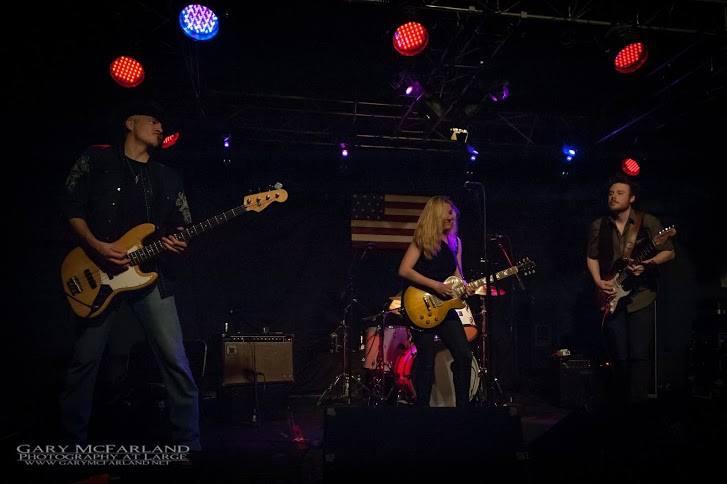 Joanne steps up with her band which includes local Detroit favorites Paul Lamb and Layla Hall. The Blues sensation from England sings like Janis and plays like Stevie Ray or Joe Bonamassa. She shreds through her own songs as well as an outstanding cover of Hendrixâ€™s Manic Depression, a song not very easy to do justice.

The power trio is reminiscent of the Jimi Hendrix Experience, bending genres, and excellent showmanship. For her last song she asks Mike Leslie to join her on stage and they jam an incredible performance of the blueâ€™s classic Going Down, complete with a breathtaking drum solo from Hall. Needless to say, the audience got their full ticketâ€™s worth and then some. One would strongly advise to check out both these talents when they are in town.