Prepare for the sickness isn’t just a battle call, it’s a nasty life for the band known as many but hailed as Lust Of Decay.

Jay Barnes (vocals), Steve Green (guitar), Ryan Coulter (guitar), Phil Good (bass), and Brent Williams (drums) are kings among metal men in the highlands of Kings Mountain, NC. Lust of Decay, has been other things but not until LOD did they reach the levels of respect they have now. Full Terror Assault 2015 will host this five piece and may the Fates be merciful to the campers, or at least their beer coolers. Brent answered some National Rock Review questions for us with a significant assist from Jay in the last one. Enjoy the madness as much as we did.

NRR: What’s been going on with the band in the last year to catch the Full Terror Assault fans up to speed?
Brent Williams: In the last year we have been working on new material for our fourth full-length album, as well as playing a few shows when we can to help keep this machine rolling. And at the same time we all have separate things going on as well, such as me with my other band projects, Steve with his label Comatose Music, Phil works with many bands in the scene, as well as Ryan. So we have been pretty busy.
NRR: Hopefully you guys have a great time on stage this year. Are you looking forward to anything in particular at FTA?
Brent Williams: We always seem to have a great time on stage, and I see FTA being no different. We always enjoy playing for crazy metalheads. And I think we’re all looking forward to seeing lots of old friends, and new, as well as seeing some of our favorite bands over the weekend. And of course partying with everyone. We’ve all played many fests, and it always rules, but this one will be even more fun because everyone will be out and about in the same place all weekend. Instead of the norm which is fest action all day, then when the music stops, everyone goes where they can, but at FTA, everyone will be around all the time, so that will give people a lot of time to hang out and enjoy everything.
NRR: Your bio was a good read. What was it that finally got you guys to rehearse and say maybe this thing could work again?
Brent Williams: Thank you. A few months before we got back going again, me, Steve, and Jay were hanging out again and going to shows, and Jay even did some guest live vocals for Steve and I’s other band, Atrocious Abnormality, and around January 2014, we were discussing the upcoming COMATOUR that Comatose Music puts together every couple of years, and Devangelic and Coathanger Abortion were already on board and Steve needed another band, and the organizer of the Las Vegas Deathfest wanted the tour, as well as Lust of Decay, so we thought about it and decided to start working on a set list, and putting together the full line up so we could do this, and the rest is history. We recruited Phil and Ryan to fill out the band, and LVDF made the announcement in February that Lust of Decay was back and were going to tour, and co-headlining the fest with Mortal Decay, and the response was great. And the tour was a success, minus some van problems here and there, (laughing). 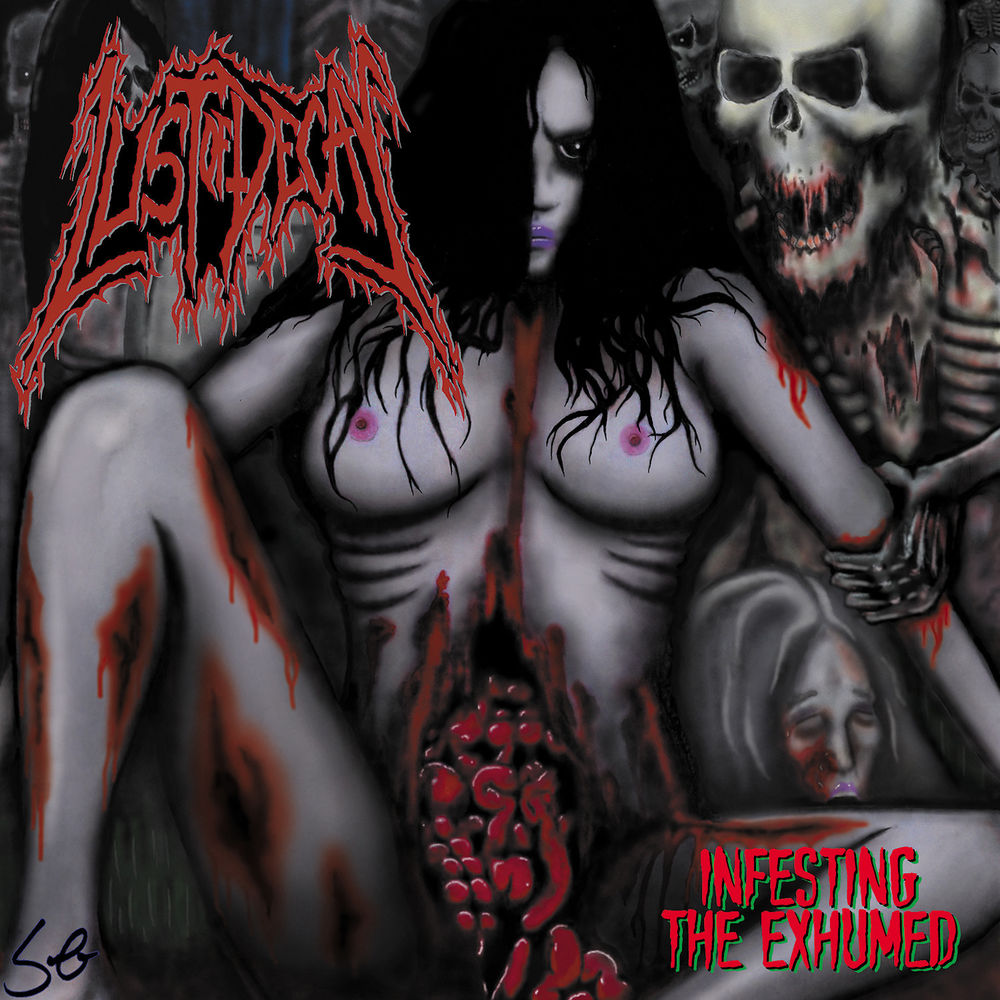 NRR: Brutal death metal is how you describe your sound, what does that translate to in a live show for the fans?
Brent Williams: I guess you could say it translates into a sound of aggression and brutal, extreme metal played with precision that can take quite a toll on your senses if you’re open minded enough to enjoy it for what it is. Our song subjects are gross, or sick to some people, but all are based on real events, so we’re just projecting that type of thing in music form. I’ve always described death metal as “the horror movies of metal music” to the basic type of people who never delve into the extreme. It seems to help them “understand”, (laughing).
NRR: You guys are from the Kings Mountain, NC area. What’s the local scene like and how quickly did you outgrow it?

Brent Williams: Well, Kings Mountain is a very small town with nothing even close to a scene, it just happens to be where we all live and rehearse, but the closest area with any type of music scene is Charlotte, N.C., and Spartanburg, S.C. We live basically on the N.C./S.C. state line, and both are about 40 minutes away. The metal scene in Charlotte used to be very good, back in the 90’s there were over 5 venues that constantly had metal shows and brought some great tours through the area, but that eventually ended when the dance club craze moved into town and took over. Now there is only a handful of venues that will still book and promote metal at all, and some of those won’t cater to the more extreme genres. So it can be very hard to get a decent turnout to a death metal show of more underground bands, but Cannibal Corpse and other bigger artists can draw anywhere from 300-500. It just seems people don’t care to support locals as much.

We have been around a long time now and have made a decent following in the Charlotte area, which we appreciate, but the younger generation seems to only support the bands their friends are in or the stuff they like more, and they don’t seem to try and be supportive of other bands by sticking around to see their performance just to see if they might like it. Spartanburg, on the other hand, has always been the town we call a true home. Mick, the owner of the venue, Ground Zero, has always had our back as well as the metal scenes back in general. And that venue has been around since I started going to shows, and it’s still going strong. Unfortunately, the bigger extreme metal tours are beginning to skip the entire Carolinas area lately so not many shows have been coming around, but we still have some more underground tours that keep the scene kicking. And I don’t know that Lust of Decay ever “outgrew” the local scene, we just found that more opportunities were available to us by playing fests, and other out of state shows. And of course having Â the label’s support that put our CD’s in the hands of people all over the world through the vast distribution tunnels of the underground helped us with that as well.

NRR: What can we expect from the band after FTA is a dark, dominating dream of a grotesque, plotting madman until 2016?
Brent Williams: For the most part we plan to finish writing the new album, but I also expect we’ll play a few local shows if the chance arises so we can keep our chops up. But our main focus is the new album. Not sure how long it will take to write, but it’s been put on hold to prepare for this show, during which, we are also going to debut a brand new song at FTA. It will be the first new Lust of Decay song in seven or eight years I think.
NRR: If for some reason the flames grew cold in the near future and the closed sign again hung in the window of forgotten memories on the Lust of Decay’s storefront, would it be hard to justify another go?
Brent Williams: I think if we hung it up again, there would be no revival. We’re all over 40 except Ryan, and we plan on to finish what we start, and we’re all on the same page about what we would like to do as a band. And we all get along well, and have known each other for many years, and know what to expect from each other for the most part. I think that will be enough to keep us going until we simply decide it’s time.
NRR: You’re already using merch sales for the money to make it to the show. Is merch and the income it brings truly that vital to the continued survival of a band and if someone wants a shirt early, how do they get one?
Brent Williams: Merch sales are everything to an underground metal band, the only other money that is made is from possibly getting paid for playing a show, but that is usually not always going to happen, or sometimes you may get $20-40 dollars for playing because turnout was low. But all the money the band brings in with that is kept in the band to print our own merch and help pay for gas expenses for shows. And being able to print merch is a big deal, it really helps with the financial part of being in a band who does shows just about anywhere, but only if people are willing to buy it of course. We definitely sell more shirts than CD’s these days, but that’s not a bad thing. If anyone ever wishes to order our gear, you can message the band directly at our Facebook page.
NRR: What was the Las Vegas Death Fest 2014 experience like and are all of the bigger festivals a lot alike or are there clear differences between each one?
Brent Williams: Las Vegas Death fest is one of the most amazing fests in the U.S. in our opinion. Not only is it in the perfect city, but it is now held at a perfect venue, right on Fremont Street. And everyone gets to experience a vacation hot spot as well as an amazingly well-run festival. People from all over the world come and experience it, as well as with some other U.S. fests. Central Illinois Metalfest was also once a huge part of the fest circuit and had some amazing shows. MDF is probably the biggest and most attended festival, but they have built it up to what it is. And there are other fests like Building Temples From Death, and the New York area fests are all great places for fans of the extreme death metal world. Everyone is very similar, and everyone has a great time. It’s something every true death metal fan should experience.

NRR: In the many years Lust of Decay has been around, what might be the most bizarre, strange, or simply hilarious experience that comes to mind, besides the needed name changes, (laughing)? A Spinal Tap moment if you will?
Brent Williams: I’ll let Jay Barnes answer this one, he’s our resident funny story teller.
Jay Barnes: I guess this would go in the bizarre category. Me and Murry from the band Severed Savior were at the first ever Maryland Death Fest and this alcoholic, wino, crack whore tried to sell this moldy old bag, so we declined. So, then she pulled her pants down and showed us her razor burnt, pimple snatch and asked if we’d give her a dollar if she showed her pussy. Then security for the show walked out and chased her away, and when he did, she ran into the street and got hit by a car. She then got up, yelled at everyone, and ran off. Classic memories from the first ever MDF.