A new album means a planned out idea of how best to bring the latest offering out to the public. Whore that shit out, Splitwig!

Andrew “Dr. Satan” Derosier (vocals), Yariel “Count Urynael” Gonzalez (guitar), Eric “Lord Pofas” Rivera (guitar), JP “Mr Bad News” Cook (bass), and Thomas Weigand (drums) make up Splitwig, a five-piece from Newark, Deleware. They are gearing up for the release ofÂ Swine BluesÂ on Unleashed The Underground Records coming out in December. Having just finished playing Full Terror Assault 2015, one of the masterminds behind this slamming, brutal, death metal group, sat down with us before it at National Rock Review to give us the happenings with the band. Enjoy the interview of Eric and the beware the whoring of the new album coming to a place near you.

NRR: What’s been going on with the band in the last year to catch the Full Terror Assault fans up to speed?
Eric Rivera: The past year has been a crazy ride for us. We took part in some bad ass shows like New Jersey Deathfest, Delaware Deathfest, Philthadelphia Infest, and a slew of bad ass local one-offs with some sick bands from our surrounding areas. Then, we took a leave of absence from live performances a few months back, to record our debut album.
NRR: Hopefully you guys have a great time on stage this year. Are you looking forward to anything in particular at FTA?
Eric Rivera: This will be our first time on the road as a band so we’re really looking forward to meeting new people, bands, etc, and spreading our sound to new ears.
NRR: Your latest release, Swine Blues, is slated for December 2015, right? Tell me about it. What is something we should watch for when it drops? 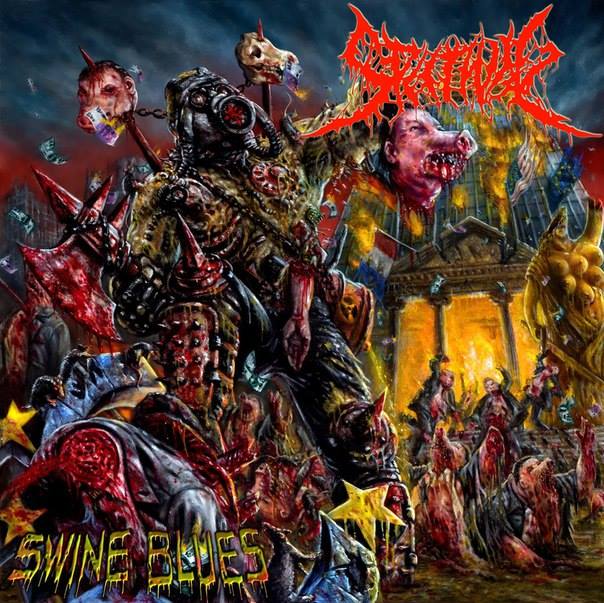 Eric Rivera: Yes, we just got done recording Swine Blues and it will be coming out later this year on Unleash The Underground Records. Slam Worldwide debuted the title track on their YouTube channel a few weeks back, go check it out!
NRR: The album artwork looks pretty brutal. Was this done in-house or did you have someone do it and you approved of it when it done?
Eric Rivera: The album art was done by Mottla Brutal Art. His work is sick! This piece really spoke to us, the graphic chaos really compliments the “take no prisoners” feel of the album.
NRR: Give me some history on the band. Where are you from, how’d you get together, how did you settle on the name, etc?
Eric Rivera: We are a five piece brutal, slamming, death metal band from Newark, DE. The project came to formation at the end of 2011 by myself and original drummer Justin McNatt, rest in peace. We agreed on the name Splitwig because it represents both our love for brutality and also our urban roots, since it’s a slang for having your head split open. After writing a few songs, we recruited my brother Yariel Gonzalez on lead guitars, JP Cook on bass, and Andrew Derosier on vocals. JP, Andrew, and myself once played together in another band. After a demo and a year of playing shows, Justin left the band and we recruited Tom Wiegand on drums. The current line up has been solid since 2013.
NRR: What can we expect from the band after FTA is a dark, slithering dream of a sleeping metal giant until 2016?
Eric Rivera: We plan to whore the shit out of this album! (Laughing),
On a serious note, we’re working on stepping up our merch store and hitting the road more often. We’re also already writing the next one!
NRR: Is there a band or bands on this year’s FTA line-up that you are looking forward to seeing as fans?
Eric Rivera: Oh man! That’s a silly question!! Of course! FTA is jam packed with incredible and legendary bands! Personally, I’m really looking forward to Putrid Pile, Lust of Decay, Internal Bleeding, Sikfuk… I could go on for days!
NRR: Is the merch table as important to you as I’ve heard from some other outfits and what’s the best thing you guys have at the show?
Eric Rivera: Unfortunately, we’ll probably be the only band at FTA without merch, because we’re broke! (Laughing), maybe next year.
SPLITWIG – Field Dressed (2012 Demo out now!)

NRR: For you guys, what is the magic between you and the crowd? Is it just the need to have fun, the stage prsence, or all that and more?
Eric Rivera: It’s always exciting when you start your set for a new crowd and halfway into the first song, people go from the “arms-crossed-tough-guy” look to squinting their eyes with a half smile and clenching their fists. Before you know it, people are beating the shit out of each other and loving it! That’s where the magic is for us! Crowd reaction, for sure.
NRR: What does slamming, brutal, deathgrind translate to on stage for the fans seeing you set?
Eric Rivera: I believe the most direct translation is “controlled chaos,” (laughing). You’re gonna want to body slam somebody but you’re also gonna want to “nae nae”, it’s gonna get weird.