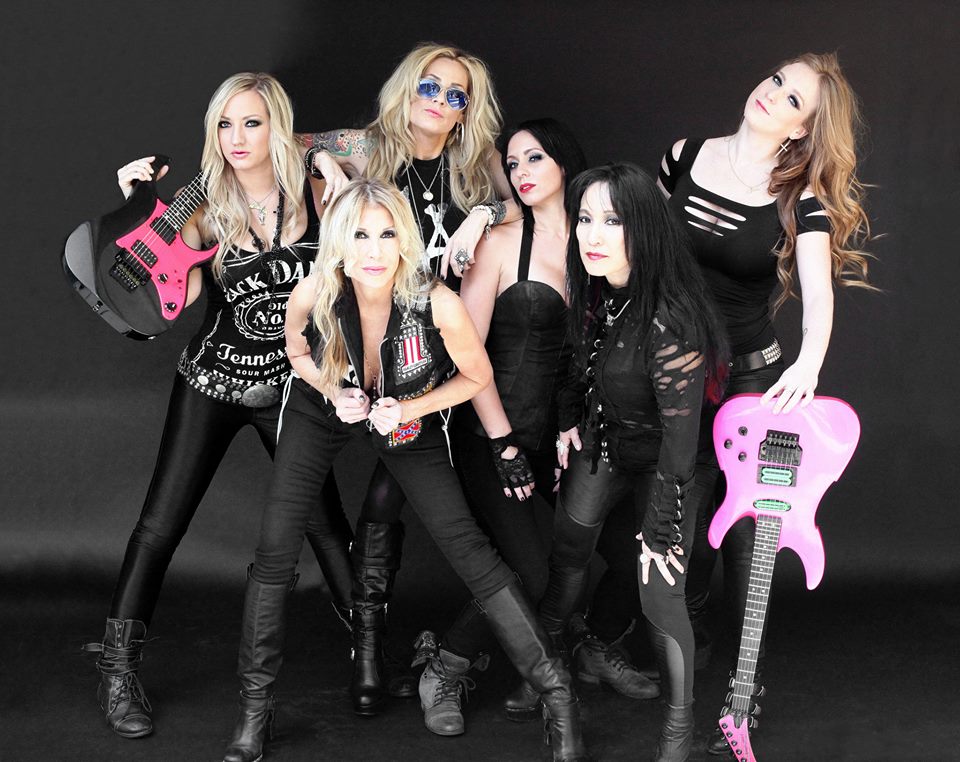 The moment I heard the 80â€™s rock band, Femme Fatale, would be playing their very first Las Vegas show at Vampâ€™d on December 28th, I knew there wasnâ€™t anywhere else in town to be that night.

Although the band only released one album in 1988, it spawned 2 Billboard top 100 hits with â€œIn and Out of Loveâ€ and â€œWaiting For The Big Oneâ€ (currently in heavy rotation on Sirius XMâ€™s â€œHair Nationâ€), as well as the coinciding and unforgettable videos on MTV.Â  Not only that, but lead singer Lorraine Lewis is the co-creator of Fuse TVâ€™s â€œEx Wives of Rockâ€ and drummer Athena Kottak is a stand out star of the show.Â  Love that show.Â  Love Athena.Â  Must see her play.

Originally comprised of 4 guys and Lorraine, Femme Fatale is reformed, renewed, and ready to be released upon Sin City.

In their first ever Las Vegas interview, Lorraine, Athena, Janis, Nina, and Courtney will keep you, ahem, abreast of everything Femme Fatale and get you ready to rock on December 28th.

KG: Everyone in Vegas knows that Vampâ€™d is the coolest place in town for shows, how’d you find out about it and are you excited to play?

LL: Vamp’d is a popular place to play – a lot of our friends have played there and I’m stoked to be invited to the party!!

AK: Â Heard about Vamp’d for a while now, but never been. Super excited to play there!!

NS: Vamp’d is the talk of the town here in LA! I know so many bands who have played there, so I’m excited for it to be our turn!

JT:Â Totally stoked to play Vampâ€™d!!!! Friends told me about it and this is going to be amazing!

LL: Vamp’d will be our last show of 2013, but our FIRST Vegas show ever!!Â  And that makes it even more exciting!

KG: Â When did Femme Fatale decide to go with an all female lineup?

LL: Great idea don’t cha think? Femme Fatale has become a classic band at this point on some levels…I mean this is originally a band from the 80’s – And when I was invited to play on the Monsters of Rock Cruse 2013,Â I knew in my gut that as much as I loved the original lineup, it would be visually off the chain & more fun & exciting if I had a killer lineup of females – so that’s what I went after. Starting withÂ my 2 favorite guitar players, Courtney Cox & Nita Strauss. They’re hot, young, and motherfuckers on their guitars.

KG: Was this a conscious decision or did it just fall into place this way?

LL: Â It was a conscious decision. I always loved watching girls on stage.Â  Bands like Vixen, The Runaways, Chelsea Girls, the Donnas….I wanted to have a killer lineup of girls that knew their stuff, looked sexy, and Â rocked their asses off. I went after Nita & Courtney first…and one by one I found the perfect mix of bad asses and got exactly what I wanted!

KG: Â Many women in the industry have stated it’s a struggle to be a woman in rock and roll. Â Do you agree? Â Do you find it harder/easier/the same than it used to be?

LL: Things are a lot different now then they were back in the day. It was tough for a female to get airplay in those days, but thankfully times have changed. Besides, I love being a girl so whatever…….I guess it sometimes comes with the territory, but not so much any more.

NS: I think that times have changed a lot as far as the “women in music” stereotype. When Court and I were growing up as young guitar players there were only a handful of females in rock for us to look up to. Now that there are so many awesome women in our field, I think the main challenge is to be taken seriously and step outside the stereotype that has been cultivated for so long.

JT:Â When I started, walking into a venue as a female, people assumed you were a girlfriend or a singer, nothing wrong with girlfriends or singers. Saying youâ€™re a musician in a rock band got some scoffs and a few supportive Woo Hoo!â€™s, maybe one amazing person. Some guys, and gals, would say uber crappy things. Getting help at a music store was horrible. The years have changed that. In fact a lot of people get excited when they find out Iâ€™m a musician AND female; (The female part usually surprises them the most.) I have no problems with obvious anti-female-musician BS at music stores at all anymore; and, the ratio of genders playing rock and alternative is getting there. It happens, sexism. I just try to see if Iâ€™m doing anything to further the gap that I should change. Itâ€™s not a guys vs gals issue, both genders succumb to their eraâ€™s mind-set. It is what it is so do your best to break the norm, why not?

KG: Â Are you planning to record and release an album?

LL: There are no immediate plans to record an album, but Nita & Courtney & I have talked about writing together and I can’t wait!

KG: Â How long have you been together with the bands current lineup?

KG: Â Any notable differences in playing with an all female band compared to other projects you’ve all been involved with that were mostly male?

LL: This is a kick ass group of girls and I love being around them – on stage, they give me confidence because they know their stuff, play their asses off & I know they are having a blast!!

AK: I can honestly say that this is by far the funnest band I’ve been in. Not sure if it’s because we are all girls & “get” each other or if it’s because everyone in the band is just really fucking cool!

NS: There’s a lot more fashion direction given in an all female band!

JT: No. Tell me some differential that someone has experienced and Iâ€™ve had an opposite experience. Free your mind and your buttocks will follow.

KG:Â Lorraine, Ex Wives of Rock is hands down the best reality show on TV. Â When you developed the idea did you already have Athena, Bobbie, Sharise, and Blue in mind?

LL: “Thank you” – the show was created by me, and my best friend Lisa Brucker. We seduced our cast with mimosa breakfasts beginning with Bobbie Brown, then Sharise, Blue and finally Athena was the icing on the cake!

KG: Â Athena, were you hesitant to sign on to the show?

KG: Â What are some of the other bands each of you have played with?

NS: Notable bands include Critical Hit, The Iron Maidens, Jermaine Jackson, As Blood Runs Black, Consume The Fire. I have also recorded on many albums, trailers and soundtracks most recently, including Metal Gear Rising: Revengeance (Konami/ Platinum Games) and Heroes Of The Storm (Blizzard).

KG: Â Do people compare you to Vixen?

LL: The Vixen girls are my good friends & I super respect them for all they’ve gone through and achieved!

AK: If they do I’ve never heard that.

NS: I get Lita Ford more often than Vixen. I guess it’s because our names rhyme.

KG: Â With the runaway success of Bobbies new book (Bobbie Brownsâ€™ Dirty Rocker Boys: Love and Lust on the Sunset Strip), have any of you considered writing one of your own?

LL: I think about it, but it seems like a hell of a lot of work!

AK: I started writing one a few years ago, but my mind was in a bad place …I wanted it to be positive and have people learn from my mistakes, but that wasn’t where I was so I took a break until I was in a better place.

KG: Â Do you plan on touring?

KG: Â Who are your influences musically?

AK: Too hard to name all the musicians I admire, but as far as Rock & Roll goes…Van Halen all the way!

NS: Ketel One is my biggest influence! But guitar wise, Steve Vai, Marty Friedman, and the great Jason Becker, who is as inspiring in his rise above adversity now as he ever has been musically.

LL: HaHa Nita, I’m with you on that one…I’m all about old school David Lee Roth & Van Halen, but I love everything from Foo Fighters, to Muse, to Motley Crue!

KG: Â Lorraine, you’ve had success as both a solo artist and in television, what inspired you to resurrect the band?

LL: It’s all about nostalgia….being invited to play on the Monsters of Rock Cruise & finding the right group of girls is what’s made it all possible.

KG: Â Did you ever consider starting over with a totally different band name?

LL: Never! I had some fun with some side projects & I had a cover band called L.A.Nookie, I like that name, but I never wanted to start from scratch to build an original band. Femme Fatale is in my blood and that’s it!

KG: Â Athena and Lorraine, you both cowrote the theme song for Ex Wives of Rock with Athenasâ€™ son Miles. Â Will we get to hear the entire song on the 28th?

LL: It’s a great song! I’m not sure we will play it on the 28th, but Athena and I plan to release it on itunes.

KG: Â Nita, Â you and Courtney are members of the worlds only female Iron Maiden tribute band, how does playing in Femme Fatale differ from that project?

NS: Both bands are a blast! I guess the real difference is that playing in a tribute band, we have the added responsibility of recreating the show as closely as possible to the authentic experience. When we play with Femme, we can just be ourselves and play what we feel! And if it looks fun from the audience, imagine how much fun we’re having on stage!

KG: Â How would you describe your music?

LL: In your face, over the top energy and louder than…..F.

AK: A lot of energy, a lot of talent, and great boobs (bonus).

KG: Do you play all originals, covers, or both?

AK: Original, but we throw in 1 cover for fun!

KG: Â Any words for the naysayers that think chicks can’t rock as hard as the guys do?

AK: (laughing)…They haven’t met us yet!

NS: Not anymore. If they haven’t figured it out by now, they can go play in the dark.

LL: I invite you all to our show! Â Be prepared to rock your asses off with some of the hardest rockin’ chicks around!

Now that youâ€™ve met the women of Femme Fatale remember this:

In itâ€™s most literal sense a Femme Fatale is an irresistibly attractive woman cloaked in danger.Â  Hereâ€™s 5. Â Donâ€™t say you werenâ€™t warned. 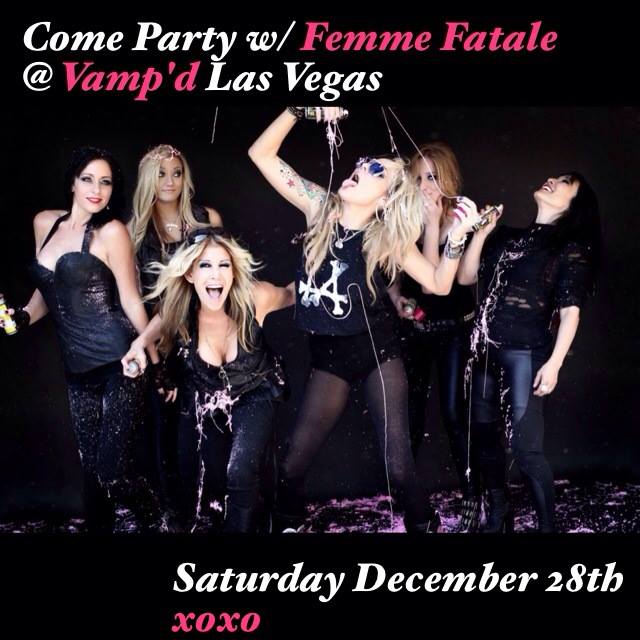