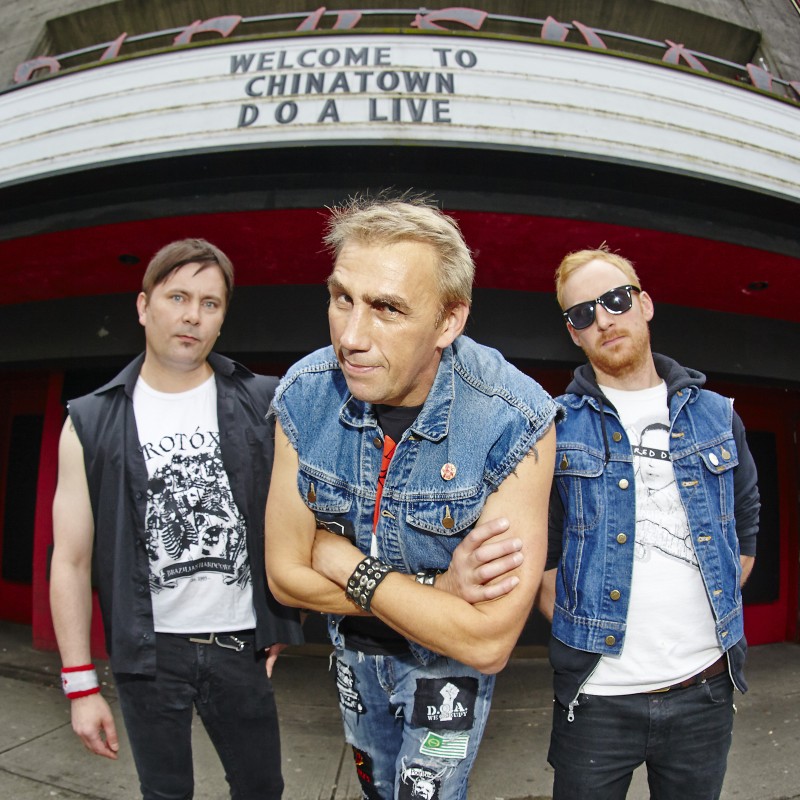 Legendary Punk bands D.O.A. and MDC play the Tonic Lounge this Friday night in Portland, Oregon sharing the stage with The Ransom and Mr. Plow. National Rock Reviewâ€™s William Riddle had an opportunity to catch up with author, actor, punk rock pioneer, and owner of Sudden Death Records, Joey Keithley a founding member of D.O.A., while on their farewell tour.

From 1978 to the present day, and run in’s with the Clash, front man of DOA, Keithley has proven the metal he’s made of delivering ‘in your face Punk’ with a message, “Talk-Action = 0”.Â It was an honor to have a few minutes out of his busy schedule to be able to talk with a living legend!

NRR: Joe, I’d like to take a moment out today to work with me on this interview, before the show coming this friday at the Tonic lounge in Portland, Oregon.

JK: Yep, should be an excellent show; we’re ready for it!

NRR: How many times do you recall playing with MDC in the past?

JK: Thatâ€™s a good question. Maybe a couple of times six or eight years ago, and then back in the old days maybe, I wanna say close to ten times like in San Francisco and back in Texas when they were the Stains and you know a few other places like when we were they did some tour dates with us so they’re old friends for sure.

NRR: This should be a really fun show for sure. I’m from Detroit, Michigan originally and recently relocated to Portland a few years ago. I was a little to young to go check you guys out when you came to town and played at City Club, but I have a few friends that went and they said it was an amazing show.

JK: Yeah, I remember City Club; it was a good show. It had that swimming pool underneath.

NRR: (Laughs) Yeah, yeah… It’s still there man and they actually continued to do a few more shows. For the most part, yours is still the most talked about from the old schoolers I know.

NRR: So, “Farewell”… This is going to be an interesting end of an era. 36 years… man, that’s some mileage.

JK: Yeah that’s a long time, that’s for sure. Ya know, We go out there. I mean I’ve been doing this for years. When you go to a place, you have to make sure you put everything in to a show. Because you never know when youre ever going to be back to a town again. With D.O.A. saying farewell, never say never. I’m not saying we won’t ever play again or anything like that right? But this is a farewell tour so you just gotta get up there and kick ass.

NRR: So, we have independent Music Hall of Fame inductee, solo material, film, press, politics, what could possibly be next for British Columbia’s most influential person?

JK: (laughs) Yeah, like I said, I’ve written a couple of books and they’ve done pretty well. I’ve been a part-time actor, I run Sudden Death Record label, I ran for politics four times I will try t do that again in 2017 when we have our next provincial election like you have with your state elections. The label’s going good and working on that very actively and I’ve been enjoying playing these show as they go by. Whats in the future? I don’t know.

JK: Yeah, I would like to do some recording with some other people and do some projects together and do something a little bit different. That might be fun.

JK: Oh, youâ€™re talking about Pete Seeger?, Yeah, That was horrible. He wasnâ€™t like a young man, but Pete Seeger was a big hero of mine. I got to do a show with him and got to meet him again after that some years later. That guy, I mean he stood up to things that were right, he wrote some great songs, he helped a lot of people with benefit shows, he revitalized folk music in America, he taught people how to play banjo through instructional videos, and there really wasn’t a lot more he could have done, so Heâ€™s a big role model of mine. If I could do like a quarter of what Pete Seger has done, Then I think Ill be doing pretty well.

NRR: Sure, Do you think you will follow in his foots steps in the tradition of activism through music? You have done some in the past, do you think this would be something continuing?

JK: Well, we set out with D.O.A. back in ’78, besides to have fun and create loud obnoxious punk rock, those were a couple goals of ours, [laughs] one of the other ones was trying to change the world to a better place, that hasn’t died and still is a big part of the band hence the slogan â€œTalk-Action = 0â€. Were trying to get people to think for themselves and try and take some control of their lives.

NRR: Excellent. Be your own boss. Think for yourself. Effect some positive change in the world. Talk-Action=0. Do you recall a time when being authentic as this is, has had its limitations? Sometimes honesty is not the best policy.

JK: Yeah sure, Some people are never that enthused about people voicing their opinions and thinking for themselves, so one of the things that I’ve tried to do with music, as other people have before and people will after me, is to embolden people and get them to question authority and do the right thing, ya know? The right, the wrong, do the right thing. These are key things in life, being part of a democracy like we’re lucky enough to live in… like in the United states and in Canada… were lucky to live in a couple of wonderful countries where people can express themselves, right? And that’s a fundamental thing that you have to protect, to get up and actively be involved and one of the reasons why I got actively involved in politics. I wanted to enable people to be more involved in it than they are because people are very disconnected because politicians claim that they’re going to tell the truth when the get into office and some of them do that and a whole bunch don’t. [laughs] This is the problem, right?

NRR: Being a leader and WOW! And legendary founder of a genre of music, PUNK!!! Its influenced generations in a good way, what would be your two-cents to an up and coming musicians that want to follow in your foot steps?

JK: Here’s the key and I’m glad you asked that: be original. I think that one of the things. A lot of the times, musicians… and it’s really tempting… you wanna play something that’s popular already or something that’s just become popular, so that they’re following a trend. But usually when that happens, and by the time you develop your craft to a point that its ready for the public to listen to and maybe buy CDâ€™s or downloads or whatever, that trend has moved on. But if your true to yourself, and you’re original and you just stick to that it, doesn’t matter if your trendy or not or on the breaking point of something new. But if you just work at your art, sooner or later, you going to accumulate a pretty good following and do well with it.

NRR: Here’s one I wanted to throw out there; this is one I always ask people I meet that are in to music or has been in the industry for a little while. Let’s say we jumped in the car and were going to grab a cup of coffee and I press eject on your CD player. What do you have playing right now?

JK: I think I got a comp I made of ZZ Top. [laughs] Ya know, I just love the rhythm playing and I’m a really, really big fan of Billy Gibbons guitar playing. He’s one of my top 5 most favorite guitarists.

NRR: Top 5 guitarists… Who is number one?

JK: Jimi Hendrix. His spirit, his stance… those were some interesting times. He’s a veteran and he stood up against the Vietnam war. Heâ€™s an activist. The other guy I think was super great from that era was Mohamed Ali.

NRR: Yes, I agree; he was my role model.

JK: He’s unbelievable. When we see popular athletes today, or celebrities, some of them do some great things. But a lot of the times, some of them are absorbed in award ceremonies, the latest bling, who they’re marrying, who they’re divorcing, you know what I mean? Mohamed Ali put his whole career on the line and went to jail because he wouldnâ€™t go serve and he became, like you say, a role model for an entire generation… black or white or Hispanic.

NRR: Here is one you donâ€™t have to answer yet, since they’re getting a lot of media attention globally and Nadezhadaâ€™s husband is from Toronto and all, but Pussy Riot…

JK: Yeah, yeah, some great stuff. Like the performances you’ve seen like in Sochi and at the church in Moscow, where they originally got arrested for the cathedral incident. I mean them singing to a tape, I mean that isnâ€™t overly enthralling, but it’s more like a political action, a message like standing up to a dictator like Vladimir Putin. I mean, that’s a tough thing to do ya know and they went to jail for a couple of years. I can’t say I know any of there songs or anything like that, but I’m familiar with them for creating a whole sensation for doing the right thing.

NRR: With the direction of some of the new punk, it’s hard for me… I’m 45… I’m into the good stuff, the original stuff. But when somebody younger than me comes out, they’re into punk… what are your thoughts on new punk and their approaches with music on social media as opposed to handing out records at a show?

JK: Yeah right… the social media one makes sense and everyone should try to employee that. It’s going to have a greater or lesser effect depending on the age of the people you’re trying to connect with obviously, right? The younger the audience, the greater the effect obviously. A lot of what kids perceive today as punk, I would put in the category of mall punk and it maybe loud, and have lots of riff and fast drumming, and the guys and girls in the band have crazy hair cuts and ripped up clothes, but there’s a lot of the bands involved in that kind of… you know… commercialized punk, mall punk, there’s not a lot being said. Doesn’t kinda have the same impact like that the Dead Kennedys, the Clash, Black Flag, Circle Jerks, D.O.A., The Avengers had on people right? So, having said that, there are those political punks out there but much smaller and in the under ground scene.

NRR: Thank you very much for your time Joe. Good luck with your political career and good luck to you on your tour in China and Australia and look forward to the show tomorrow night.

JK: Thanks! It Should be good.