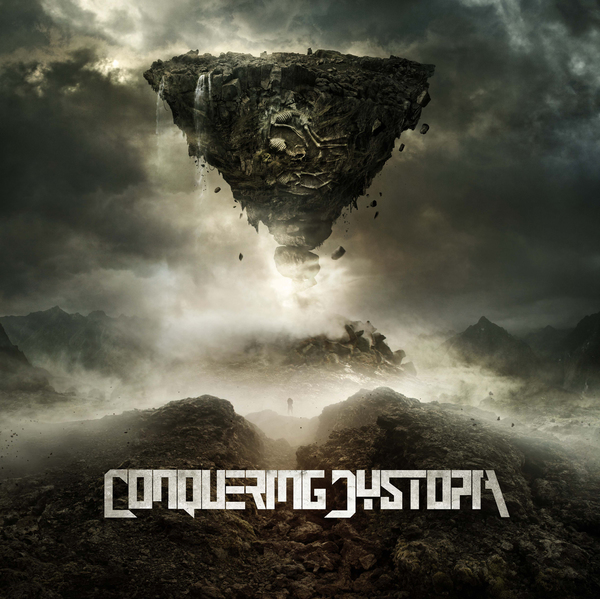 I believe the best way to describe the self-titled debut release from Conquering Dystopia is a quote from the movie Almost Famous. William says to the band, â€œAnd the guitar sound… is incendiary. Incendiary. Way to go.â€  Fitting as it conveys how fantastic this album is without falling into unnecessary cliches or uninspired hyperbole.

The music spoke to me. I listened again and again because itâ€™s that amazing. As the album is instrumental, there are no preconceived notions inferred from the lyrics and only a hint instigated by the title of the song.  I wonâ€™t be going into detail about all twelve tunes on this masterpiece though.  Iâ€™ll just cover some of my favorites.  Youâ€™ll be best served by exploring the rest on your own.

Conquering Dystopia is the offspring of guitarists Jeff Loomis (Nevermore) and Keith Merrow (see his awesome solo work, especially the tune Spice Dealer).  They crafted the music and then enlisted bassist Alex Webster (Cannibal Corpse), and drummer Alex Rudinger (The Faceless) to record these suites of wonderment.

First off, Prelude to Obliteration opens feeling ominous.  The song develops into a whirlwind and images of raging battles and triumph are brought to mind.

The track,Tethys, titled after an ancient Greek goddess of the sea, the embodiment of the waters of the world, was perfectly suited to this song.   This concept helped to create a portrait of a sometimes chaotic, other times tranquil, voyage across the sea or through space and time.

Running only two minutes in length, Doomsday Clock is haunting.  Maybe it could be the Franklin D. Roosevelt speech from 1936 in the background?  The eve of the nuclear age seems to be signaled by the sustained notes over the arpeggio and chord progression.  Itâ€™s certainly thought provoking and dark.

With the song, Totalitarian Sphere, thereâ€™s a distinct â€˜spy movieâ€™ quality to it.  The rhythm creates suspense and the melodic phrases create visions of clandestine affairs.

Another favorite, Lachrymose, meaning â€œtearful or given to weepingâ€, is just an intense and beautiful song.  You can honestly hear the guitar sigh.  Personally, I didnâ€™t feel the song was alluding to tears of sadness though.  For me, it was the tears of effort and a rewarding feeling of elation.  But, thatâ€™s the beauty of music, itâ€™s open you individual interpretation.

Finally, the brief interlude of Resurrection in Black followed by the epic Destroyer of Dreams, sent my mind into the world of Stephen R. Donaldsonâ€™s The Chronicles of Thomas Covenant. The music is devastating in performance; giving you at one moment the quiet of sleep and the next bloody rage.

To me, Conquering Dystopia is a perfect example of how the metal music genre is a natural extension of classical music.  This album tells stories and paints pictures in the mind, with only the music to guide you.  Enjoy it.