When your favorite artist goes outside the normal shows, you can get some really special moments. Bobby spoke about that and a few other topics.

This interview took place a few days before the show at Joe’s Walnut Bar and Grill in Petersburg, MI on Feb 20, 2015. As you can tell from the photos and video, it truly was a great show. Not only was it an acoustical show, but it had an organic feel in that it was planned to have been in a completely different city only days before. In just four days, they booked the new venue and to promoted the show in sleepy little Petersburg. It was a cozy space for the bands to play and the sound was better than anticipated.

The atmosphere was casual, as if drinking with friends and playing an old six string. The opening bands, Breaking Grace and Last Call, were great local choices to warm up the crowd that kept growing to near full capacity. VIP’s were treated to up close and personal seating, right in front of the action. There were sit-in’s with both Bobby Amaru and Kevin Martin as they performed their sets.

As Amaru played, his mood was relaxed and even did some wonderfully fan-friendly interactions while playing. While his cover of “Freebird” ended too soon for some in the crowd, others believed his cover of Brittany Spears might have gone too long.

Amaru’s set, stage presence, and genuine feel of having fun made the night very enjoyable and a pleasure for all in attendance. If you are a fan of Saliva, this show is highly recommended for the experience. Make sure to show your appreciation with applause and lots and lots of Crown Royal shots sent to the stage.

Without further stalling, National Rock Review presents the interview with Bobby Amaru. If you were at any of the four shows, or have an opinion about the interview, we’d love to see your comments below. 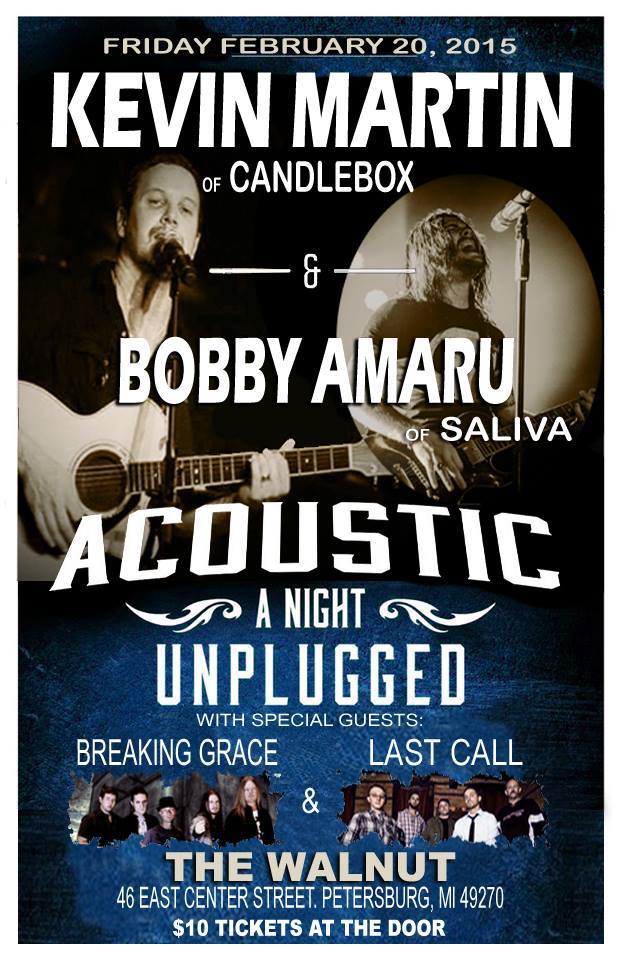 NRR: Tell me how the acoustical set, the four shows in Michigan, how did that all come about?
Bobby Amaru: We decided, man, let’s go to the coldest part of the country, you know, in February (laughing). Actually, I… there was a promoter up there that I kind of talked with about doing some acoustic shows and I was going to do some. And it came down to, what if, you know, we got somebody else to kind of be with you? I called Kevin [Martin] and I asked if he wanted to do it and was open for it. He said yeah. I met him, I met him years ago when Candlebox played in Jacksonville, [but] I never really hung out with him until Saliva did a bunch of shows with them a couple of years back. Super cool guy, man, we just kept in touch and stuff. He’s got a great voice. I think he should do more stuff like this, more acoustic stuff. There’s like no other person I can think of that can be better on this than him. I’m stoked.
NRR: I have to ask how is Wayne doing? Is he coming along pretty good?
Bobby Amaru: Wayne is doing great. Yeah, he’s doing a lot better, man. We had to cancel our February run. Which kinda sucks, because we don’t like doing that, man. The doctors just wanted him stay out a little longer. We didn’t go, you know, a lot of those shows were New York, up north and stuff. Man, we didn’t really want, if he had pneumonia really bad, we didn’t want him to be in the cold too much. So, we just canceled the shows. And [we] decided that we would, ah, we would make them in a more warm temperature time of year (laughing).
NRR: The reason I ask, and it’s not to make light, it does sound like he had pneumonia pretty bad. But if you were…
Bobby Amaru: Oh, yeah. He already has bad lungs. His lungs, he’s got asthma already.
NRR: I was going to ask if it was almost a silver lining, I guess, to do the acoustical shows as a change of pace?
Bobby Amaru: Yeah, I’ve been doing some acoustic runs and stuff when we’re off. I don’t like to stop, man. I like to keep going and stuff. These guys wanted to take a break and I’m okay with that. I love breaks don’t get me wrong. It gives me a chance to set some acoustical stuff up. With these shows, we just wanted to do four. It wasn’t like, hey let’s go do ten shows in a row and drive in the snow. It was more like, let’s just do four and let’s stick to one market. Michigan is really good, man. They support rock. They’ve always supported Candlebox and Saliva. So, I think it’s a great market to start in. I think we’ll end up doing more. But for now we’re going to do this. But, yeah, I mean I kind of had the idea to do it once the thing with Wayne happened.
But also at the same time, they’re all going to be here. I get back Monday and they’ll already be here. We’re going to be working on a new record. So, we’re going to be working on a new record for the next two and a half weeks until we fly to Mexico City to do a show.
NRR: Is there any other hints about it you tell me about or is it too early to really say much about it?
Bobby Amaru: The record? Well, yeah. We’re kinda at the beginning stages, man. We’ve all been writing and stuff and laying down ideas. We’ll all just get in a room and kind of, we’ll three or four days to kind of hash out ideas of songs that we’ve been working on. We’ll go from there and starting, you know, laying down stuff and cutting ideas. We’ll probably have a single out in May. We should have it done in April.
NRR: Cool. With the acoustic stuff, is it all original songs that you’ve done up over time and you’re finally getting to play? Or will you slip a Saliva song in there?

Bobby Amaru: Yeah, they’ll be a few. There will be a little bit of everything, man. Like some of my stuff, I’ll do, a few Saliva and a few covers and that. And Kevin will get up and do his thing. I think it’s going to be fun. Four shows for everybody now, I’m excited to do them. It’s always fun to switch up.
NRR: Is there enough material that if you got around to it, you could release a solo album of just your acoustical songs?
Bobby Amaru: Oh, yeah man. I’ve been recording songs for years, dude. I’ve got over a hundred songs in a catalog, man, just laying around.
NRR: What are you looking forward to most with the outing with Kevin? Is it just to go back into the Paradise that is Michigan in winter? Or is it just because you like to stay busy and just have some fun?
Bobby Amaru: I don’t take it so seriously with something like this. It’s just fun and a different side with the fans and people. If you want to see it, to come out and enjoy it. I’m more stoked about just watching Kevin play, so (laughing).
NRR: Okay. How long have been doing music? I know you joined Saliva in what, 2012?
Bobby Amaru: Yeah, I’ve been doing a long time, man, ever since I was a little kid. I grew up in music. My dad was in bands. My grand dad was a singer. So, it’s kind of, one of those things, man. I was raised on it.
NRR: Perfect, since you’ve doing it for such a long time, one of my favorite questions is, do you have a moment that’s just surreal or every time you think about it you just can’t help but laugh? Is there a, I guess, a Spinal Tap like moment that you can think of that you’d be okay with sharing?
Bobby Amaru: Yeah, I mean there’s been moments. We used to open up with a song, “Ladies and Gentleman” a lot. And I would actually use a bull, like a megaphone. What they would do [the band] because that was the first thing I would grab and I would never turn it on until I was about to sing the part of the first verse. There was a setting on there with a button you could press and it would make like a police siren noise. And it was literally, it was just so loud. So, there was times that they would like, I would go and turn the thing on and that was already there. Instead of hearing my voice through the mic, you’d just hear [a] loud siren going off. And there was actually one time too where, they would do it where they tried to get me again. I wouldn’t use the bull horn until another part of the song. So, I would turn it off and then sit it down. Someone would run up and try to press it again and I wouldn’t know. One time, they taped it. They taped it down to where I couldn’t just like, you know (laughing), it was a lot more difficult. I had to literally untape it at that point. Yeah, there’s things… there’s all kinds of crazy things they’ve done.
NRR: Out of all the guys, who is the biggest practical joker?
Bobby Amaru: That’s our drummer, Paul Crosby. Yeah, he’s a prankster. It’s always his idea. Everything is always his idea.
NRR: With Wayne feeling better, when do you guys plan to resume tour that you unfortunately had to cancel some of the shows with, do you know yet?
Bobby Amaru: They’re working on some other dates at the moment. I mean, unfortunately what happens when you do that you have an itinerary of a lot of other shows spread out. We have to kind of figure out when we can make them up. You know, obviously, we’re not going to be able to make them up in order. It’ll be a situation, when we’re near the area again, we’ll make the shows up.