On October 9-10, 2015, Cadillac, Michigan celebrated the 40th Anniversary of the KISS Homecoming at Cadillac High School with a number of community activities.

Cadillac High School in Cadillac, Michigan made rock nâ€™ roll history when the flamboyant rock band KISS played at their homecoming in October of 1975. According to â€œThe Story Starts Hereâ€ article by Jim Neff, the Cadillac High School Vikings football team finished undefeated in 1973 with a perfect 9-0 record. The Vikings, unfortunately, lost the first two games of the following 1974 season.

As one of the coaches, Neff knew that the team was talented, but the pressure of living up to the accomplishments of the previous year was causing them to play below their abilities. The coaches were looking for something to lighten the mood and playing rock music in the locker room beforehand was suggested. Head coach Dave Brines gave Neff the task of picking the music. He chose KISS, a new and outrageous band at the time. They were wild, bold and loud, plus, Neff says, their name invoked an old football credo; Keep It Simple Stupid. Neff says it was a match that was meant to be.

With KISS as their inspiration, the 1974 team went from worst to first by winning its final seven games, eventually becoming conference co-champs for that season. The band heard about the comeback and, says Neff, adopted the Vikings as their team.

On October 9th, 1975, KISS came to Cadillac High School to connect with their football team and played a homecoming concert in the high school gym. KISS arrived at a football field full of people with their faces painted in KISS inspired make-up. The band signed autographs, took pictures, and then played their concert in the school gym.

The next morning, the band received the key to the city while having breakfast with city council members and the mayor who also wore full KISS make-up during the meal. The guys in KISS rode through downtown Cadillac on the renamed “Kiss Boulevard” for the homecoming parade. Right before the game, KISS flew away using a helicopter that made a surprise landing on the 50-yard line of the football field. As they rocketed away, they showered the fans with flyers that read â€œCadillac High, KISS loves you!â€ Itâ€™s an event that has become a cornerstone of KISStory and a legendary event in the world of rock music, which people still talk about 40 years later.

On October 9-10, 2015, the small Northern Michigan community of Cadillac celebrated the 40th Anniversary of the KISS Homecoming at Cadillac High School. This yearâ€™s homecoming coincided with the 120th Anniversary of Cadillac Viking football. The Cadillac community put together a slew of events that included the homecoming football game and KISS-themed additions to their homecoming parade. Walking tours of KISStorical markers at significant spots around town, encouraged visitors to learn the history. The city unveiled the permanent black granite monument to commemorate the iconic 1975 event next to the football field. To cap the event, the KISS tribute band, Mr. Speed, played a re-creation of the original concert in the high school gymnasium. 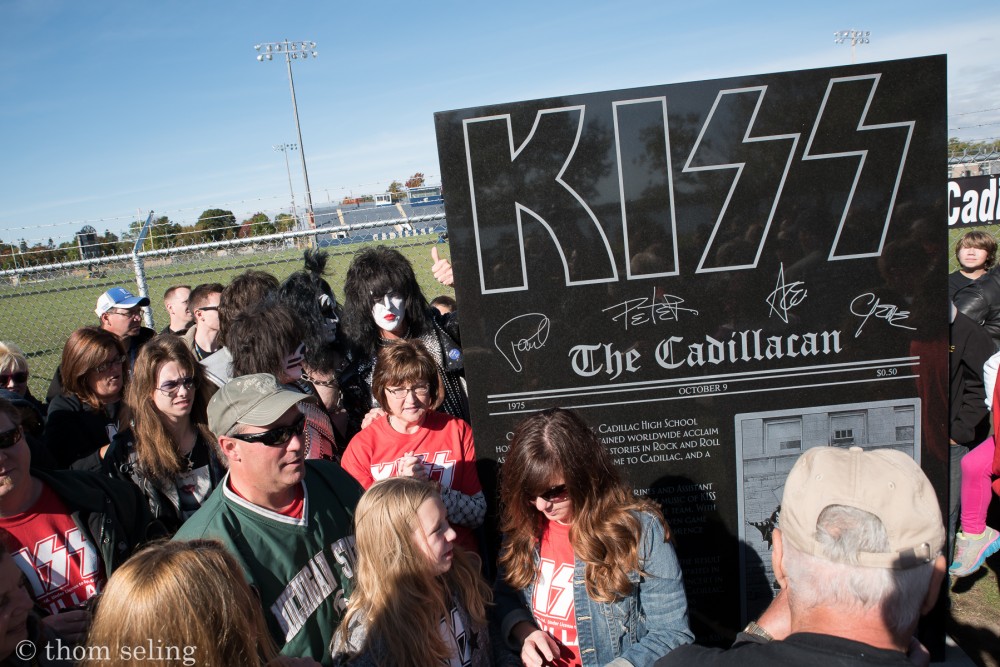 Fans from states such as Illinois, Indiana, Oklahoma, and California attended the event. The people of Cadillac were warm and welcoming, providing a friendly atmosphere making one feel a part of their community.

Our photographer, Thom Seling, was on-hand for the festivities on Saturday, October 10, 2015. The day started out with a speech from Mayor Carla Filkins and Coach Neff followed by the unveiling of the monument dedicated to the band.

Our photographer met Tina Nemeth-Nowland and Brenda Marsh-Smock, both who were flag girls who took part in the 1975 homecoming. The women told a story of how Paul Stanley grabbed their flags as they walked alongside the limo during the parade. KISS invited them to a party afterward, but there was no way their parents would allow it since they were only 15 years old at the time.

Next to them was Dave Schemel from the Class of â€™77. He told a story of how he was a running back on the football team who scored the winning touchdown during the homecoming game. Schemel said there was a debate going back and forth on who actually scored it. Alas, there were no films available of the game; thus the controversy. â€œBut, it was me!â€ Schemel said.

Following the monument dedication was Mr. Speedâ€™s performance at the high school for close to 1,000 attendees of all ages. At one point, they had to open the windows for fear of setting off the fire alarm. The concern was due to the use of fog machines. Coincidentally, according to some in attendance, the windows were opened during the original concert due to the use of pyrotechnics.

According to their official bio, Mr. Speed has been playing together for over 20 years. In 2012, they battled against over 200 KISS tribute bands from all over the world. In the end, they were crowned The Best KISS Tribute Band in the World at the Hard Rock Casino in Las Vegas. None other than Tommy Thayer of KISS presented the award.

Mr. Speed is Rich Kosak as â€œThe Starchildâ€ (Paul Stanley), Joe Hess as â€œThe Spacemanâ€ (Ace Frehley), Alex Lords as â€œThe Demonâ€ (Gene Simmons), and Andrew Sgambati as â€œThe Catmanâ€ (Peter Criss). The guys of Mr. Speed had their KISS counterpart mannerisms down so well, they transported the crowd back to the original event.

During the concert, Kosak mentioned they were the only tribute band ever to reach out to Coach Neff about the Cadillac history. 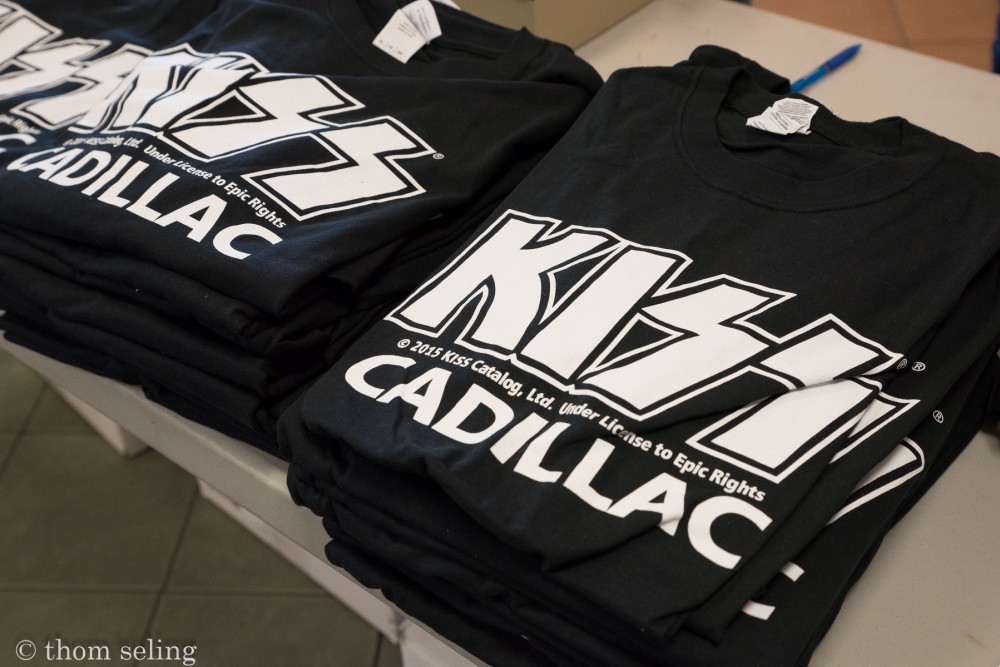 KISS was unable to attend the 40th-anniversary due to touring commitments. However, they sent a video tribute to be shown during the event. They also inked a licensing agreement with the Cadillac Area Visitors Bureau to print up 2,000 t-shirts that read â€œKISS Cadillacâ€ on the front with â€œ1975-2015 kisscadillac.comâ€ on the sleeve. The agreement stipulated that the shirts could not be sold online or at a retail establishment. Ticket holders could purchase the shirts at the event and the Cadillac Area Visitors Bureau. All proceeds go to the KISS Cadillac Monument Fund (a charity).

The KISSâ€™ 1975 visit left a permanent impression on the small town of Cadillac. It is widely acknowledged as one of the greatest rock nâ€™ roll publicity events in history, although the publicity came primarily after the concert.

If you were there for the original event, you were one of the few hundred lucky ones. The same holds true for this 40th Anniversary celebration. People will be talking about the anniversary event years from now just as they do the original. One thing is certain; KISS, Cadillac loves you!

Here are Thom Selingâ€™s images from the 40th Anniversary celebration.