Spring of 2017 debuted the first Las Rageous music festival in the heart of downtown Las Vegas to an overwhelming success and this year’s incantation is set to be nothing short of rock ecstasy.  Mark your calendars for Friday, April 20th and Saturday, April 21st because this show is not to be missed. 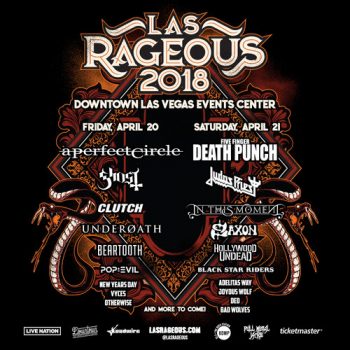 Live Nation has also partnered with local rock station KOMP 92.3 and Smash Magazine to host a contest for local bands to battle for an opening spot in the festival.  The contest dubbed, “Battle of the Fans,” will be held on March 9th and March 10th and the finals will take place on March 24th at Hard Rock Live on the Las Vegas Strip.

Las Rageous will be held at the Downtown Las Vegas Events Center. It is an all ages event with doors opening at 4 pm and headliners scheduled around 10 pm.  Tickets for general admission will run you $127 (plus fees) and are still available, but with only 10,000 up for grabs don’t wait!