The Marmozets make their third appearance in the North East of England inside of 12 months in support of their new album Knowing What You Know Now.

For tonight’s sold out show the West Yorkshire based five-piece make a welcome return to Tyneside. Upon arrival at the Riverside Newcastle, the band’s loyal fan base brave the elements forming a lengthy queue which spirals its way along the cobblestone pathway running parallel to the River Tyne.

By the time opening band Queen Zee (formerly Queen Zee and the Sasstones) confidently stride out onto the Riverside stage the room is packed to the proverbial rafters; a testament to just how strong this touring packing truly is. The group has been on the road with the Marmozets on and off throughout their recent UK run, and have been making waves in the process.

Queen Zee’s explosive brand of high energy punk/garage rock makes an immediate impact as they blast through a ferocious rendition of “Victim Age”. With tracks like the frantic, fuzz fuelled “Sissy Fits” the group evokes images of early Nirvana. 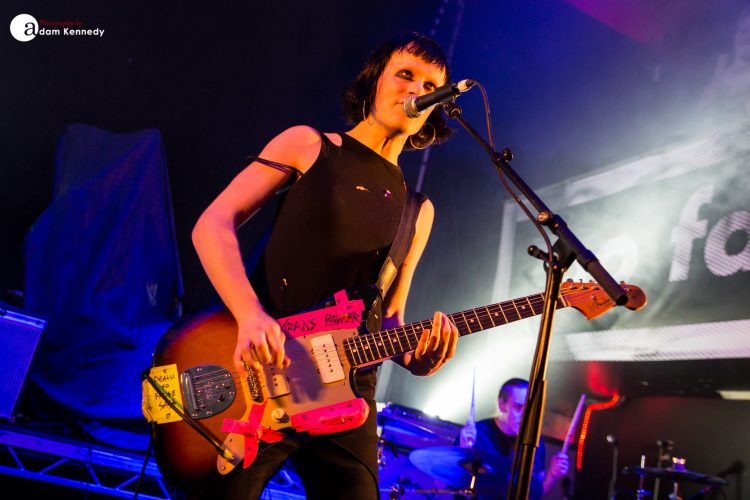 Lyrically the group bring to the forefront issues surrounding the LGBT+ community. With the band’s lively number “Boy” Queen Zee celebrates the transgender community, on the other hand, “Fly The Pink Flag”, which is one of the heaviest songs in the band’s set, grapples with homophobia and transphobia. Delivering a rather poignant speech prior to the latter Zee discusses these important issues and informs the audience that the number was written in the wake of 2016’s Orlando nightclub massacre.

Throughout the course of their short but sweet set, the Liverpool based five-piece DIY outfit certainly pack a punch and are undoubtedly one of the best new bands to hit our radar so far in 2018. Queen Zee leaves the Newcastle faithful more than warmed up on a cold February night.

As the Marmozets explode onto the stage like a vortex of energy, they waste no time at all in showcasing their latest offering with both “New Religion” and “Habits” opening the show. This, in turn, sets the tone for the night ahead.

By the time the band launch into their third song “Is It Horrible” crowd surfers mobilize themselves towards the front of the stage. The fans inside the Riverside Newcastle are lively, to say the least.

Tonight the Marmozets deliver the lion’s share of their new album, with ten of the twelve tracks featuring in their set. Propelled on by the likes of the anthemic “Play”, “Meant To Be” and “Lost In Translation” the band’s high energy performance does not subside at any point.

Despite the onus on their new album, there is plenty of room for old favourites and crowd pleasers from the Marmozet’s debut record. This includes the likes of the hard rocking “Move, Shake, Hide”, “Particle” and “Why Do You Hate Me”. The latter of which results in a circle pit forming in the centre of the room.

With a no messing approach to their live shows, The Marmozets play straight through their seventeen song set without an encore. The band brings the show to a close with a high octane rendition of “Major System Error” and “Captivate You”; the group’s fans hang on every word.

With Knowing What You Know Now there are no signs of second album slump. The Marmozets are most certainly back with a vengeance and are on the top of their game.