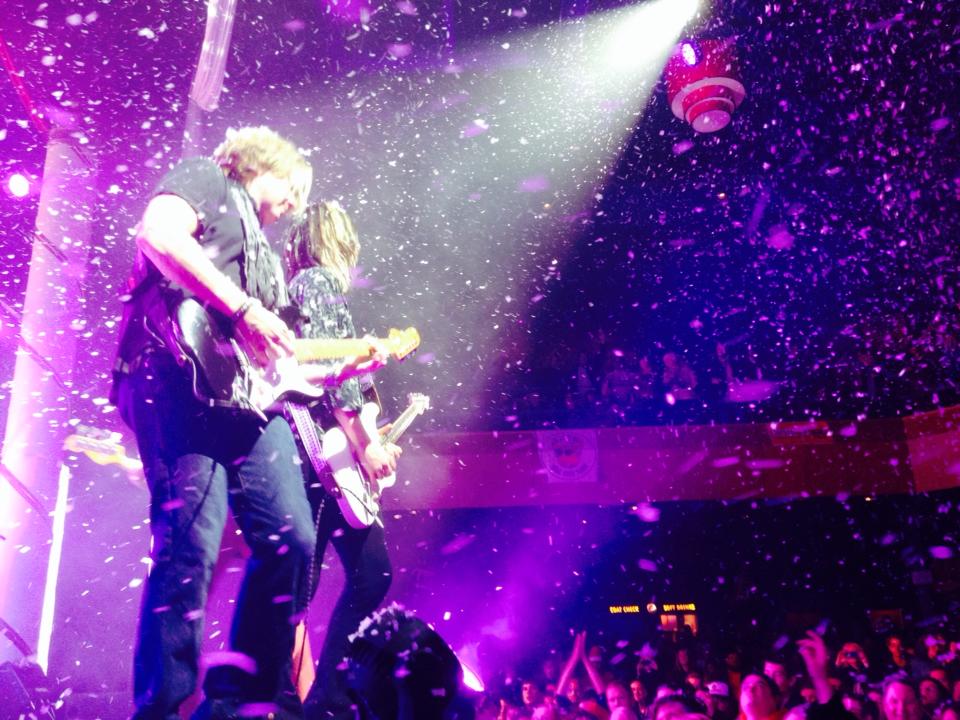 El Monstero captivated the stage with a rock n roll extravaganza, a monster show depicting of their name.

The band played at the Pageant in St. Louis, Missouri on December 23rd, 2013. El Monstero is a Pink Floyd tribute band made of various accomplished Saint Louis bands. It was not just a show; it is a visual experience. This experience has become a Saint Louis tradition during the Christmas Holidays. It is now the fifteenth year of production. The band takes a week or more of consecutive night shows at the Pageant, including a night for charity.

Be sure you check out Colleen Oneil’s amazing collection of photos from the show.

Fans packed the venue from wall to wall and ceiling to floor. Pink Floyd Tribute is only a small way to describe the bandâ€™s performance on stage. This is not your run-of-the-mill, ho-hum tribute. El Monstero is a pageantry of performers, a circus of music. All of the band members enjoyed themselves on the stage and each was enjoying the work.

When I was a child, my neighborhood friends would get together and we would reenact the Pink Floyd The Wall album, so I was very familiar with each song. The band did a splendid rendition of every song off the album and created an exceptional scene of every part. Bassist Kevin Gagnepain founded El Monstero in 1999 and the idea has grown ever since into a monster of rock. They also performed the complete The Dark Side of the Moon album along with many parts of album Wish you Were Here. The band gave a wonderful encore starting with Fearless, and Comfortably Numb. The finale of the show consisted of Griffin and Greene, screaming out the solos, while fake snow pummeled the audience as the solos created a blizzard of sound.

The vocalist Mark Thomas Quinn explicitly played the role of Pink. He brought fear to the audience in his black leather jackboots, wielding his whip of inquisition, demanding the concertgoers to line up against the wall as they were the riff-raff of the room. Meanwhile, Jimmy Griffin (Vocals and Guitars) was excellent on vocals. Griffin, also an accomplished guitarist, banged out Dave Gilmouresqe riffs along with his co-guitarist Bryan Greene. These musicians traded off on the Gilmour parts and summoned the ultimate Floyd sound. It was wonderful watching these two and hearing their twin guitar attack.Â The remaining members of the band consists of Kevin Gagnepain on bass, John Pessoni on drums, and the Â keyboard ensemble of Bill Reiter of The Urge and Jake Elking.

Not only did they nail the music, there was a full cast of performers along with the show. The highlights of the show were the acrobats and the background vocalists. The acrobats, dressed in Floyd garb, suspended themselves from the 50-foot ceiling with chains and beautiful purple light bathed strips of satin. Each move drew a breath from the audience for fear that the performer would pummel to their death. As Pink Floyd is well-known for their use of soul singers, El Monstero featured aÂ trio of singers; Ermine Cannon, Tandra Williams, and Mindy Mierek. These three performed like a Neapolitan Ice cream cake of Soul; each vocalist did a wonderful rendition of â€œThe Great Gig in the Skyâ€, bringing to the table a delicious and gripping palette of deep-hearted soul.

Having never attended any of these shows, I thoroughly enjoyed theÂ whole extravaganza and will return next year and even bring my family. Saint Louis is known well for its musicians and El Monstero is perfect evidence. I hope that this act can get on tour and bring this road show with them. Currently, the band is a local St. Louis saucerful of secrets, but they should be sharing their smorgasbord of sound with all on a nationwide tour.