It’s been over 20 years since the rock act Fuel formed in Tennessee, but that doesn’t mean that they are above playing small club shows.

In fact, on September 27, Fuel is going to be doing just that. Â The event is called “Big Band, Small Bar” and it promises to be quite the experience. Â Fans in Detroit can see these rock staples at US 12 Bar and Grill alongside American Idol’s Paul Jolley and Detroit natives Critical Bill for a night sure to be full of rock and a chanceÂ to see this arena band in a small setting. Â While classics like “Shimmer,” “Bad Day,” and “Hemorrhage” are sure to be heard, songs from Fuel’s latest albumÂ Puppet Strings will be cranked up to 11. 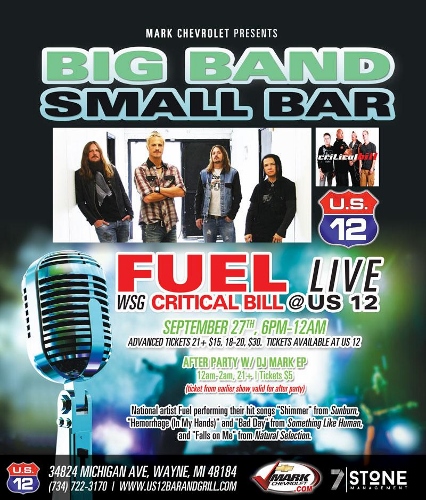 Doors for the show open at 6 pm and the concert will last until midnight, upon which the after party will start and run until 2 am.