Judge laid down the law and the Cro-Mags left it all on the stage at the TNT Fest 2014 for an end of summer party, a much needed release for local headbangers.

Judge took the stage to a beautiful disaster of controlled chaos in the shoulder to shoulder crowd packed in near the stage. Judge was originally formed in 1987 with ex-Youth of Today members John “Porcell” Porcelly and Mike “Judge” Ferraro. They released their first EP in 1988 titled New York Crew and parted ways in 1991 after their 1990 release There Will Be Quiet. Judge released What It Meant – The Complete Discograply in 2005 and reunited in 2013 playing two sold out shows in New York City, with more dates across Europe and the US in 2014.

Hardcore/metal band icons from New York, The Cro-Mags, focused on their first album The Age Of Quarrel, originally released in 1986 and recently re-released on 180 gram vinyl by Brass City Boss Sounds.

Singer/front-man John Joseph did not stand still the entire set which consisted of “World Peace,” “Show You No Mercy,” “Malfunction,” “Crush The Demoniac,” “Street Justice,” “Seekers Of The Trust,” “Signs Of The Times,” “Right Brigade,” “Attitude, Intro” (tribute to Leeway and the Bad Brains), “It’s The Limit,” “Life Of My Own,” “Don’t Tread On Me,” “We Gotta Know,” and “Hard Times.”

Joseph recalled stories about growing up on the streets of New York and how music saved his life. He said music gave him focus and direction. He also went on to say that he has written a book, Meat Is For Pussies published in 2010, and has other things in the works that would not have been possible without his connection to music, PMA (Positive Mental Attitude) toward life, and confronting his inner demons without fear. 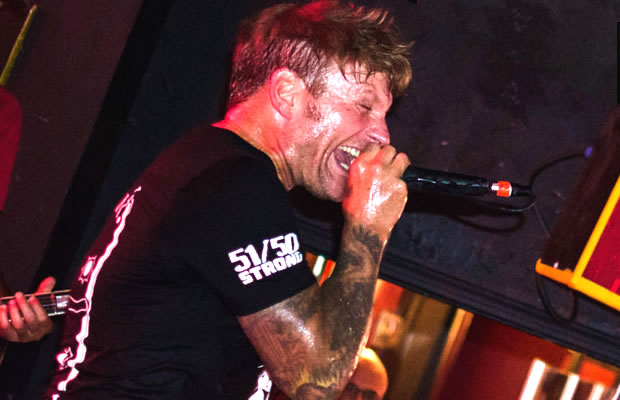 Wisdom In Chains, formed in 2001, is a hardcore band that hails from Stroudsburg, PA, releasing their self titled album Wisdom In Chains in 2002. Their latest EP, We Never Sleep, released in 2014 is a preview of their upcoming LP featuring two new songs and two Product Of Waste covers in honor of Terry “T-Pow” Iovino who died suddenly in September 2013. Wisdom In Chains got the crowd going with a brutal hardcore set including “We’re Not Helping,” “Dragging Me Down,” “Peace To My Family,” “When We Were Young,” “My Promise,” “Land of Kings,” “Early Grave,” “Fighting In The Streets,” and “Chasing The Dragon.”

Bad Co. Project made their U.S. dÃ©but at TNT Fest 2014 after touring across Japan and Europe for the last few years. Bad Co. Project was started by ex-Oxymoron front-man Sucker in Berlin, Germany in 2006. Sucker, along with Andy the drummer for Mad Sin, recorded Sucker Stories in 2006 followed by Mission Mohawk in 2011. Their set included “From The Ashes,” “Mission Mohawk,” “All U Kids,” “10 Years On,” “Crisis Identity,” “Can’t Keep Us Silent,” “Raise Your Voice,” “Bored & Violent,” “Crossfire,” “Cure & Curse,” “Kids Of The Nation,” and “D.E.G.”

Patriot formed in 1990 in North Carolina. After many member changes, breakups, and hiatus from 2000 to 2012, they are back doing what they do best: playing street punk. Their set included “One Shit One Kill,” “Chewing Glass,” “Bare Knuckle Pete,” “The Morning After,” “RSVP,” “My Own Worst Enemy,” “Crime Of The Times,” “Best Of Friends,” “Cohesion, and “Songs For The Youth.”

Lenny Lashley, former front-man of Darkbuster, formed Lenny Lashley’s Gang of One in Boston in 2010. Lenny Lashley’ Gang of One released Illuminator in 2013 including songs reflecting upon healing and days gone past. Lenny’s latest music is reminiscent of Joe Strummer’s days after the Clash.

The Traditionals returned to TNT Fest bringing their high energy, iron city working-class street punk to the eager Hartford crowd. The Traditionals formed in 1997, hailing from Pittsburgh, PA and are working on a new album to follow-up their 2011 release, Steel Town Anthems. Their set included “Propaganda Games,” “Seems So Far Away,” “At The Bottom,” “Adult In A Youth Cult,” “Generation Of Today,” “Not Another,” “Problem With Authority,” “Unit-ed,” “Violence,” “Sold Us Down The River,” “Dead Society,” “Liberty, and Ready to Fight.”

Hard Evidence (‘ard ev), made their TNT dÃ©but supporting their 2014 release Last One Standing. Hard Evidence formed in 2013 and are based in St. Louis. They carry the sound like a seasoned touring band. Their set was non-stop streetpunk/Oi, including “Forgotten,” “Long Days,” “Criminals & Outcasts,” “Bled Dry,” “Spoiled Rotten,” “Rising Sun,” and “Last One Standing.”

Panzer Bastard opened the night with a blitzkrieg of hard and heavy songs sounding like MotÃ¶rhead meets Venom. Panzer Bastard formed in Boston in 2006, or 200666 as they like to say. They have been a growing crowd favorite while supporting bands like Slaphot, Stars & Stripes, and Murphy’s Law.

The weekend long annual TNT Fest 2014 was held at the Webster in Hartford, CT and was hosted by Brass City Boss Sounds (BCBS), a production company, booking agency, and record label based in Connecticut.

A big thank you goes out to all the friends who we call our extended family, bands, venues, and promoters that keep the New England rock, punk, hardcore, metal, and everything in between music scene alive. See you next year at TNT.