Returning to Mid-Michigan for another sold-out show, the legendary rock band came to entertain the masses on a wintery spring night.

For the first time since 2012, StyxÂ arrived back at the Soaring Eagle Casino And Resort to perform a night of greatest hits to a standing room only crowd.Â Seats sold out months in advance. For the 1600+ people in attendance, each one knew the importance of the ticket they were holding as fans congregated outside the venue hoping to find an extra ticket or get a glimpse of the show from the front entrance.

As the band entered the stage and the lights lifted the darkness, the crowd also rose from their seats to the opening of “The Grand Illusion.” Fans danced at their seats and in the aisles, the crowd quickly joined Lawrence in the singing while Tommy, James, and Ricky played their guitars and traveled the stage side to side visiting with the crowd packed at the edge of the stage.

Tommy welcomed the crowd and thanked them all for coming out to the show and supporting the band for the past four and a half decades. He claimed that if the crowds didn’t show up, he would have “Too Much Time On My Hands.” Â The audience,Â still standing and singing, joined Tommy and James in clapping their hands to parts of the song.

Next, when Lawrence started playing his piano, the crowd instantly recognized the notes and cheered as he began serenading the first verse to “Lady.” The crowd sang along and lighters waved in the air as they swayed back and forth to the rhythm of the music. Â  As the tempo picked back up, Tommy, James, and Ricky joined forces at center stage playing their guitars and throwing guitar picks out into the crowd while smiling and posing for photos. Â Lawrence, on his spinning piano, often turned around playing the piano backwards.

Although the band came together in the early 1970s, it wasn’t until 1977 that Styx made a name for themselves. They were the first band to score up four consecutive triple platinum albums in a row starting with The Grand IllusionÂ in 1977 running through to Paradise TheatreÂ in 1981.

Their 2016 tour is following their current double disk release,Â Regeneration Volumes I & II, a collection of 13 Styx classics that also includes a new song and one from Tommy’s days with Damn Yankees. Most of the classics came during the period of those four significant albums. 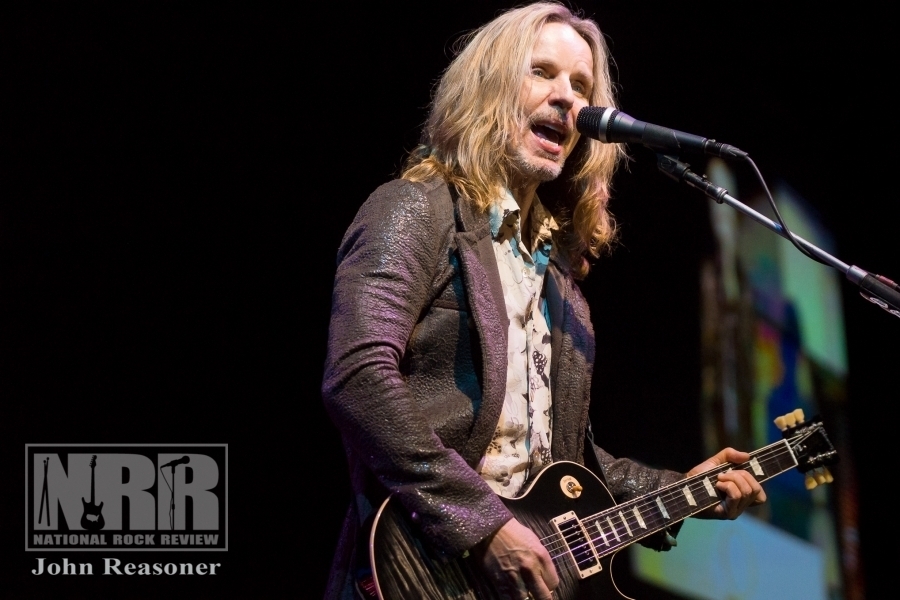 James jokes with the crowd saying they were the most popular when Michigan’s own Gerald R. Ford was President of the United States. He also spoke of the first lady, Betty Ford, and joked that we all know why we know her, referring to the drug and alcohol rehabilitation clinic she founded. He then spoke how doctors once told him he needed to change life direction as his partying was killing off what liver he had remaining.

He continued saying that he knows everyone in Michigan has a cell phone and asked them to get their them out and “Light Up.” At the conclusion of the song, Tommy asked the crowd “What did we do before cell phones?” as he held his hand up and gestured saying “we couldn’t hold up pay phones.” The crowd responded back to him with “Lighters.” He explains that while he loves the sea of cell phone lights, had they existed back in the day, he never would have written the next song, “Man In The Wilderness.”

Showing their respects to the recently deceased David Bowie, Tommy with his acoustic guitar played “Space Oddity” and had the crowd sing back to him.

Lawrence told fans of how he, 15 years earlier on that very stage, was able to watch two legends play; Chuck Berry and Little Richard. He feels to this day that Little Richard taught him so much that he wanted to play tribute by playing “Good Golly Miss Molly.”

In 1981, James wrote a song for the Paradise TheatreÂ album that sparked much controversy and had changed the marketing of music ever since. Religious activists accusedÂ Styx of embedding hidden Satanic phrases inÂ “SnowBlind.”Â James pronounced to everyone in attendance, in a low devilish voice, that “this song contains no backwards Satanic messages.” The crowd roared in approval as James started the song in his strong baritone. 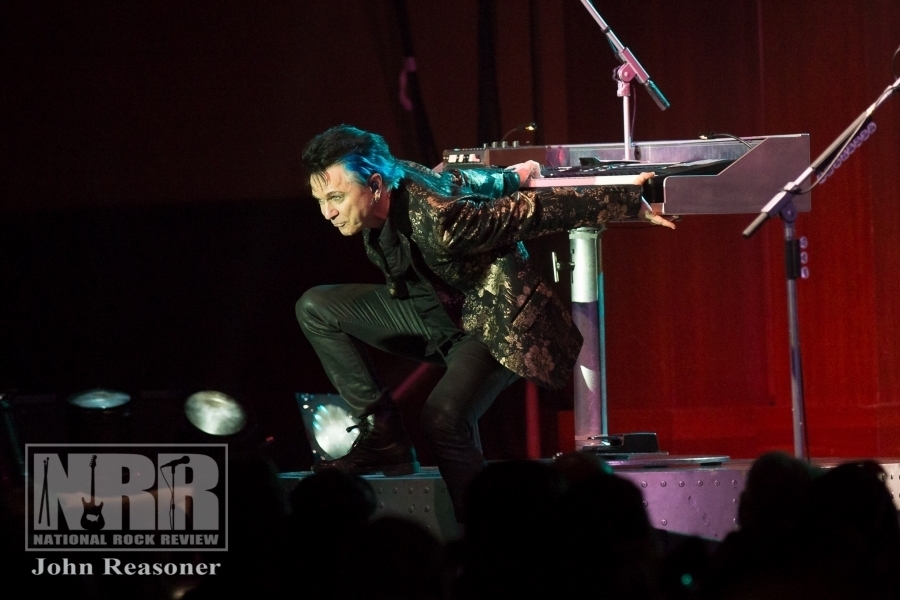 As the show had carried on, some in the crowd had returned to their seats. Next up, Tommy announced that everyone needed to get up out of their seats and rise for the playing “Blue Collar Man (Long Nights).” In between singing, Tommy hooked up with James for guitar solos throughout the song while Ricky moved to the upper platform across the back of the stage overlooking Todd and his behemoth drum set.

Lawrence talked about the great Keith Emerson and how his music touched him. They offered a tribute to Emerson by playing a small piece of “Hoedown,” a keyboard solo before his tribute to David Bowie with the singing of “Changes.”

The band closed their set with “Come Sail Away,” while the crowd excitedly sang along. Lawrence dropped down off his piano raiser and sang as he walked the front of the stage making sure everyone was standing and singing along. When the song ended, the guys left the stage with the crowd wanting more and chanting their name.

After a brief moment, Styx reappeared on stage ready to give the crowd more of what they wanted. As Todd kicked up a beat and Tommy, James, and Ricky struck a chord to “Rockin’ The Paradise,” confetti shot out over the crowd from both ends of the stage. The crowd roared as all three guitarist traveled the stage from one end to the other playing guitar solos while Lawrence, sporting a top hat, sang along with the crowd. As the song progressed, Tommy joined Ricky on the rear upper platform to play another solo.

The show came to a close with Tommy singing “Renegade,” while he and James jam back and forth in a battle of guitar talents. At the conclusion, the band received a standing ovation as the crowd swarmed toward the stage to be able to catch a hand shake.

TheirÂ performance was an example of why their careers have lasted as long as they have. The guys in Styx appear to have fun on stage and feed off the energy of the crowd, while they interact amongst each other. In their many solos, the talent of each player is evident, as is their effort to keep the crowd entertained and on their feet.

With songs that have been passed on from generation to generation, the age of the Styx fanbase continues to expand as grandparents are now being joined by their grandchildren, something sure to keep the “Paradise Theatre” open for a while longer.