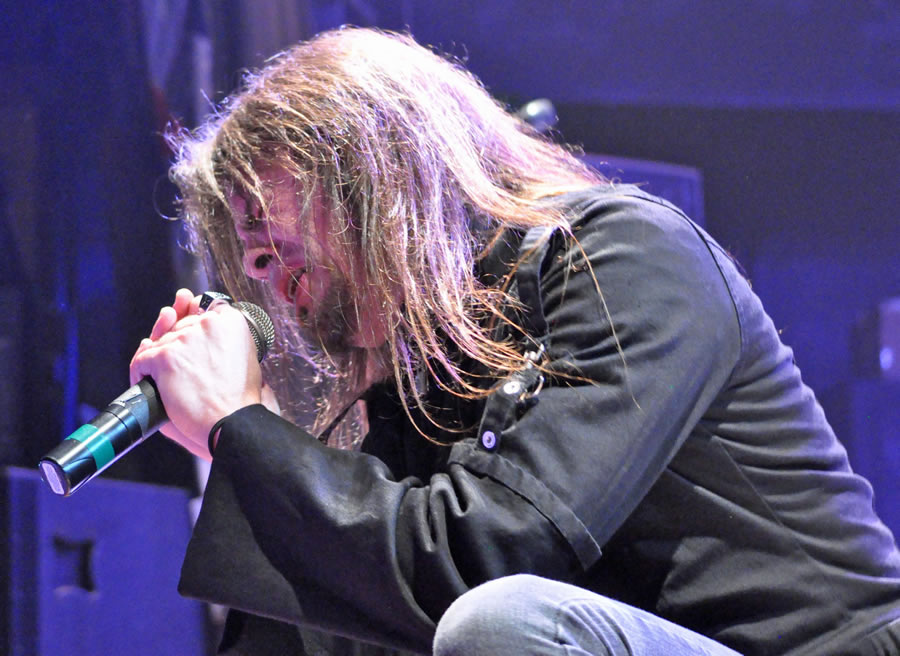 InÂ a sold out show at the House of Blues (HOB) in Anaheim, California during the week of NAMM 2014, a crowd of energetic heavy metal fans and NAMM attendees gathered to see Heaven Below, John Corabi, and QueensrÃ¿che dominate the HOB stage. The massive energy fueled by the performance’s of these incredible musicians was elevated by the dozens of rockstars and music industry heavy hitters in attendance. I graciously stood in the photo pit, looked around and jokingly said to my friend, Nick Culves (Director of CrueFest), if I had a rock, picked it up, and tossed it into the crowd, it would hit a musician in the head!

The first band to take the stage at the HOB was L.A. band Heaven Below. The band is touted as an up-and-coming L.A. band (although they have been around for a few years.) Band founder and lead vocalist/guitarist, Patrick Kennison, is endorsed by BC Rich. Heaven Below has had a couple of successful tours under their belt. They released their self titled album in 2012 with their current line-up of Patrick Kennison (lead vox/guitar), Jesse Billson (guitar), John Younger (bass), Elias Andra (drums).

Their set at HOB, consisted of a selection of songs from their self-titled album and also a few rousing covers, including a killer rendition of Ace of Spades by Motorhead and Heartbreaker by Pat Benatar, all crowd-pleasers that got their fellow musicians and fans in attendance ready for a kick ass rock show!

After Heaven Below, it was time for John Corabi to take the spotlight. John Corabi has been on a two-year long tour run since early 2012 after releasing his first ever solo album, simply titled, Unplugged. While the average person might have been permanently discouraged by the musical hand he has been dealt, John Corabi perseveres by continuing to do the one true thing that he loves, MUSIC!

The highlight of every one of John’s acoustic shows is his humorous, self-deprecating banter with the audience and his number one crowd pleasing song Hooligan’s Holiday. As many times as John has had to play this song, he still plays with gusto and enthusiasm while the crowd sings along, word for word, every time! Kudos to John for being the ultimate, all time HOOLIGAN and taking all of us on holiday with him!

I have been fortunate enough to catch John perform his acoustic album live three times in the past year and look forward to catching him again in a few months after he gets back from the MOR cruise in March and heads back through the Midwest to Detroit. Maybe this time he will perform If I had a Dime, which is my personal favorite off of his Unplugged album.

Following the crowd pleasing performances of both Heaven Below and John Corabi, it was finally time for headlining band, QueensrÃ¿che, to take the stage with powerhouse singer Todd La Torre as lead vocalist. Since Todd joined the band less than two years ago, QueensrÃ¿che has had a fresh shot of energy fired back into their veins and are making musical headlines around the world with the recent release of short film/video Ad Lucem, a new album in the works, and a historical performance recently with Pamela Moore in Washington State.

I have seen QueensrÃ¿che perform three times in the past six months and I can say, without a shadow of a doubt, Todd La Torre’s vocals and live performance are nothing short of incredible! The sheer power that Todd displays on stage as he belts out the iconic Queensryche musical library song by song is mind-blowing. Todd La Torre’s veins pop out of his neck as he leans back, kneels forward, climbs the drum riser, and head bangs with the crowd. Todd sings QueensrÃ¿che songs as they were written to be sung, and then turns it up an extra notch! La Torre is a must see wonder for fans and non-fans alike. Like the absolute professional that he is, Todd comes out and perfectly nails the ball crushing high notes of the QueensrÃ¿che musical catalog at every show!

QueensrÃ¿che were simply incredible in every way at The House of Blues in Anaheim. They have proven not only to be a must-see live band, but also a band with such a powerful energy, which has seemingly been re-fueled by their new singer with the long-lost musical passion that has always been synonymous with QueensrÃ¿che.

I admittedly was not familiar with all the bandâ€™s material before I first saw them perform live in Detroit last July. However, it didn’t take more than witnessing a few songs being performed by this powerhouse band and their energetic lead singer before I was getting lost in the music as if on a spiritual journey through the land of Queensryche! Today I am more than proud to be another self-proclaimed, ‘Queen of the Ryche’! -KK