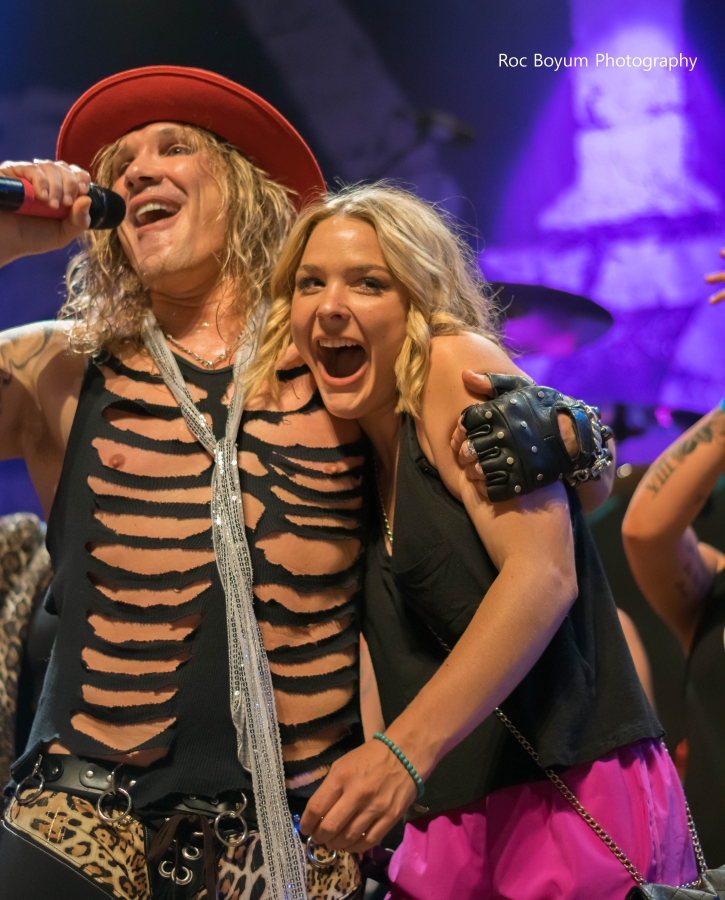 To celebrate the release of their new CD, All You Can Eat, Steel Panther returned to their hometown of Los Angeles at the Hustler Store on Sunset Blvd to conduct a press conference the likes of which have never been seen before.

On April 3, 2014, the Hustler Store in Los Angeles was taken over by the Kings of Carnage. Surrounded by scantily clad Hustler Girls, the band entered the room ready to take on the press and leave no doubt as to why Steel Panther is currently the number one metal band in the world today.

The release of their new CD All You Can Eat, was the most anticipated new CD release for 2014. After the release on April 1, 2014, the CD is already number one on the UK charts and soon to be followed by the other charts worldwide.

After a round of questions and answers only Steel Panther could deliver, the press were treated to a rare acoustic performance by the band featuring two songs off the new CD both showcasing Michael’s vocals and Satchelâ€™s acoustic guitar playing. After the press conference, everyone was invited to a special VIP press party at the famous Rainbow down the street, a party only Steel Panther could deliver.

But no, it doesn’t stop there, four days later the Hometown boys would treat their ravenous LA fans to a special homecoming show at the House of Blues Los Angeles; the club that started everything for this band. This was going to be a big night and everyone knows that nobody goes out in LA especially on a Monday night! But this just shows the magnitude of the bandâ€™s popularity because no one told the loyal ‘Fanthers’ (as the Steel Panther fans are sometimes called) that certain LA rule.

Party Like Tomorrow Is The End Of The World (Explicit – NSFW!)

There was so much incredible energy in the air as the LA home crowd waited in anticipation for Steel Panther to return home from touring the globe after playing major venues and festivals worldwide.  As we waited outside for the House of Blues door to open, we were encased in a sea of people, and you don’t see these types of crowds in LA. We watched as dozens of female LA models dressed appropriately in tight and revealing 80â€™s metal outfits tried to bribe the security to let them back stage to see their heroes. As we all waited, we had no idea of the onslaught we were about to experience!

The doors finally opened and the sea of people turned into a frantic race to secure their coveted spot at the front of the stage. The night was electric and it didn’t take long before the House of Blues completely filled up (which I have personally never seen before). It felt like the HOB staff locked us all in, threw away the key, and there was no escape.

The Burden of Being Wonderful

The opening bands, The Hard Way and Future Villains, were treated to a packed house of fanatical fans ready for an incredible party. After the openers finished their sets, the club began to play the 80’s metal songs with the entire crowd of 1000+ people singing along to every word of ‘Pour Some Sugar On Me’ (Def Leopard) to ‘We’re Not Gonna Take It’ (Twisted Sister) escalating the fervor of the crowd.

The last song before the show began was ‘The Number Of The Beast’ by Iron Maiden. As the curtain began to slowly open, I think the anticipation and energy was too much for the crowd and everyone lost their mind. The band started the night with Pussywhipped and everyone sang along. After the first song, Michael and Satchel spoke to the hometown crowd thanking everyone for being there and to be ready to “f**king party” and they were!

A Steel Panther show is like being invited to the most exclusive VIP rock and roll party that everyone is trying to get into but nobody can (with all the sex, drugs and rock and roll you can imagine), meaning you are one of the elite few that were invited. The non-stop melting pace of the night continued and at one point, Michael looked up into the balcony and asked a girl with brown hair to take her top off; of course she did, for the enjoyment of the entire crowd. Then Michael asked her boyfriend to – well we won’ t go there; but suffice it to say, the boyfriend got a mouthful!

That is just part of the Steel Panther experience, but the surprises werenâ€™t over. Michael found Billy Ray Cyrus in the crowd and brought him up on stage. Billy performed the song Rebel Yell (by Bill Idol) with Michael and him trading verses and Lexi, Satchel, and Stix backing them up. The fun didn’t end there.  Next Michael found Joey Fatone of N Sync and pulled him on stage and together they sang Girl from Oklahoma and he would rejoin the band later for the song Community Property.  The crowd was already in a crazy frenzy. How could they possibly top that??

The set was coming to a close and it was one song before their song 17 Girls. Yes you guessed it – time to pull 17 girls up on stage. So know we know why all those LA girls ran to the front of the stage, to be on stage with Steel Panther as they closed the night with their last song. As the curtain closes and the girls are all ushered backstage to be taken to the exclusive after party with the band.

A truly great show with a really kick-ass band and one of the best vocalists in heavy metal today! If you are over 18 and don’t have a weak heart, I suggest you treat yourself to the Steel Panther experience. For Steel Panther, life is all about the party. If you haven’t seen Steel Panther, get yourself a slice of the most f**king outrageous party Rock and Roll has to offer!

If you missed this show, they will be at the House of Blues LA on Monday, April 14 and April 21!

Check out the live Video from the press conference and the pictures from the HOUSE OF BLUES SHOW!